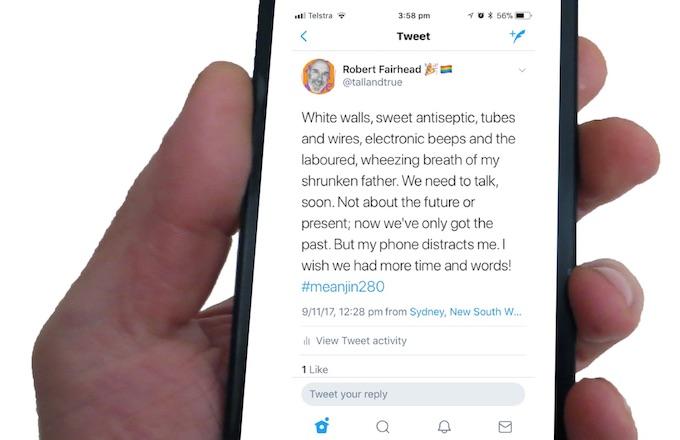 We Need to Talk (Microfiction)

12+   To celebrate the introduction of 280-character Tweets by Twitter, Meanjin Quarterly ran a microfiction competition. The "@Meanjin Twiction" rules were simple: tweet a 280-character story and include the hashtag #meanjin280.

The prize? The top ten stories were published on the Meanjin Blog, and the authors paid one dollar a word.

As I commented in another blog post, Microfiction Dream (June 2018), I discovered microfiction when I reviewed Loopholes by Susan McCreery for the NSW Writers Centre.

I enjoy the challenge of the genre. There is no time for plot and character development; every word must count. The writer plunges the reader into the story and wrenches them back out, leaving it to the reader’s imagination to reflect upon what they have read, what lead to the situation, and how it might resolve itself.

My microfiction piece was spot on 280 characters, including the #meanjin280 tag, or just under 50 words — so that's $50 if the Twiction judges like it!

And yet, as when writing longer-form fiction, the beginning and end came to me first, and I just had to work out how to navigate from one to the other.

We Need to Talk is published on Tall And True. But here's a copy to save you clicking on the link — I hope you (and Meanjin!) like it:

We need to talk. Soon. Not about the future or present; now we’ve only got the past.

But my phone distracts me. I wish we had more time and words.

With thanks to Iván Tamás from Pixabay for the phone image.

N.B. I didn't win the $50 or get published on Meanjin's blog. But I repurposed the story for another microfiction competition run by the Australian Writers' Centre in 2019, as We Need to Talk in 29 Words. And [proud puffing of cheeks] this was published on their blog!