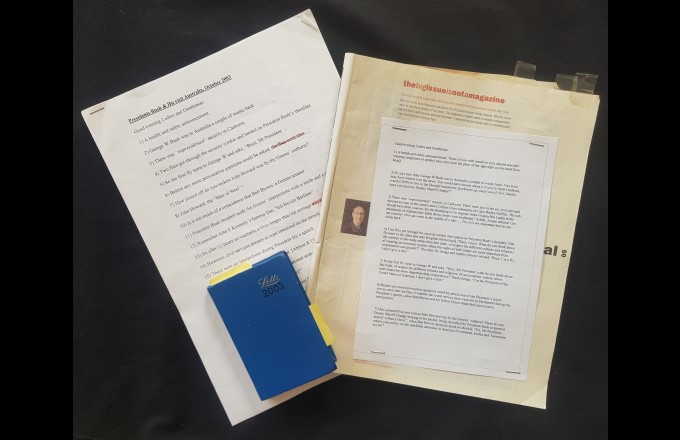 My One Night Stand

12+   In my writer bio on Tall And True, I admit I've enjoyed a one night stand. It was November 2003, but I remember the night like it was yesterday. I had worked up to it for two weeks. However, though I'd practised my lines, I suffered first-time jitters as I took the stage to perform my stand-up comedy routine.

I had signed up for the two-week comedy writing course offered by my local community college in October 2003.

Over the years, I've attended many mid-week and weekend college courses, from bricklaying to astronomy, psychology and philosophy, and playing the guitar and ukelele. I'd even studied Mandarin to help my son with his schoolboy language classes. (Nowadays, the best we can manage is "Ni hau" and "Xiè xie".)

But comedy writing was something I'd wanted to explore for a long time.

My 2003 diary records a fittingly farcical start to the first morning of the course:

Saturday 25 October: Got lost and ended up in a bookkeeping class. But didn't realise until AFTER I'd helped them rearrange tables and chairs.

Made my apologies and joined an odd assortment of fellow students testing the waters of comedy writing. Among us was a hard-of-hearing older gentleman, John, who regaled the class all day with amusing tales from his apprenticeship — served in the 1930s!

Left feeling a little disgruntled. I'd signed up to learn how to write comedy like Ben Elton, with a political message. But the tutor's exercises had me generating lines about "gherkins" and "dog poop".

Hopefully, the creative comedy juices will flow more freely (with an edge) during the week.

Back in October 2003, my son was a sixteen-month-old toddler. I worked part-time as a freelance contractor and was "Mr Mom" at home with him three days a week. And this meant I didn't have much creative "me" time before the next class:

Friday 31 October: Put off working on my comedy sketch until the last minute and stayed up to 2:30 AM. Wrote about recent visits of Presidents Bush and Hu to Canberra, taking the piss out of both sides. And the reaction to the visit of the alternative political parties.

Enjoyed the process but couldn't land an ending. The sketch seemed to be drifting without a destination. Rather than worry, I let it drift and relied on the right words popping into my head, as I've done with other writing.

It's nice to be an "experienced writer" and not get stuck on things like endings!

My diary entry for the following day notes, I woke "absolutely knackered" after a late night of writing — and no doubt an early morning with my toddler son:

Saturday 1 November: Turned up late for week two of the comedy course to find only the tutor and "Old John" present. A couple of other students sauntered in after me, but three others appeared to have bottled out.

Once again, I wasn't keen on idea generation exercises. Especially as I kept coming back to gags about "gherkins" and "dog poop"!

What I wanted to do was sit by myself and polish my political sketch. Tutor said it "showed promise". But the proof will be next Tuesday, at the open mic!

When I signed up for the course, I thought it was to learn comedy writing skills. And, as noted in my diary entries, I wanted to write comedy with an edge, like Ben Elton.

But on our first morning, the tutor had told us he'd booked an open mic night at an inner-city pub, where we were to perform with other wannabe stand-up comics. After our second and final class!

I suspect it was "stage fright" that caused numbers to halve for that second class. And it worried me, too. Following another busy weekend, I only had two days to finish writing and start practising my routine:

Monday 3 November: Should have spent the afternoon working on a billable project. But instead, I focused my efforts on the comedy sketch.

At last, it has an ending, one which closes the circle of the opening and middle bits.

Now all I have to do is memorise the lines. And stop rewording it!

A vain hope because, as the years since have proved, I always edit, tweak and reword my writing.

The Tuesday of the open mic evening was also Melbourne Cup Day in Australia. Despite only being a contractor, one of my customers had invited me to participate in their Cup Day lunch. And like the race, the festivities ran long into the afternoon.

Afterwards, I had to rush to collect my son from childcare. And as we walked home, daddy entertained him by practising my comedy routine and tweaking it!

I was still reworking the sketch when I should have been heading to the pub. And for a moment, I considered joining the other half of the class and bottling out of the night — I had wanted to write comedy, not perform it!

In the end, I realised I could deliver my lines but only if I could read them. So I cut the script into A5 pages and stapled them inside my October edition of the Big Issue magazine, a perfect prop for a political comedy sketch.

The tutor had organised a running list of current and former students for the open mic night. Most were funny, and some of the alumni had had professional gigs. And no one read from a script. Until ...

Tuesday 4 November: Walked up, took the mic and opened with, "Oh, look what it says here in the Big Issue ..." Despite lack of eye contact as I read and performed the sketch, my lines got a few laughs. And I soon got over the jitters and enjoyed the adrenalin rush of being on stage.

Others from my class had mixed success. But Old John's magic tricks provided a surprisingly entertaining finale.

It's eighteen years since my one night stand. The final entry in my diary for the evening was the question, "Will I do it again?" To which I'd answered, "Maybe."

Re-reading my Two Presidents comedy sketch (stapled inside the now yellowed Big Issue), I still find it amusing and pointed. Though the political material is dated, and the writing needs an edit (surprise!). And, upon reflection, there are cheap gags of which I'm not proud.

It's unlikely I'll ever take the mic on a stand-up stage again. But maybe I could tweak the script and narrate it for the Tall And True Short Reads podcast?

N.B. You might also like this earlier homage to my diaries, 32 Years of Diaries. I wrote the memoir piece in 2018, so I have another three years of diary entries to add to it!