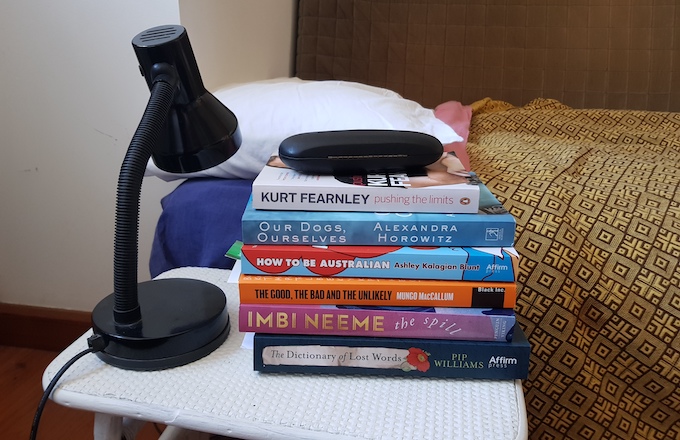 12+   Ever since my childhood, I've loved reading books. Even in my teens (unlike my son, sadly), I read most nights, and in my career-driven twenty-somethings, I kept up the reading habit with short stories. Now middle-aged, I still love reading, though rather than one book, I have a pile of beside books!

I thought I'd share my current bedside pile (as of the end of June 2020) in this blog post. Some of the books I'm well into and others I've just started. So I didn't think it would be fair to the authors to précis or review them.

Instead, I've borrowed from my #tallandtrueweb series on Instagram and posted the #bookcovers and #firstsentences from each book. For me, covers, like the ones in my bedside books, are what make readers pick up a book in a bookshop (or click on it online). But as I observed in a Writing Tips piece, I find first sentences to be a fair judge of whether or not I'll enjoy reading a book.

Another tip: click on a cover to learn more about the book or to buy it on Amazon.com.au — doing so helps support Tall And True.

Pushing the Limits by Kurt Fearnley

Who would have guessed vomit would be so hellishly slippery? I mean, I have crawled through and across almost everything you could imagine, but I had no idea that vomit on the carbon-fibre deck of a racing yacht is about as slick as it gets. It's like that game where kids squirt detergent on a plastic strip, turn on the garden hose and take a flying leap. You don't have a hell of a lot of control over where you will end up. 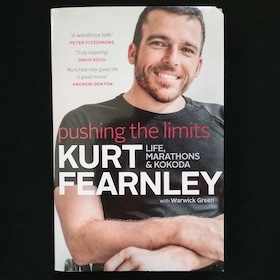 Our Dogs, Ourselves by Alexandra Horowitz

Once a dog has your heart, you are stuck: there is no undoing it. Scientists, ever unromantic, call it the "dog-human bond". "Bond" captures not just the tight connection, but also the reciprocity; not just the mutuality, but also the affection. We love dogs and (we assume) are loved by them. We keep dogs but are also kept by them. 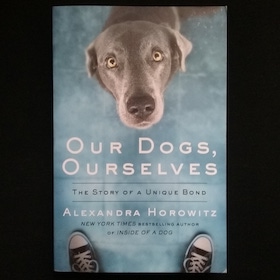 How to be Australian by Ashley Kalagian Blunt

I caught a glimpse of Sydney's skyline in the early morning sunlight as I stepped from the jetway into the terminal. It was 2011. The sun glowed, infusing the city. Fine clouds stretched across the sky in streaks. Anticipation crackled through me. I squeezed Steve's hand, his wedding band pressing into my finger as he squeezed back. 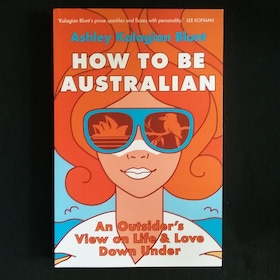 The Good, the Bad and the Unlikely by Mungo MacCallum

Australians aren't very fond of their politicians, alive or dead; we have raised no great monuments to our former leaders. We have no Lincoln Memorial, let alone a Mount Rushmore. But in the Victorian city of Ballarat, which has the distinction of being represented by two prime ministers — Alfred Deakin and James Scullin — there is an exception. In the well kept Botanic Gardens, near the lake, is the Prime Ministers Avenue: a double row of bronze busts of our heads of government from federation to the present day. 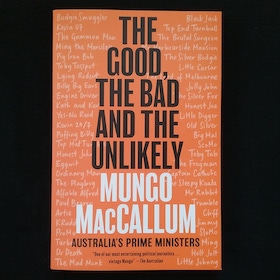 The Spill by Imbi Neeme

The two girls waited for their mother on the verandah of the Bruce Rock pub, which offered shade but little relief from the heat of the late afternoon. They swung their legs while they waited, slowly stirring the hot air and red dust, while the dogs around their feet lay panting, waiting patiently for their owners inside. The girls' mother, Tina, was also inside, matching the locals middy for middy. 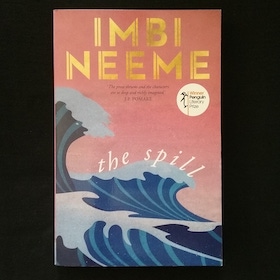 The Dictionary of Lost Words by Pip Williams

Scriptorium. It sounds as if it might have been a grand building, where the lightest footstep would echo between marble floor and gilded dome. But it was just a shed, in the back garden of a house in Oxford. Instead of storing shovels and rakes, the shed stored words. Every word in the English language was written on a slip of paper the size of a postcard. Volunteers posted them from all over the world, and they were kept in bundles in the hundreds of pigeon-holes that line the shed walls. 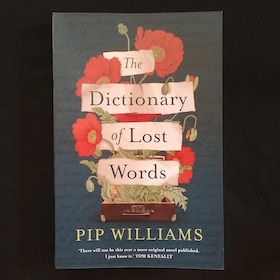 As I admitted in my Large Print Editions blog post, after ten to fifteen minutes of reading in bed, my eyes get a *little* tired. And sometimes (often!) I wake to find the book resting on my face. Which is why, along with reading several books at a time, it takes me so long to finish a book.

But, I'm enjoying rotating through my current bedside books. And I hope to finish a few of them in July because I've got several more piles waiting to be read in my bookcase!