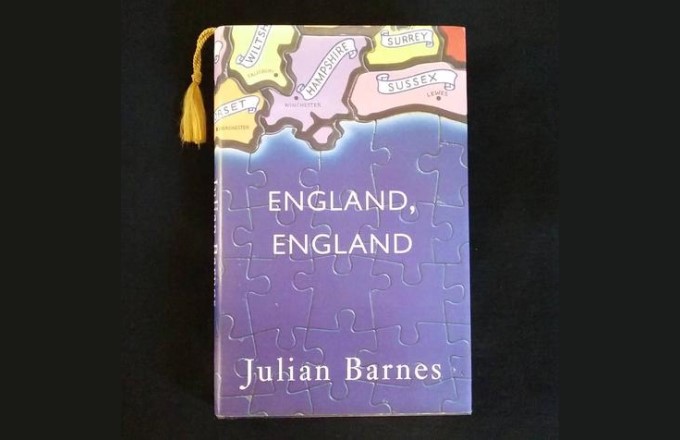 12+   On a recent ABC Nightlife episode, host Indira Naidoo asked, Do you judge a book by its cover? I have blogged several times about my #bookcovers and #firstsentences homage on Instagram. But the focus has always been on first sentences. And the Nightlife episode had me wondering, Could I pick my favourite book covers?

As I admitted in The Man Behind The Woman in the Window blog post, I'm a sucker for a good book cover. In my sales and marketing days, I learned the purpose of an image or graphic in advertising is to stop you browsing, whether it's print media, the internet, or a bookshop. With your attention piqued, marketers hope you will read the advertising text, or in our case, the cover blurb or opening lines, and take action.

That is, buy and read the book!

Scrolling through my Instagram posts, apart from staid reference books, a few anthologies, and retro-orange Penguins, most covers would catch my eye in a bookshop. And, surprise, surprise, this is why the books are in my bookcase!

But if pressed for five favourites from my 600 plus posts, these are the book covers I'd pick — I've also added notes on my connection with each book: 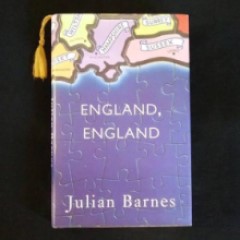 I lived in England from 1987 to 1995. And when I returned to Australia in 1996, I felt "homesick" for England for a few years. But the pastel-coloured jigsaw map of the Southern Counties of England on Julian Barnes' 1998 book (of places where I had lived) was familiar and comforting. As was his setting of "Old England", even if it was fiction. 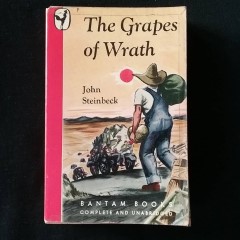 The Grapes of Wrath by John Steinbeck (Bantam Books 1945)

I read The Grapes of Wrath during my classics-catchup phase in my late twenties. The cover of my 1946 Bantam Books edition portrays the plight of the Oakies in a simple yet striking image. But while I loved the book, I was struck by how Steinbeck seemed more sympathetic to the dispossessed Oakies than the Native Americans before them. 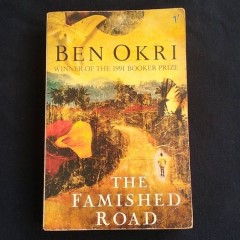 I bought The Famished Road shortly after Ben Okri won the 1991 Booker Prize. The stunning cover reflects the magical quality of the book. As perfectly described in this quote on the back cover blurb: "When I finished the book and went outside, it was as if all the trees of South London had angels sitting in them." (Linda Grant, Independent on Sunday) 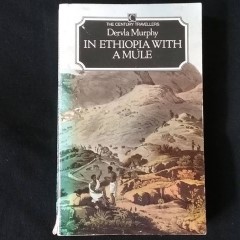 In Ethiopia with a Mule by Dervla Murphy (Century Publishing 1968)

In Ethiopia with a Mule was my first Dervla Murphy travel book, which I bought for seven pounds in England in the late 1980s (discounted "due to slight stain"). Although I was familiar with the "intrepid Dervla" from a travel writing anthology, it was the nineteenth-century lithograph cover of the Ethiopian Highlands that caught my eye. 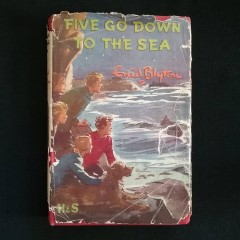 As a child, I devoured Enid Blyton's Secret Seven and Famous Five series of books. And they inspired me to write my own Blytonesque tale when I was ten, Sand Island. Five Go Down to the Sea is a secondhand book I bought for my son when he was tennish. The cover is well worn but captures the Five at the start of another "ripping adventure".

In addition to the 600 plus books posted to Instagram, I still have hundreds in my bookcases and boxes in the attic. I've narrowed down my favourite book covers to five, but it's like being asked to choose your favourite children. (Fortunately for my son, he's an only child!)

I could have mentioned many more book covers, like Sally Morgan's My Place, Jostein Gaarder's Sophie's World, or any of J.K. Rowling's Harry Potters. (Links to Instagram posts.)

But I feel one book cover deserves an honourable sixth mention: 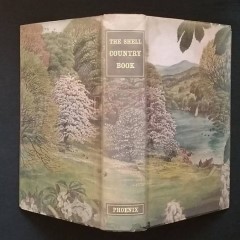 In February 2021, I plucked a secondhand copy of The Shell Country Book from my bookcase and posted it to Instagram. When replacing the book, I realised it had a beautiful wrap-around cover of the English countryside. So, I deleted the original post and retook the photo to showcase the scene on the book's front, back, and spine. (I bought this 1962 edition for two pounds when I lived in England.)

And I later discovered another book I'd posted to Instagram in August 2020 had a similar beautiful wrap-around cover, James Gurney's Dinotopia. If only I could update the photos in my Instagram posts!

Here are links to other posts and articles I've shared on Tall And True about my #bookcovers and #firstsentences series on Instagram :

While the focus of these pieces is primarily first sentences, book covers are also featured. And you might like to browse the @tallandtrueweb posts on Instagram and see if you agree with my five favourites and honourable mentions.

Let me know, either way!