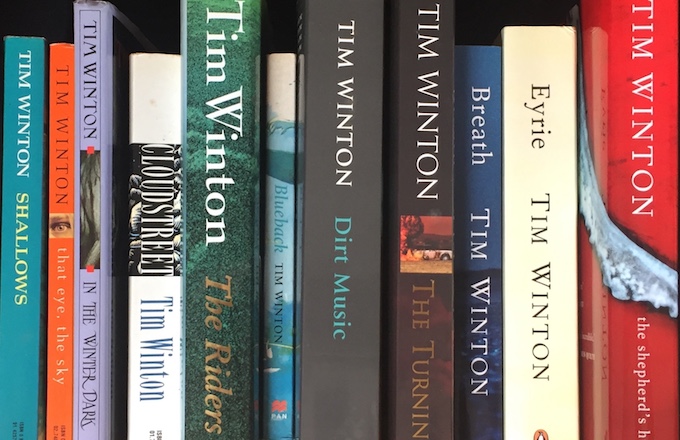 12+   In May 1992, I returned to Australia for a holiday from England, where I'd been living and working for several years. At the time, the local literary news was full of the success of Tim Winton and his novel, Cloudstreet (Amazon link). I thought it an omen.

Winton was thirty-one-years-old, and I was thirty. He had grown up in Western Australia (W.A.), and so had I. He'd just won his second Miles Franklin Award, and I'd just quit my job in England and was about to have a second crack at being a writer!

Among mementos from this period is a yellowed newspaper cutting from the Sydney Morning Herald, dated Wednesday, 27th May. Under the headline, "Winton finds selling words the hard part", Winton, who was on a bookselling tour in America, confides:

My travel diary from back then also has several entries about Winton and Cloudstreet. On 7th June, I went for an evening stroll along Bondi Beach and browsed in a bookshop where I found a copy of the book — though I merely commented: 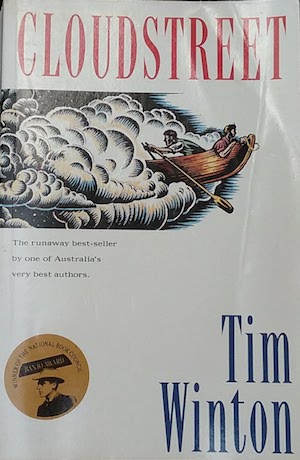 "Didn't sleep well overnight. Mind racing with Cloudstreet, my short story [I wrote short stories almost every day back then], England, the future and past, etc. etc."

On 28th June, my last night in Perth, I recorded in my diary:

"Finished Cloudstreet. End of the book has a similar mystical feel to Ben Okri's The Famished Road [the 1991 Man Booker Prize winner I read before Cloudstreet]. Doubt I'll ever be able to write as well as either author. Still, hope springs eternal."

And on 29th June, before heading to the airport for my flight to England, I asked my father to drop me in town and later wrote:

"Walked through Mall to bookshops. Found Tim Winton books on shelves, but not the one I wanted [his first Miles Franklin Award winner, Shallows]."

I returned to England, returned to writing, and didn't get published. But I did find Winton's Shallows (Amazon link). And I built a collection of his books over the years in England and back in Australia.

It may not have been an omen that Winton and Cloudstreet were in the news in 1992. However, I did find the connections between Winton and myself, and between the characters and setting in the book and my background in Perth, mystical.

And I enjoyed his fresh, colloquial dialogue and narrative. Cloudstreet inspired me to keep reading Winton's books and to keep writing.

N.B. I received Winton's latest novel, The Shepherd's Hut (Amazon link), for my fifty-sixth birthday this year. An omen or more inspiration? Perhaps both!

May 2019 Update: It took me a while to work through my to-be-read pile and reach The Shepherd's Hut. But when I finished it, I wrote another Winton blog post, Tim Winton Wows Again.