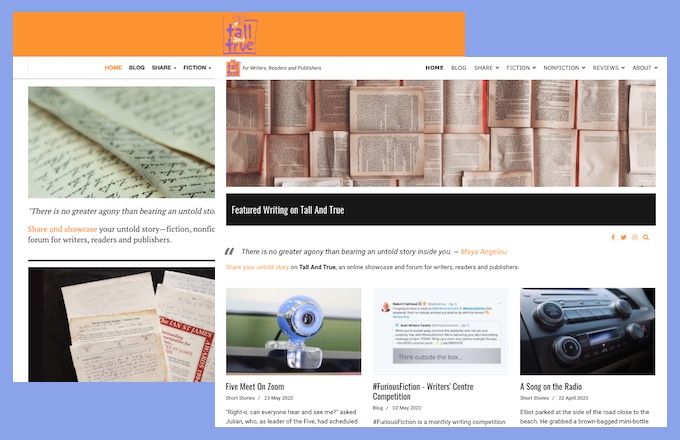 Tall And True - A New Chapter

12+   In 2001, I had a bright idea. I'd combine my love of writing with my software skills and create a writers' website, a forum where writers could share and showcase their work, readers could enjoy a wide range of writing, and publishers could unearth new talent. But it took sixteen long years to launch Tall And True!

There were many reasons for the delay in realising the bright idea (my dream!). For a start, the technology I planned to use for Tall And True in 2001 wasn't as website-friendly as I'd hoped. Though, to be fair to the technology, my software developer skills weren't up to the task, either.

Back then, there were no website builders like Wix and Squarespace, nor even open-source website platforms like Joomla or WordPress. Instead, you had to know how to code in HTML, Java and Javascript to make a website. And I didn't know any of that!

A further diversion arrived in 2002, with the birth of my son. Fatherhood changed my priorities, and I settled into being a work- and stay-at-home-dad (and changed nappies!). But I still loved writing, and I kept my writers' website dream alive by regularly renewing the Tall And True domain name. 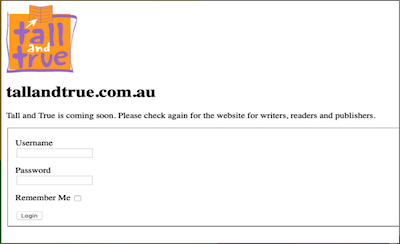 In 2008, a friend suggested I look at the Joomla open-source platform to build a website for my local (not-for-profit) dog training club. Although less technically challenging than HTML, Java and Javascript, I still had a steep learning curve with Joomla. But thankfully, at this time, I discovered the Sydney Joomla User Group (JUG).

One of the upsides of open-source platforms is the community of developers and enthusiasts prepared to share their experience and expertise with newbies like me! And thanks to the Sydney JUG, I built the dog club website and started exploring how I might use Joomla for Tall And True.

One of the downsides of open-source platforms is the bewildering array of website templates and extensions for delivering beyond the basics. It's like trying to select your favourite assorted cream biscuit. The temptation is to gorge yourself on the lot, and you end up feeling bloated and sick. And that's how many of my early attempts with Joomla and Tall And True looked and felt!

However, in 2016, I stumbled across a magazine template by Joomlart, which, out-of-the-box, presented stories in an attractive and browsable format. It just needed a little tweaking, customising colours, layout and functionality, to make it look and feel like my dream Tall And True website. 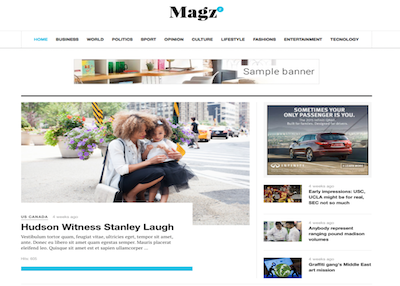 Despite having found the near-perfect template, and my growing competence with Joomla and continued involvement with the Sydney JUG (where I now helped newbies!), another year rolled over on my wall calendar without a website.

Finally [fade in drum roll, please], in 2017, I finished fiddling and faffing and launched Tall And True. And fittingly, it was at the August meeting of the Sydney JUG.

My dream was a reality, and after sixteen years, I had a website where I could share and showcase my writing and invite other writers to do the same. 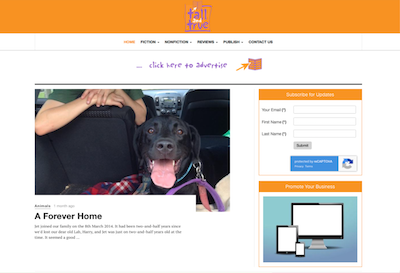 In August 2019, I marked Tall And True's second anniversary with a presentation at Joomladay Australia in Brisbane on how Joomla had helped me realise my dream writers' website. And in April 2020, I gave a talk via Zoom at the inaugural Australian Virtual JUG meeting on how I had built a blog into the website.

At both presentations, I knew many in the audience from my long-term involvement with the JUGs and other Joomla events. For example, Britt Ambrose, the deserved winner of the Most Attractive website category at the 2019 Joomla Australia Site Awards.

I chatted with Britt after my April JUG presentation and mentioned I had been thinking of updating Tall And True. While the website was only two-years-old, the customised template was four-years-old and was starting to look dated (especially compared award-winning sites like Britt's!). But, as I explained to her, I didn't fancy a sixteen-year upgrade process!

Displaying the Joomla community spirit of sharing experience and expertise (even with not-so-newbies, like me!), Britt offered to help with a template recommendation and layout guidelines. We had a couple of short Zoom meetings and a few chats via Messenger, and I spent a month building and testing Tall And True's new chapter.

On 22 May, I launched the new-look (current) website. As I commented to Britt, I am delighted with the cleaner look-and-feel of Tall And True. And I think it will prove easier for writers, readers and publishers to browse and enjoy the stories, articles and blog posts.

The new chapter, original Tall And True, and the dog club website would not have been possible without the Joomla open source community. I hit more than a few roadblocks and detours on my long journey with Tall And True. But thanks to the Australian JUGs, Joomla forums and friends I've made along the way, I arrived at my destination. Later than planned, yes, but safe!

I hope the new-look Tall And True engenders a similar spirit and encourages writers to share and showcase their writing. How about you?

N.B. You might like to read the first home-page feature piece on Tall And True, A Forever Home, about my rescue Lab, Jet.