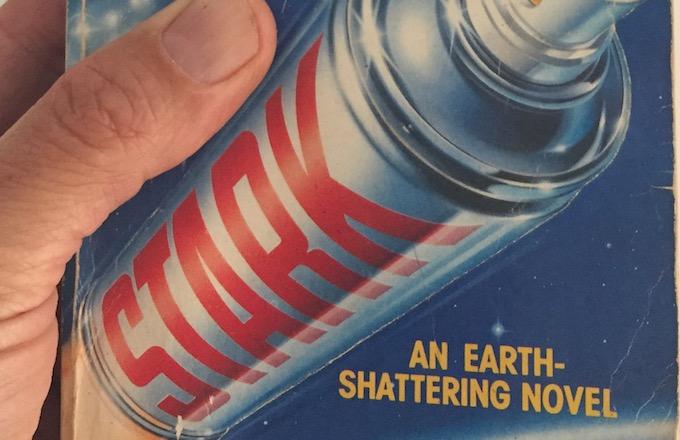 -18   In October 2017, I attended a premiere screening of Three Summers. After the film, there was a Q&A session with the writer/director, Ben Elton.

As I commented in a film review on Tall And True, I have admired Ben Elton's work since watching him do stand-up comedy on TV in England in 1987. I also loved the hit TV series he co-wrote in the 1980s and 1990s, The Young Ones and Blackadder.

And I have enjoyed reading his novels, from Stark in 1989 through to Time and Time Again in 2014. So it was a great privilege to meet Ben in person after the Q&A. And to have him sign my yellowed copy of Stark, 30 years after I first fell in love with his work.

Back in 1989, environmental awareness and eco-protests were on the rise. World leaders were forced by scientific and public opinion to finally ban the chlorofluorocarbons (CFCs), which had created a continental-size hole in the ozone layer. There was growing recognition of how humanity was trashing the planet and that we have no "planet B".

The world had also plunged into an economic disaster, with the Black Monday stock market crash of 1987 triggering worldwide recessions. And yet, among our rulers and the monied class, Gordon Gecko's "greed is good" maxim seemed to hold sway over the cries of, "What the heck are we doing to our planet!?"

Starting with Stark (1989) and followed by Gridlock (1991) and This Other Eden (1993), Ben created an eco-novel genre of his own. His trademark combination of keen observation and scientific insight and sharp wit and writing skills held a blow-torch to the bloated belly of capitalism and its siblings, corporate excess and environmental vandalism.

Ben spoke to my broadening late-twenties mind. He encouraged me to act and argue for our pale blue dot in the inky universe. And I often quoted passages from Ben's eco-novels in my arguments — the closing paragraph of Stark is burned into my soul, a sad, searing summary of humanity.

I mentioned this to Ben when he signed my copy of Stark. However, after writing fifteen novels, numerous TV comedies, two musicals, and two films, it was hardly surprising he didn't remember the paragraph. And so I had the pinch-myself honour of reading it to him.

Sorry, no spoilers — you'll have to read it for yourself in Stark!

I don't know how Ben felt hearing those last lines after all this time, but re-reading them sent the same tingle up my spine as when I first read Stark back in 1989.

A Pom looking into Australia

I also reminded Ben of a comment he'd made in the Q&A, how he'd been a "Pom looking into Australia" in 1988. He was on a tour Downunder with fellow comedian Rik Mayall and fell in love with the bass player of their backing band. And this led to Ben staying and setting his debut novel, Stark, in Western Australia.

Having spent half of the past 30 years in Australia with his wife and kids, he said he felt like an Aussie when writing and directing Three Summers. "It's an Australian film, with an Australian cast and crew," Ben said with pride.

But he kindly agreed to jot that early "Pom" quote in my 30-year-old copy of Stark: 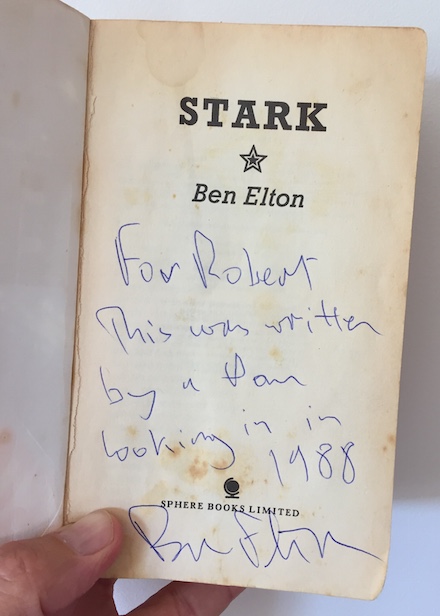 A secret planet B?

Okay, so Ben and I didn't save the planet in the 1990s, and the existential threat of climate change has replaced the fears of toxic air and water pollution that pervaded his eco-novels. And yet, despite the scientific evidence, there are sceptics, deniers and uber-rich who would have us carry on as always, preaching "growth is good". Just as Ben warned in Stark and his other eco-novels.

It has me wondering if it's because they've got an escape plan, as Ben envisaged? They've found a "planet B", to which we, the ordinary people, won't be invited! We've reached an age where people and planets are as disposable as our gadgets.

Perhaps it's time for me to re-read Ben's signed copy of Stark and to start arguing and acting again for our pale blue dot!

It's four years since I wrote this blog post and thirty-two years since I read Stark. Who would have imagined back then the present-day spectre of a global environmental disaster while billionaires blast into space? Ben Elton, that's who!

N.B. I've also shared this post on my blog at RobertFairhead.com. And I've narrated Signed Stark by Ben Elton for the Tall And True Short Reads podcast.