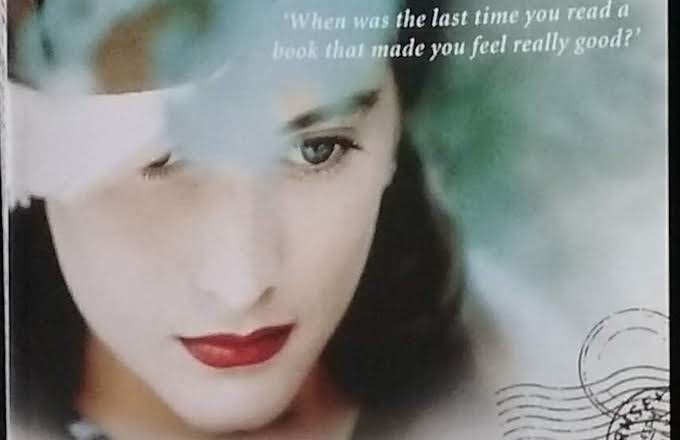 12+   My teenage son was out for the night on the weekend, so my wife lined up a British period drama movie on TV, The Guernsey Literary and Potato Peel Pie Society. I loved it, though I was thankful I had a box of tissues handy. And afterwards, I was keen to read the book upon which the movie was based, written by Mary Ann Shaffer and Annie Barrows.

The story is set in post-war reconstruction, 1946 Britain. Juliet Ashton is a successful author, but she suffers from a combination of writer's block and post-traumatic stress from living through the Blitz years in London.

Juliet receives a letter from Dawsey Adams, a resident of the Channel Island of Guernsey, who explains he has acquired a book Juliet once owned and enquires whether she knows of a bookshop in England where he can buy another title by the same author. And this sets in train correspondence between Juliet and Dawsey, a member of The Guernsey Literary and Potato Peel Pie Society.

In flashbacks, the movie reveals how the Society was formed during the war years under German occupation. At first, it was a cover for the killing, cooking and consumption of a contraband pig. But over time, the Society becomes a focal point of resistance to the mental yolk of occupation. Members feel free to speak their minds about literature, even when their meagre rations reduce them to eating potato peel pie at their evening gatherings.

Through her blossoming correspondence with Dawsey and others of the Society, Juliet feels drawn to the island and its people and their stories of the war years. And she accepts an invitation to attend one of their literary meetings.

This blog post is not meant to review the movie — I hope to do so after reading the book. My wife had a copy, she gave it to me that night, and in the introduction, I read the following:

The Guernsey Literary and Potato Peel Pie Society is a first novel from 70-year-old former librarian Mary Ann Shaffer. She first became interested in Guernsey when visiting London in 1976. On a whim, Mary Ann decided to fly to Guernsey but became stranded there as heavy fog descended and no boats or planes were permitted to leave the island. While waiting for the fog to clear, Mary Ann came across a book called Jersey Under the Jack-Boot, and so her fascination with the Channel Islands began. 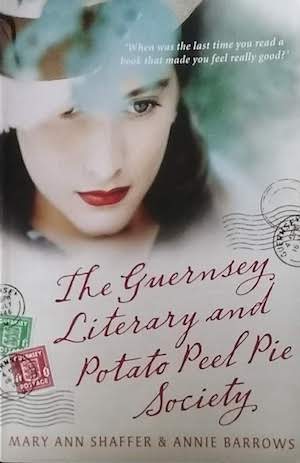 I was impressed. Like Mary Wesley, who published her first adult fiction when she was 71-years-old and her most famous novel, The Camomile Lawn, when she was 72, Mary Ann was a "late bloomer" and a cause for hope for this younger wannabe writer. And her choice of subject, Guernsey during the German occupation, was obvious, at least in hindsight, as further explained in the introduction:

Many years later, when goaded by her own book club to write a book, Mary Ann naturally thought of Guernsey. She chose to write an epistolary novel because, 'for some bizarre reason, I thought it would be easier that way'. First her family, then her writing group, and then the publishers around the world greeted her manuscript with avid enthusiasm, recognising a true gem.

Again, a tale of hope for an aspiring author, laying out the ingredients for a successful novel: a compelling subject, lots of time (and talent) and a supportive writers' group. But why, I wondered, is The Guernsey Literary and Potato Peel Pie Society credited to two authors? I read on:

Not long after the sale of her manuscript, Mary Ann's health declined, and her niece Annie Burrows — a successful author in her own right — undertook the edit. Tragically, Mary Ann died early in 2008 without seeing her book in print.

I was dumbstruck and felt like reaching for my box of tissues again. It seemed so unfair that Mary Ann had died without seeing her novel in print. Or seeing it in bookshops. Or going to book signings. Or reading reviews. Or even hearing the applause of her fellow book club members. Let alone seeing her novel transferred to the big screen.

The book's introduction closes with this solace for the reader on Mary Ann's untimely passing:

She has left the world an unforgettable legacy — the heartwarming, moving story of The Guernsey Literary and Potato Peel Pie Society.

I loved the movie, and I look forward to reading and reviewing the novel. I'm sure I will be adding my voice to the chorus of thanks to Mary Ann Shaffer for having conceived and written such a beautiful story and to Annie Barrows for completing her aunt's literary legacy.