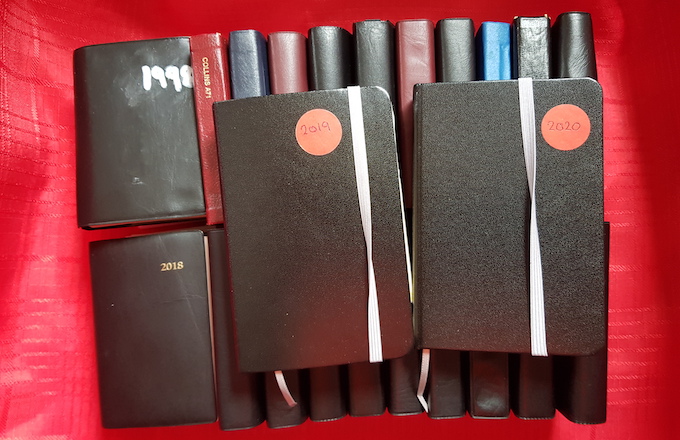 12+   I have kept diaries for thirty-three years. For twenty-one of those, I used the Belmont A7, day-to-a-page, pocket-diary. Its twenty lines per page proved a perfect fit for my daily entries. However, last August, I lost my 2019 diary and discovered the joy of not being constrained to a page per day.

In my early years of diaries, I only recorded occasional highlights, and slimline week-to-a-page diaries, with space for a paragraph per day, suited my purpose:

28 December 1987: Our first full day in Wales. We visited Caernarfon, Mt Snowden and Beddgelert. I bought a pair of Wellies in Caernarfon.

However, by 1998, I had become a little more descriptive and needed more room to record my thoughts (and fantasies) — so I switched to Belmont A7 diaries:

16 February 1998: First day working for myself. Rearranged the second bedroom into a home office. Uncovered piles of memorabilia, including old photos, letters and passports etc. Tempting to slip passport into my pocket and go! Go where? Who knows, the temptation seems to be flight. I've had similar flight fantasies since I was a kid. Perhaps that's what I liked about my backpacking days? Travel was my fantasy fix. Back to reality, I filed my passport and finished setting up the home office.

After 1998, I still only recorded highlights. But in 2005, I made a New Year's resolution to write in my diary every two to three days, a goal which soon became every day. Over the years, I pushed the limits of the Belmont A7's twenty lines. And I started writing in the header and footer, and even the margins, as I did on 10 and 11 April 2012 at Uluru. 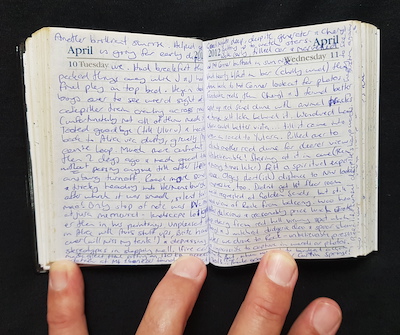 And then in August 2019, I lost my diary, the second time I'd done so in thirty-three years. With no 2019 diaries in the shops, I bought an A6 notebook journal and recreated eight months of entries from my Facebook and Instagram posts.

Rather than a chore (as it had been for my first lost diary in 1992), it was an enjoyable task, with pleasant posts and photos to jog my memory and no page-per-day constraint. By the end of the year, I'd filled up the journal and used mini-notepads for my final diary entries. 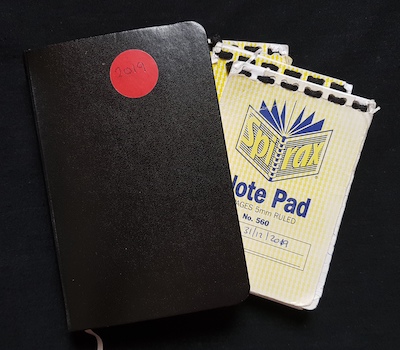 I bought a new Belmont A7, day-to-a-page, pocket-diary for 2020. But as the smoke cleared from Sydney's New Year's fireworks, I realised I preferred an unconstrained journal to record my daily entries.

And so I've moved on from the Belmont A7s and will use another A6 notebook journal for 2020, to record one or many pages per day.

In his Diaries 1969-1979 The Python Years, English comedian, actor, writer, traveller, and diarist, Michael Palin, commented on the loss of one of his notebook-diaries:

Momentarily bereft, I felt like giving up the diary altogether but the loss made me realise that it had become such a part of my life, that it was inconceivable to jettison it. If anything, I compensated by writing more.

Losing my 2019 diary was a nuisance. But it's given me the freedom to follow Palin's lead and write more in my thirty-fourth new year diary.