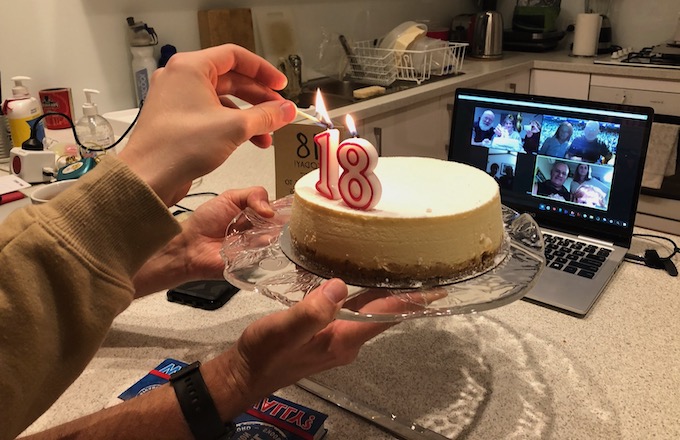 Love Being a Dad

12+   Life began at forty for me. Obviously, I’d had a life before my fortieth. I’d travelled and lived overseas, changed careers (several times), got married (once), bought cars and property, and owned a dog. But the birth of my son in 2002 changed everything for me. And I learned the joy of being a dad.

My wife and I had put parenthood on hold early in our relationship, prioritising travel and careers. However, on my thirty-ninth birthday in March 2001, she handed me an anonymous-looking envelope. Inside was a card with a baby on the front, and in it, she had written, “If you’re still willing to be the house-dad, I’ll give parenting a try.” 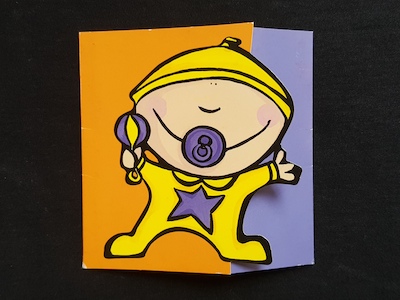 And so, heading into my fortieth year, I set sail on a life-changing odyssey. As with Homer's Greek hero Odysseus, it wasn't all smooth seas. Around this time, I read Inconceivable by Ben Elton (Amazon affiliate link), a humorous and touching tale of a childless couple's attempts to conceive. Elton loosely based the novel on his trials and tribulations with IVF, and it wasn't long before I was living scenes from the book!

Those who claim childbirth is a “beautiful experience” must be speaking of the birth itself. Everything leading to the miracle moment when the baby appears is awful. The mother is in agony, and the father feels useless and guilty for having caused so much pain. I broke down when Junior’s head finally emerged, and the doctor turned him around to face us. And I was still sobbing when it was my turn to cradle our newborn son.

Of course, we didn’t name our son “Junior”. Soon after his birth, my wife asked if we could call him Jaiden, one of the three names we’d shortlisted. I told her I didn’t care. I was still an emotional wreck, relieved they were both safe and well and desperate for a coffee. (Tip for blokes: don’t mention this to your partner/wife after she’s spent a night in labour!) 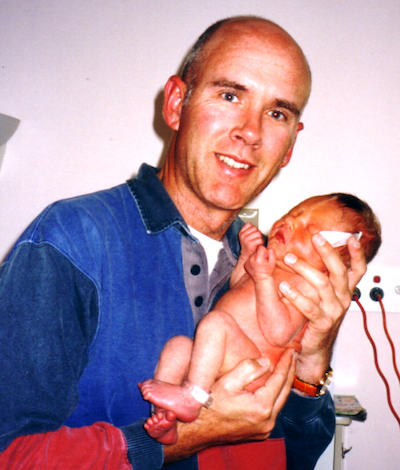 If I thought I’d been on an odyssey up to Jaiden’s birth, then I should have re-read Homer’s classic. It was only the first leg in a long journey of discovery for this new dad.

Frankly, I struggled with the “wailing bub” stage. I changed Jaiden’s nappies and bathed him. And walked and rocked him to sleep in his pram. But most times, I felt like I was playing a support role for my wife, who was breastfeeding him. Thankfully, I found my feet when he moved onto solids and became more interactive and mobile.

After Jaiden’s first birthday, my wife returned to work, and I assumed the promised house-dad role. I juggled my part-time consultancy work with entertaining a toddler, feeds and nappy changes, morning and afternoon naps, playground visits, and swimming lessons.

Jaiden did attend childcare three days a week, which gave him valuable preschool learning and social interaction with other children. It also gave me valuable (billable!) interaction with adults in an office environment. But unlike other professionals at the office, I was a nine-to-fiver because I had to drop off and collect Jaiden from childcare and cook dinner at home. 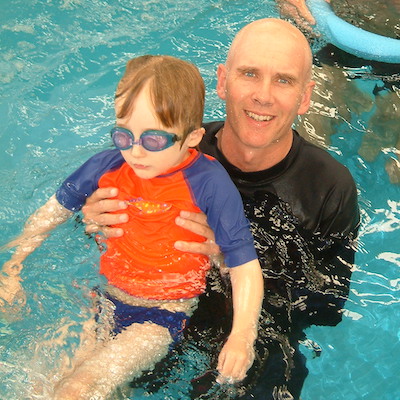 After Jaiden started school, I tried to maintain my house-dad and work balance. But by then, my consultancy work had withered. And, honestly, I was more interested in helping at Jaiden's school, on the P&C, in the canteen, and in the classroom, listening to kids read etc.

My P&C and classroom involvement lessened over time. But I still liked walking Jaiden to and from school and attending assemblies and cultural and sports events. And I enjoyed helping him with his homework, especially practising for Spelling Bees while I cooked dinner. (Spaghetti. S, P, A, G, H, E, T, T, I. Well, done, son!)

It wasn't all school and homework during these years. We did fun stuff at home and played games like hide-and-seek in the local park. There were weekends and holidays, packed full of sport and adventures. And in winter, we liked to cheer our favourite Aussie Rules football team, the Sydney Swans, onwards to victory and have kick-to-kick on the oval after the final siren.

I may have found my feet in Jaiden's early years, but in the middle years of his childhood, I was off and running and absolutely loving being a dad! 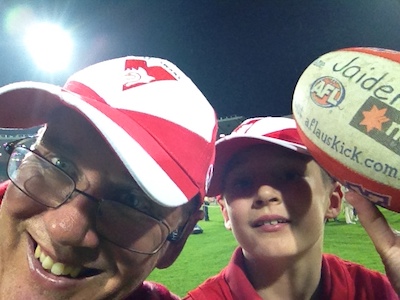 I know the teenage pushback wasn't immediate and happened over time. But looking back, it seemed like one moment Jaiden enjoyed kick-to-kick with dad. And the next, he preferred playing games on his computer.

Jaiden was suddenly taller than me, too, and had an adolescent attitude. He made his own way to school and seemed embarrassed by dad's presence at assemblies and other events. And he no longer needed my help with his homework—high school maths was beyond me, anyway! We did less and less together, and it hurt.

But I placed hope in the bond I'd built with Jaiden during his early and middle years and read a selection of good books like He'll Be OK by Celia Lashlie (Amazon affiliate link). And I recalled my teenage years and was determined he wouldn't end up as troubled and isolated as I had been.

I let Jaiden retreat into his bedroom to play computer games and (hopefully!) study. But I also coaxed him out by encouraging and facilitating his newfound love of parkour. And this gave us time to talk during our drives to the AAPES parkour gym, as he clocked up his learner-driver logbook hours.

And although I've never been an authoritarian or disciplinarian dad (except for banning hoodies in the house!), I changed the way I interacted and spoke with Jaiden. As his teenage years progressed, I had to come to terms with the looming prospect of a new adult in the family. 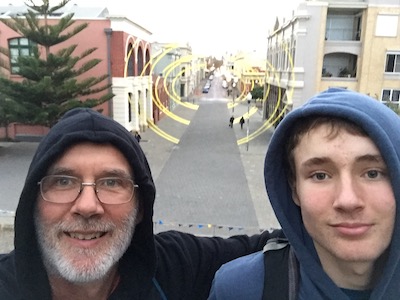 My wife and I woke early on the 2nd of June this year (2020) and festooned the kitchen and living room with happy birthday banners and number-18 helium balloons. Jaiden woke bleary-eyed as usual but smiled when he saw the decorations. And he was still smiling after he opened his cards and presents before heading off to catch the school bus as a new adult.

And yet, a couple of nights beforehand, he and I had a falling out. I'd asked how his exam revision was going. He told me it was none of my business, I got stroppy over his response, and he got stroppy with me. At some point during our heated "discussion", Jaiden snapped that I didn't understand the stress he was under. I retorted he wasn't the only one suffering stress. And then I broke down.

I am not ashamed to admit to being emotional and crying from time to time. But I hadn't sobbed uncontrollably with tears streaming down my face since ... well, since Jaiden's birth. It shocked him and me.

We both calmed down and talked things over. Jaiden's right. He is under a lot of stress, and these are his all-important final school year exams. (And during the COVID-19 pandemic!) I explained I didn't mean to carp. I was "just being a dad" and worrying about his preparation because I want him to give himself the best opportunity for the next stage of his life. We hugged, I told Jaiden I loved him, and we moved on. 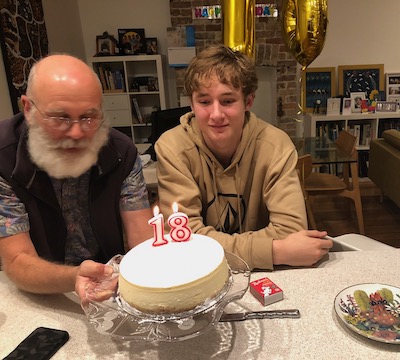 It took Homer’s Odysseus ten years to reach his destination. It’s a little over nineteen years since my wife’s surprise “baby card” in 2001. Our son is now an adult, but the journey hasn’t ended. As I've learned from my life-changing odyssey, with Jaiden’s eighteenth birthday behind us, it's time to set sail on the next leg of being a dad. (Though I’m still not happy about hoodies in the house!)

N.B. You might also like a Tall And True piece I wrote in 2018 on Sixteen Xmas Memories with Jaiden. And this recent blog post, A Birthday to Remember (or Forget?), with more being-a-dad reflections on my 58th birthday during the COVID-19 pandemic and lockdown.