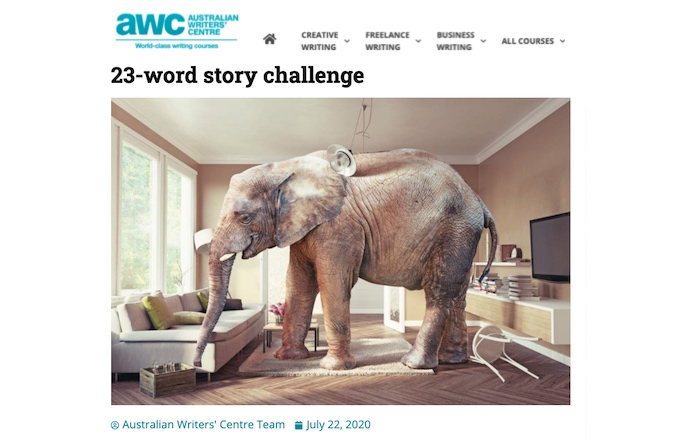 Elephant in the Room & Other 23-Word Stories

12+   The Australian Writers' Centre runs a monthly #FuriousFiction short story competition. I submitted my first entry to #FuriousFiction on the first weekend of our COVID-19 lockdown and have taken up the monthly challenge ever since. So I was interested to see a bonus 23-word fiction story challenge.

I've dabbled with microfiction, also known as flash fiction, some of which I've published on Tall And True. And I submitted an entry to an earlier 29-word challenge run by the Writers' Centre (also on Tall And True), We Need to Talk. And I've reviewed a collection of microfiction for Writing NSW, Loopholes by Susan McCreery.

Now was my chance to flex my imagination and fingers with a 23-word short story. As with #FuriousFiction, the rules were simple:

But I decided to make it a little more *challenging* for myself by setting a goal of submitting six entries, that's 2*3 23-word stories. And here they are, in no particular order:

The Elephant in the Room

They greeted each morning with silence and retreated to opposite ends of the house. Neither wanted to face the elephant in the room.

Tembo had expressed misgivings about the zoo's new elephant enclosure. But no one heeded his trumpeted warnings on the unsuitability of flatpack furniture.

Horton heard Whos hollering in the house. "HELP!" The pool was cool in the Jungle of Nool. Still, Horton sighed and charged inside.

Jumbo didn't miss the circus. Yet every so often, he liked to practise his old circus-ring tricks, like balancing on a chair. Oops!

No Pets on the Sofa

Elle's owners had hired a professional trainer to help with her separation anxiety. And Elle knew she wasn't allowed on the sofa. But ...

Perhaps, refected little Tommy, I should have checked with mum before bringing home the stray elephant I found in the street after school?

Submissions for the Writers' Centre's 23-word story challenge ran for four days and closed at midnight on Monday, 27 July 2020 (AEST). I submitted my six stories and crossed my fingers I'd have the same success as I did with my 29-word "We never talk" microfiction piece in 2019.

Wish me luck! I'll update this post if the judges publish my stories on the Writers' Centre blog.

On 30 July, the Australian Writers' Centre published a selection from almost 2000 submissions of 23-word stories on their blog — and mine wasn't among them! That said, this was my favourite "elephant in the room" story, by Mary Claffey:

In his deepest being, Johan yearned for the wide, undulating savannah. "I'm tired of working from home," he thought, wistfully.