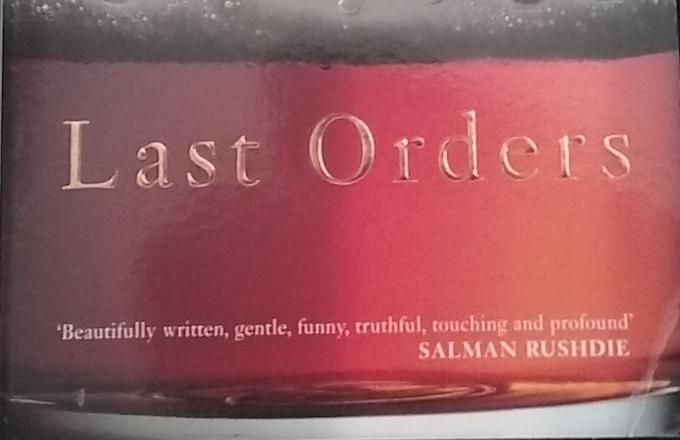 12+   From 1987 to 1995, I lived in England and, as well as loving the English countryside, the quaint villages and towns (if not the congested cities!), and the people, I loved the pubs!

Unlike Australian pubs of the day (which thankfully have since improved!), the English pubs I frequented were social meeting places, for men and women, not just somewhere for blokes to get plastered and start fights (though those pubs did exist!).

English pubs were a place to meet and have a pint or two after work, or after a walk in the countryside, or when visiting a village market, or for lunch on weekends because it was chilly outside and inside the pub felt warm and friendly.

And English pubs introduced me to Real Ales, not "warm beer", but cellar temperature and tasty, and nothing like the bland, fizzy Fosters, XXXX and Swan Lager I'd grown up drinking in Australia!

I read Graham Swift's Last Orders after I returned to Australia in the late 1990s. And it left me feeling homesick for England and English pubs.

The book opens with four men drinking in a Bermondsey pub after their friend Jack Dodd's death. Over pints and whiskeys, the men agree to carry out his last wishes, Jack's "last orders", if you like, to scatter his ashes into the sea.

It is a male-dominated tale — the principal characters are all hard-drinking men, as was Dodd. Like One Day in the Life of Ivan Denisovich by Aleksandr Solzhenitsyn, Last Orders spans a single day, the drive from the Bermondsey pub to the seaside at Margate. But each character has flashbacks along the way, recounting and reappraising their relationship with Dodd. And through this, we learn more about Dodd's friends, Dodd, and others in his life.

Swift won the 1996 Booker Prize for Last Orders. It proved to be a controversial choice, with claims Swift had plagiarised As I Lay Dying by the American author, William Faulkner. Swift himself said he "admired Faulkner", and there may have been a "little homage at work", fanning the flames of debate over the distinction between homage and plagiarism.

Sam Jordison dismissed the criticism as "Booker-bashing" in his Booker club article for The Guardian (July 2012). However, Jordinson goes on to describe Last Orders as a "fairly unassuming prize winner". His problem with the book is the vernacular, starting with the first sentence, "It aint like your regular sort of day." For Jordison, the book read "a bit cor-blimey-guvnor", as if co-written by Dick Van Dyke.

I knew nothing of the Booker-bashing controversies when I read Last Orders, and not being born within earshot of Bow Bells, the voices rang true for me. Australian author Tim Winton said of the book, "It is a deeply affecting story of unremarkable people bewildered by the plainness of death and the complexity of living."

And for me, it all started in an English pub. Cheers!

When I backpacked to England in 1987, I was in fact "going home", as I was born in England. But having grown up in Australia from the age of two, I always felt I was an Australian living in England and was treated so by my family and friends, especially whenever England and Australia played each other in cricket and rugby. Lucky for me, those were the years of Australian dominance in both sports!