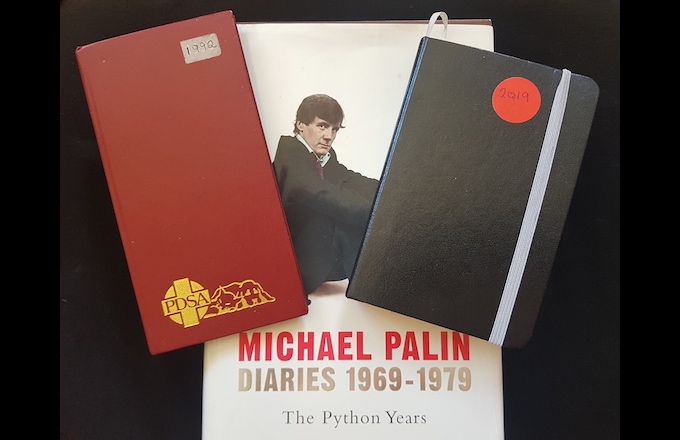 12+   I have kept a diary since I set off backpacking in March 1987. In the early years, I only recorded occasional highlights. However, as I wrote in 32 Years of Diaries (January 2018), I made a New Year's Resolution in 2005 to write up every day. Hence, a lost diary is a disaster—it's happened to me twice.

In August 1992, I was late for a job interview in London. It was a warm summer day, and I had my suit jacket draped over my arm. I favoured a slim, week-to-view pocket-diary back then, and it must have fallen out while I was dashing from the Tube to the interview. (Twin failures: I lost the diary and didn't get the job.)

Twenty-seven years later, in August 2019, I was flying back to Sydney from a weekend conference in Brisbane. The plane was packed, and I was keen to disembark as soon as it landed. Which meant I didn't follow the steward's tannoyed advice to check my seat pocket, where I'd left the diary after writing up the day.

In his Diaries 1969-1979 The Python Years, English comedian, actor, writer, traveller and former Python, Michael Palin, explains the break in his entries between August and December 1971:

The four-month gap at this point is the result of that diarist's nightmare, the loss of an almost complete notebook. According to family folklore it was dumped in the rubbish bin by my son William who, at the age of one, had developed a great interest in putting things inside other things. Whatever happened, it never reappeared. Momentarily bereft, I felt like giving up the diary altogether but the loss made me realise that it had become such a part of my life, that it was inconceivable to jettison it. If anything, I compensated by writing more.

However, I recognise Palin's pain at losing his diary and, like him, contemplated giving up in 1992. But in those pre-iGadget days, it was also my work and social calendar.

As I've learned (twice!), shops are stocking next year's diaries by August. So, back in 1992, I bought a 1993 edition and changed all its dates (thankfully, remembering 1992 was a leap year). Then I set about recreating my entries.

A kitchen wall planner came in handy for broad-brush events, but I had to rely on my memory for specifics and emotions. I only had eight months to catch up. Yet looking back through the 1992 diary, there are large gaps. Perhaps it wasn't an eventful year for me?

When I lost my 2019 diary, I didn't want to repeat the 1992 exercise of changing the dates in a 2020 edition (which, coincidentally, is also a leap year). And recalling the gaps in my 1992 diary, I decided to replace it with an A6 notepad journal instead.

Then I set about the process of recreating eight months of entries. Fortunately, in the age of Facebook and Instagram, it proved a much easier and more enjoyable task than in 1992. So, with posts and photos to jog my memory, I could relive and record entries for most days. Perhaps 2019 was also a more eventful year for me?

As Palin observed, the loss of his 1971 notebook made him realise how much keeping a diary had become "part of [his] life", and it was "inconceivable to jettison" the habit.

I feel the same about my diaries, which is why I'm grateful I recreated my lost 1992 diary and why I didn't hesitate to do so again in 2019. Even in the age of Facebook and Instagram, I still enjoy reflecting on the day and recounting my thoughts and emotions.

2020 will be my thirty-fourth year of keeping a diary. I have a few years to catch up with Palin, who has a twenty-year head start on me. Hopefully, I can follow his example of a dedicated diarist, keep up my diary writing, and not lose any more diaries.