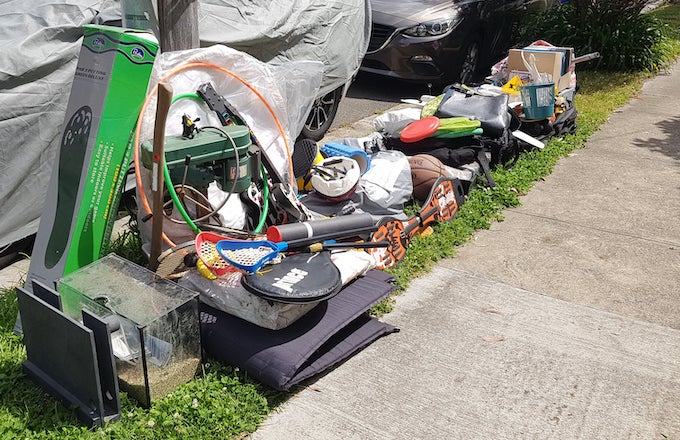 12+   One fine mid-October Sunday, I returned home from my morning walk to be greeted with the news our annual council clean-up was on Monday. After previous clean-ups, I thought we had nothing left to throw out, and I looked forward to a long day of writing. Until I had another look in the attic and shed!

Instead of writing, I spent the day clearing out a depressingly large pile of junk. And I arranged the items neatly on our verge, like a shopkeeper displaying his wares. Because I hoped someone would recycle our unwanted goods and chattels before they got crushed by a garbage truck.

My earliest experience of council clean-ups was when I moved to Sydney in the early 1980s. I lived in a shared house in Bondi, and all my bedroom furniture — desk, drawers, wardrobe, bed (but not the mattress!) — was recycled from verge side piles.

Over the years, I retained a keen interest in council clean-ups, unearthing other items of furniture and occasional treasures. I found a lamp for the desk, bookcases for my books, and a 240-CD carousel tower (now full!). And the "treasures" weren't just for my benefit. I refurbished a Fussball table for my nephew and a guitar for my niece.

And when Uncle Robert became a dad, I browsed the piles with renewed vigour for toys for my son. I found Hot Wheels cars, Transformers and Lego. His first basketball hoop was recycled from a clean-up, as were several bikes.

It seems my son inherited his father's compulsive council clean-up gene. And as he grew, so did his obsession with the verge side piles. I even nicknamed him Magpie!

The zenith of my son's "clean-up collecting" was in 2017. That weekend his haul included another desk lamp, antique maps and Japanese prints, a 1949 Singer sewing machine, and a drill press. The keen-eyed reader may have noticed it among the items I put out for this year's council clean-up. And I'm pleased to report someone recycled the drill press (again!) before the garbage truck arrived. 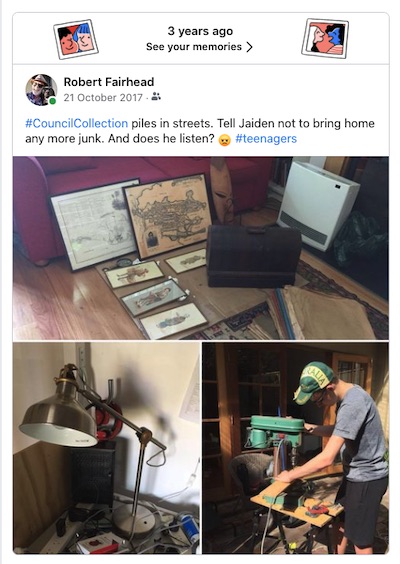 The mature, middle-aged me has become less material. And I no longer greet the annual council clean-ups with the same excitement as a kid going on a treasure hunt. Instead, as that mid-October Sunday proved, they've become a chore.

However, there is one item for which I still share my son's enthusiasm for clean-ups: books. And this year, I recycled a small selection from a cardboard box on a verge. Some of the books I've read and others I haven't. But I felt it was worth rescuing them all from the garbage truck. 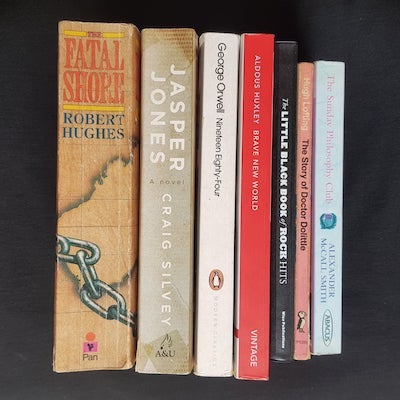 One of the books in the box was Brave New World by Aldous Huxley (which I haven't read). I later discovered someone had scribbled notes inside the book and stuck post-it notes on various pages, including this observation:

"Literature is a destabilising and subversive force."

In my opinion, it's the same with council clean-ups. Once a year, they destabilise the "new is good" creed of consumerism and subvert the ethos of conspicuous consumption.

Council clean-ups allow us to rummage and recycle, be it a bed, a Fussball table, toys, bikes, a drill press or a pile of books.