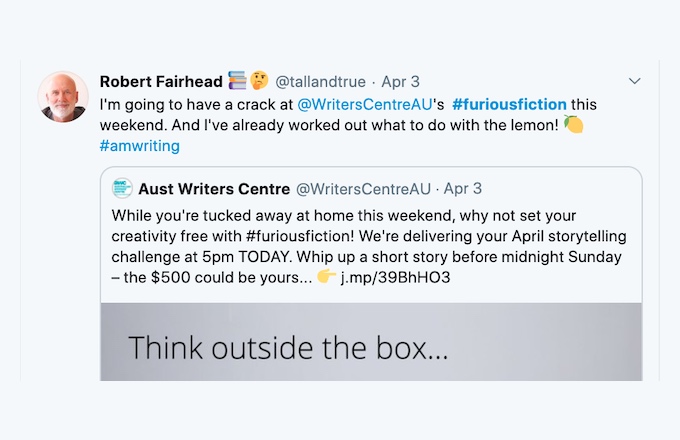 12+   #FuriousFiction is a monthly writing competition run by the Australian Writers' Centre: 55 hours to write a 500-word short story based on a brief. First prize is $500 with the winner published on the Writers' Centre website. As an added incentive, April's #FuriousFiction fell on the first weekend of the COVID-19 lockdown.

The brief for April was that the story had to begin at the side of the road. It had to include the words Apron, Pigment, Ribbon, Icon and Lemon. (The first letters of which spell?) And there had to be a splash.

I typed up the brief and stared at it on my otherwise blank computer screen. It felt like a Rorschach test, only with words instead of inkblots. But gradually, my writer's eye discerned shapes in the random pattern.

A car pulls up and parks on the side of the road, near a beach. There is the splash of waves on the shoreline. And a bottle of Tequila with a salt shaker and lemon. (Lick, sip, suck!) An apron is spread on the sand. And, of course, there's a yellow ribbon tied around an old oak tree.

A pattern was forming, but who could I weave it around? The Tie a Yellow Ribbon song suggested characters and a storyline. A recently released prisoner, I named Elliot. In my story, Elliot's been in and out of jail and is now working as a kitchen hand. (Hence the apron!) And his Tie a Yellow Ribbon love interest? Gail, whom Elliot met in rehab between stretches in jail.

As for the remaining words in April's brief, age spots mark the skin pigment of Elliot's hand. (Above the Tequila salt lick.) And he lost contact with Gail during his last stretch in jail. (As I wrote in the story, "Life stands still on the inside, but not on the outside.") Every morning Elliot checks his phone's message app icon, hoping to see an overnight response to his calls and texts.

Okay, I had to whittle it down from 540 to 500 words. But, as I've blogged before, I'm not averse to "culling my darlings". And after a hard-nosed edit, I ended up with a tighter story of 500 words exactly.

However, I still waited until I'd walked my dog and had a final editor's proofread before clicking the big red SUBMIT button on the Writers' Centre website.

Three weeks later, I received the email with April's #FuriousFiction results. I didn't win first prize, make the shortlist, nor even the long list. Of course, I was disappointed, but I'd still enjoyed writing my short story. And #FuriousFiction had been a welcome creative diversion during the first weekend of the COVID-19 lockdown.

With the competition behind me, I returned to my story and re-read it with fresh eyes. In a recent blog post on reworking a collection of longer short stories, Both Sides of the Story, I observed:

Being a good editor as a writer is important. But a key writing lesson I've learned from reworking Both Sides is to also allow yourself time. Lots of time!

By its name and nature, #FuriousFiction doesn't afford writers time to reflect on their writing. But three weeks on, I could see ways to improve my short story. So, I made the edits, respecting the 500-word limit, and shared the reworked A Song on the Radio on Tall And True.

Please have a read and let me know what you think. Although I'll be busy for the next 55 hours, as the Writers' Centre's brief for May has arrived:

Hmm, excuse me, I see a pattern here. I'm off to write more #FuriousFiction!

Somehow I wrote this blog post AND an entry for May's #FuriousFiction competition in 55 hours!

There was one hour left on the deadline clock when I clicked the big red SUBMIT button. And my mind felt ready to explode from all the creative energy flowing through it.

This month's writing was ferocious #FuriousFiction! Once again, I enjoyed the process. Hopefully, the Writers' Centre judges enjoy my short story, too.

N.B. I also missed out on the May winners' list. But you might like to read the short story I submitted, inspired by my boyhood love of Enid Blyton's adventure books and our socially isolated times, Five Meet On Zoom.