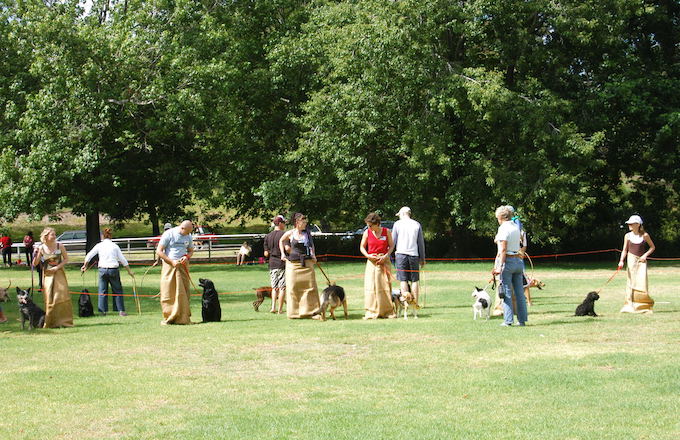 For the Sake of a Story

12+   The local dog club where I was a volunteer for twenty years ran a season-ending Fun Day with events like Fancy Dress, Agility Slalom, Waggliest Tail and other novelty races that changed from year to year. One of my favourites was the Sack Race, in which my dear old dog and I always placed third.

The rules are simple, like a schoolyard sack race, except the human competitor has to hop to the finish line with their dog on-lead beside them. Sounds easy? Try jumping about near your dog and see how excited and in your way they get!

Fortunately for me, my old black lab, Harry, was calm and biddable, so long as food or a ball were not involved — he was a disgrace in the Saveloy Relay and the Balance-a-Frisbee-on-Your-Head-and-Squeeze-a Ball-Between-Your-Legs Race! (Woof, is that my ball!?)

The weak link in the Sack Race, however, was me. Back then, I was in my mid-forties and didn't have the same spring in my hop of younger competitors. And Harry and I kept placing third.

But I didn't mind. We both had fun (at least, I did, and Harry got treats), which, after all, was the goal of the Fun Day.

One year I was in Perth visiting family and friends for a few days in the run-up to Christmas. But I'd booked a Saturday return flight to Sydney, and this made meeting up with people during the working week a little tricky.

"Why aren't you staying for the weekend?" they'd ask.

"Because I've got to get back for my dog club's Fun Day on Sunday," I'd explain. And in response to quizzical looks, I'd add, "Harry and I always come third in the Sack Race, and I don't want to miss out this year." 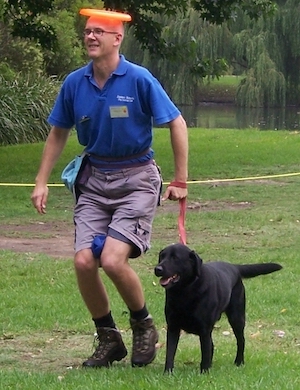 So on Sunday morning, bleary-eyed after the long Saturday evening flight from Perth to Sydney and the two-hour time difference, I headed down to the dog club with Harry for the Fun Day.

We warmed up with a well placed second in the Good-O Eating Race (splitting a pair of gobble-guts Golden Retrievers), and then I stepped into the hessian sack for our signature Sack Race. We easily won our heat and the semi-final and joined our fellow competitors on the starting line for the final.

As with any competitive sport, the mental approach to the Sack Race is as important as physical prowess! And this year, despite mild jet lag, I felt confident when the starter called, Go! And mid-way down the field, it seemed my confidence was well-founded — I was hopping strongly, and Harry and I were in the lead by two hops.

But younger competitors were gaining on us as we neared the finish line, and my legs began buckling. And with a half-dozen hops to go, it looked like Harry and I would have to settle for second.

And then I remembered the story I'd told family and friends in Perth, how we always placed third. So, I eased up and let another competitor pass us before making a final long hop and lunge to secure third place.

Like that distant dog club Sack Race, I've often made sacrifices in my writing for the sake of a story. Stephen King in On Writing: A Memoir of the Craft, urged writers:

As Ruthanne Reid expounded in a post on King's quote on The Write Practice website, How to "Kill Your Darlings" and Survive the Process:

Darlings, in writing, are those words, phrases, sentences, paragraphs, and even chapters that we are often most proud of. We love them, to the point that we almost don’t care if those bits are clear to readers or not. The problem is they can get in the [way of the] readers’ point of view.

I keep this in mind when writing, but more so when editing. It has led to heart-breaking sacrifices, but as I've learnt, "killing my darlings" is worth it for the sake of a story, article or blog post.

I knew second in the dog club Sack Race wouldn't make as good a story as coming third. And not winning didn't bother Harry because he still got treats for our third place, and we went on to compete in the Saveloy Relay, where we came last, but he ate all the saveloy-sausages.

Yes, my dear old Harry disgraced himself again. But it was worth it for the sake of a story!

N.B. You might like to read Blind Faith in a Dog, a Tall And True article on another of my dog club Fun Day favourites with old Harry, the "Ned Kelly" event.