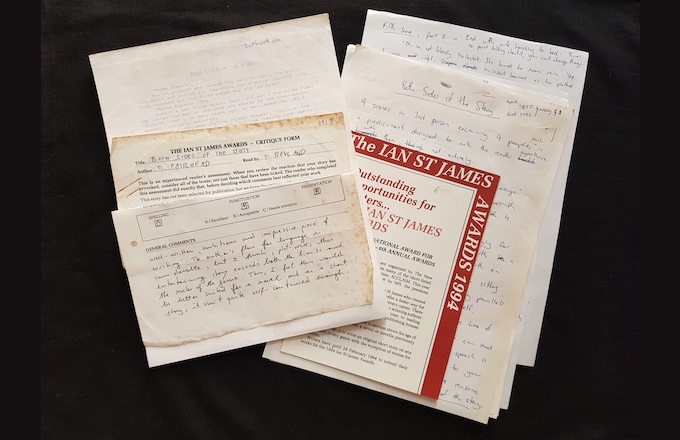 12+   My niece turned twenty-six at the end of March this year (2020). I gave her a copy of Both Sides of the Story, an ebook collection of short stories I'd recently reworked and published. The gift was special because I wrote the stories for a writing competition a month before my niece was born in 1994.

I've blogged previously on the background to Both Sides, how I revisited the original short story in November 2019 and reworked and shared it as a five-part series on Tall And True: Westminster, Bosnia, A Council Flat, The Gym and Bad News.

One of the joys of the process was realising each part stands on its own. But read as a whole (which was my intent in 1994), Both Sides still invites us to see both sides of the story. And so, in March 2020, I published it as an ebook collection.

I explained in the introduction to the ebook and the Both Sides blog post, the fifth and final part, Bad News, required more reworking than the other four parts combined. This is the piece that pulls together the other vignettes and resolves the whole short story. It was problematic in 1994, too, as I recorded in my diary back then:

Struggling with ending of story. Pivotal last scene is in danger of sounding trite.

In 1994, I didn't have spelling and grammar checking apps (like my editor and proofreader friend, Grammarly), so my writing was littered with typos and grammatical howlers. And this may explain why I got a B for Spelling, Punctuation and Presentation from the competition judge. But I also made structural changes to Bad News in the 2020 rework.

If you were to read the two pieces of writing side-by-side, you would recognise the 1994 vignette as the ancestor of the published 2020 version. Both are first-person narratives, split into two scenes, exploring a husband and wife's reaction to the TV evening news.

In the first scene, the narrator husband takes a high moral stand on the bad news items. His wife takes an opposite, open-minded view, trying to understand both sides of the story. The second occurs later that night. The husband wakes from a dream about an incident from his past. Reflecting on it causes him to question and reconsider his stand on the individuals in the evening news.

It is the reworked second scene that contains the most significant structural changes. The husband recounts a night spent with another woman while away on a business trip. In the original version, he reveals, "It was the first and only time I've ever been unfaithful to my wife." Twenty-six years on, his infidelity and admission (and others he makes) didn't feel right for the character I'd developed.

So, wielding my God-like writer's powers, I softened the incident. The husband still spends the night with another woman, but ... well, you'll have to read Bad News to find out what happens and how he reflects on it.

Similarly, the ending of the 1994 version was downbeat, with the husband waking from another dream and admitting, "It left me sad. Sad that it was only a dream." Maybe it's because I'm older now, but I'm not as keen on sad endings as I was in my younger writer days. But more importantly, again, it didn't feel right for the character or the story.

How did I change it? Well, you'll have to read Bad News to find out. But (spoiler alert), I think it's uplifting and in keeping with the intent of the short story. AND the new ending pays better homage to Phil Collins for his Both Sides of the Story musical inspiration.

As I admitted in the Both Sides blog post, I should have started working on my short story for the 1994 writing competition sooner than two weeks before the deadline. It led to a fortnight of late nights writing and weekends of editing and revising before posting my submission on the last possible day.

It also resulted in a short story with typos and grammatical errors and wasn't as well crafted and tight as I would have liked. Twenty-six years later, it took me several months to rework Both Sides for Tall And True. And even then, I made further edits before publishing it as an ebook.

In a foreword I wrote for the Mini Style Guide by Denise O'Hagan (Black Quill Press 2018), I quoted Kurt Vonnegut's advice for writers:

Being a good editor as a writer is important. But a key writing lesson I've learned from reworking Both Sides is to allow yourself time. Lots of time!