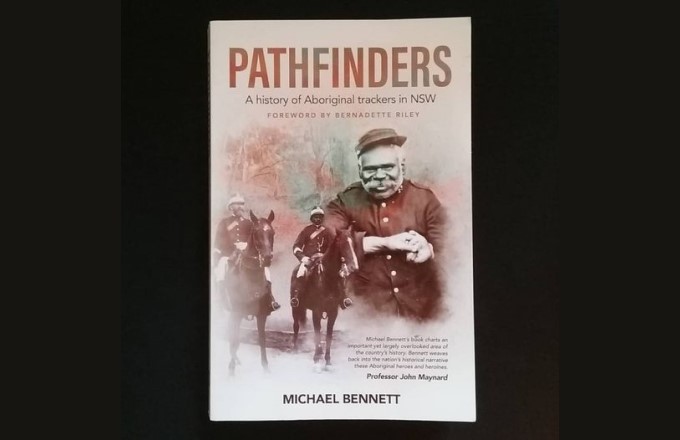 12+   I've blogged about how my son stopped reading for pleasure in his teenage years. And yet, despite his ongoing disinterest in them, he still surprises me with books for my birthday, Father's Day and Xmas. Pathfinders: A history of Aboriginal trackers in NSW by Michael Bennett is one such pleasant surprise.

When I was a teenager growing up in Perth, Western Australia, in the 1970s, schools taught little about Australia's Indigenous people, as I recounted in Reflecting on NAIDOC Week (November 2020):

We learned they had been in Australia for 20,000 years (now revised to over 60,000 years!) and were nomadic. When "Aborigines" weren't on walkabout, they sat under trees in parks and got drunk. A few became famous footballers and boxers, and Evonne Goolagong Cawley won Wimbledon. But none were ever my neighbours.

Henry Rollins observed, "A great way to learn about your country is to leave it." And this proved the case for me, as I learned more about the real history of Aboriginal Australia when I lived overseas in the 1980s and '90s than I ever did at school. It was through books I gained insight into Indigenous issues.

My travelling days are behind me, but I'm still on a long journey of learning about and understanding Aboriginal Australia. And my son has aided me on this journey with some thoughtful books. These include Deep Time Dreaming by Billy Griffiths, Dark Emu by Bruce Pascoe and Tell Me Why by Archie Roach. (Amazon affiliate links.)

When I unwrapped my son's Xmas 2020 gift, Pathfinders, I was immediately hooked by the opening lines in the Foreword by Bernadette Riley:

This book's focus is Aboriginal trackers and the tribute it pays will be legendary for anyone who reads it. It is a testament to Michael Bennett's lifelong commitment to working with Aboriginal nations across Australia, assisting us in setting the records straight, giving truthful voice to those who had none and lifting the veils on 'Terra Incognita'.

Bernadette is the great-granddaughter of Tracker Alec Riley, whose story is told in Pathfinders. Further on in the Introduction, the author Michael Bennett explains:

In this book, the history of Aboriginal trackers in NSW is told through the lives of eight men, several women, and their families and kin. Each story is unique, but certain commonalities emerge, particularly about the deep degree of skill that many trackers possessed, including their incredible powers of observation, reasoning and insight that made them vital assets for the police in NSW. 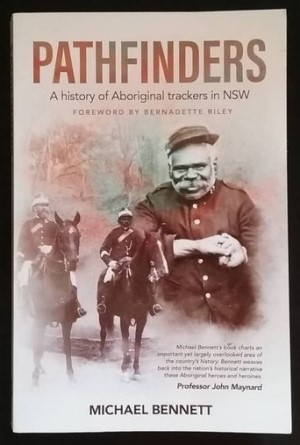 History of all Aboriginal people

What impressed me as I read Pathfinders was the depth of detail provided about the Aboriginal trackers and their families and kin. The tales of their expertise and successes are incredible, like Billy Dargin's role in tracking down the bushranger, Ben Hall, in 1865.

But so is the background into their family lives, making the trackers more than just two-dimensional characters in an adventure story. For instance, in 1938, Frank Williams moved to Bourke with his family. Evicted from their initial housing due to complaints, they lived in tents provided by the police on the fringe of Bourke. But Frank, with the financial assistance of his working teenage daughters, took the "unusual step for Aboriginal people (back then) of buying a house" in town.

As Bennett comments in the Introduction:

Trackers suffered the consequences of racist assumptions about white superiority which impeded their social and economic development. In a small way, the history of trackers in NSW and the struggles they faced to find a place in wider society is the history of all Aboriginal people. They were pathfinders in more than one sense.

In early June (2021), I attended a talk by Michael Bennett at my local library. It was a great opportunity to learn more about the research and writing of Pathfinders and Bennett's background working with Indigenous communities on native title claims.

It was also a chance to congratulate Bennett on his book. And compliment him on the detail provided about the lives of the trackers beyond their police and rescue work. Bennett's modest response echoed his Acknowledgements in Pathfinders:

First and foremost, I would like to thank all the Aboriginal families and descendants of trackers I have worked with over the past 15 years compiling the stories contained in this book. It would have been a much slimmer volume without their generous sharing of history. 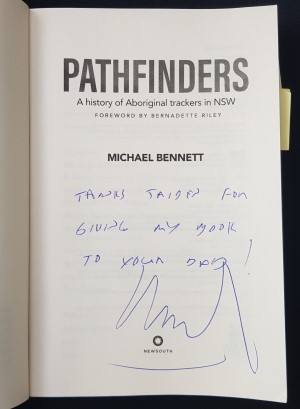 At the end of the evening talk, Bennett kindly signed my copy of Pathfinders. And I'd like to borrow his words and thank my son for giving me the book.

But most importantly, thanks to the Aboriginal families and descendants of NSW trackers, who contributed to Pathfinders and furthered my understanding of Indigenous Australia.

Addendum: In addition to the book, there is an interactive and informative eponymous website, Pathfinders NSW — A History of NSW Aboriginal Trackers. Please note the website features images of deceased Aboriginal people.

N.B. You might like to read another blog post where I write about the other Indigenous-themed books my son has given me, Deep Time Dreaming, Dark Emu and Tell Me Why, which were among my Favourite Books of 2020.