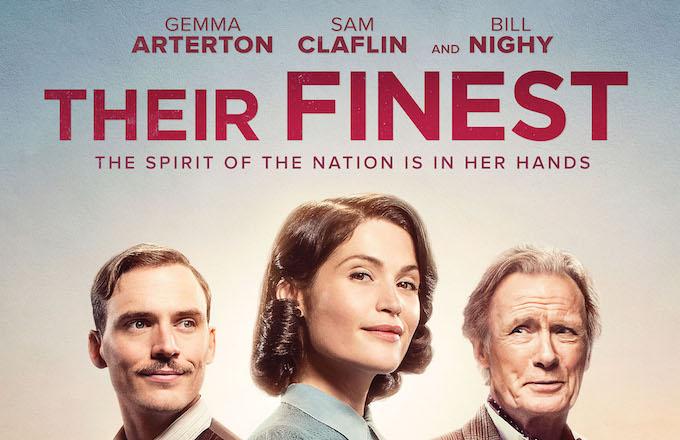 Their Finest (The Film)

12+   The other night I watched Their Finest, based on the 2009 novel Their Finest Hour and a Half by Lissa Evans. In many ways, it’s a typical British period comedy-drama about the making of a propaganda film and life on the home front during World War II. But it had an interesting and modern take on the role of women in society and their contribution to the war effort.

Catrin Cole, played by Gemma Arterton, is an inexperienced, but gifted scriptwriter who teams with Sam Claflin‘s, Tom Buckley, to write a script for a British Ministry of Information film on the Dunkirk evacuation to lift the morale of the home front during the Battle of Britain and London Blitz. The propaganda film’s reluctant star is Ambrose Hilliard, superbly played by Bill Nighy.

Mrs Cole, as Catrin is politely referred to by fellow writers and film actors and unit workers, is an instantly recognisable modern woman, with her own opinions and is not cowed by convention to keep them to herself. And when she encounters male chauvinism, such as when her husband, an out-of-work artist, insists she quits the film and London to move to the safety of Wales, Mrs Cole stands firm.

In addition to its positive portrayal of Catrin Cole and other women in the war effort, I also liked the way Their Finest shone a light on the role of writers in the making of films and the writing process. When the Ministry of Information discovers a deception in the story behind the making of their propaganda film, the head writer, Buckley, dismisses it as “artistic license”, no worse than portraying Dunkirk to the public as a heroic triumph.

There were sad moments in Their Finest, some of which felt contrived. But then it occurred to me, perhaps it wasn’t so? With blitz bombs raining down on London, life could end so suddenly and without rhyme, reason or warning. Living through the Battle of Britain and the Blitz, it must have felt at times like one’s own survival or death, and those of an acquaintance or loved one, was simply a writer’s contrivance.

I thoroughly recommend watching Their Finest … just make sure you have a box of tissues handy!