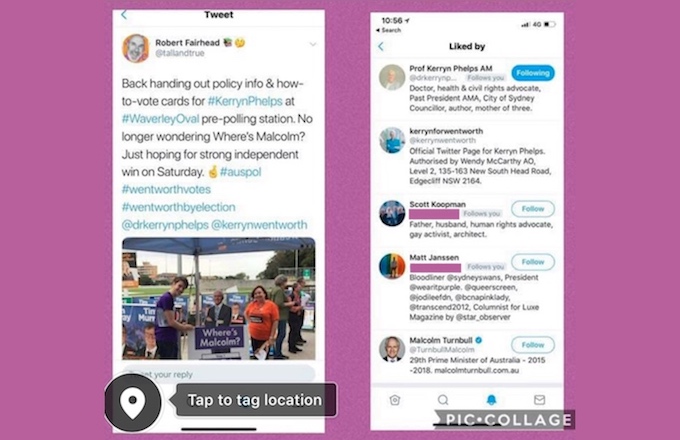 My Week in Politics

12+   Since 2007, I've sat and watched Australian politics stumble from one self-obsessed stuff-up to the next, resulting in the revolving door prime ministerships of Rudd-Gillard-Rudd and Abbott-Turnbull-Morrison, and the rise of crackpot fringe politicians. In the past week, I stood up and took action.

Like many, I had grown disillusioned with the major and minor parties and politics in general. But I was elated and energised when Dr Kerryn Phelps announced she was standing as an independent in the by-election for my Sydney Eastern Suburbs seat of Wentworth (called when our sitting MP, Malcolm Turnbull, was ousted as PM).

I was attracted to Phelps for several reasons. Firstly, she is a woman, and goodness knows we need less chest-thumping men and more women in Parliament. Secondly, Phelps' policies are broadly in line with my views. Thirdly, whenever she spoke, Phelps demonstrated she would be a strong, independent voice for the electorate and country.

And lastly, the voters in this traditionally blue-ribbon Liberal seat finally had a chance to send a message to the major parties, especially the Coalition Government, to end their self-serving squabbling. To stop lurching towards the extremes on the political spectrum. To govern for the sensible centre, where the majority of Australians philosophically sit.

And so I tweeted and retweeted about Phelps, and posted to Facebook, and commented and debated online, and discussed with family and friends about my desire to see her win Wentworth. I even donated to her campaign. But I felt I needed to do more. Which is why, in the last week before the by-election, I volunteered to hand out how-to-vote cards at pre-polling booths and at the local primary school on polling day.

I spent five long days speaking politely and smiling as I offered how-to-vote for Phelps cards, and biting my tongue and keeping the smile fixed whenever I was told to "bugger off" (or worse!). It's almost forty years since I first voted as an eighteen-year-old, and until this week, I had never played an active part in politics, other than grizzling about it on social media and marking my preferences on a ballot paper.

The family suffered a bit because I wasn't around to do my share of the household chores. And the dog suffered a lot because I work from home and he's usually curled up on the floor beside my chair when I sit at my desk. And by the end of the week, my legs and back ached from being on my feet all day (no one will ever convince me to get a "standing desk"!). But it was also an incredibly rewarding experience, with good-humoured banter between volunteers from all sides, and a chance to chat one-on-one with the candidates -- I'd only ever seen candidates speaking on TV before!

There were several highlights from my week in politics. One was when my "Where's Malcolm?" tweet was liked by the former PM and briefly trended in the #auspol Twittersphere before Turnbull realised I was a Phelps' supporter and he unliked it.

The second was on Saturday night when the ABC Election Analyst, Antony Green declared the by-election for Phelps. I was at the after-poll party with my fellow purple-shirt volunteers watching the election night special on big TV screens. There was a moment of silence, swiftly followed by exuberant cheers and applause, and tears of joy, as exhausted volunteers registered Green's call. The tears flowed for me, too.

However, the most memorable highlight was cheering our newly elected MP onto the stage and hearing her inspiring speech. There is a condition in sales and marketing psychology known as "post-purchase cognitive dissonance". You buy something, and you feel discomfort because you're unsure if you have made the right decision. After hearing her speech, I felt no cognitive dissonance with my decision to have supported and voted for Phelps!

Okay, so the vote narrowed on Sunday, with pre-polling and postal votes favouring the Liberal candidate and suggesting a possible turnaround in the result. And then the seat swung back in Phelps' favour with recounts and redistribution of preferences from several polling booths. The count has worn on during the past week, with the gap narrowing and widening from day to day and hour to hour, and as Phelps herself tweeted, it's become "a white-knuckle ride".

But I'm still hopeful of a historic victory for Kerryn Phelps in Wentworth. And I'm proud of the small role I've played in that result, by taking part in the election process with my week in politics.

Have you ever taken part in a political campaign?

Postscript: Kerryn Phelps won Wentworth and held the seat for seven months until the May 2019 general election. She proved a strong independent voice in Federal Parliament and kept her campaign promises. I rejoined Kerryn's "purple team" of volunteers and handed out how-to-votes for her re-election for three weeks at pre-poll booths and at the local school on election day. There tears at her concession speech, but also great pride. Although Kerryn had lost Wentworth, she and we, her purple team, had made a difference. 💜