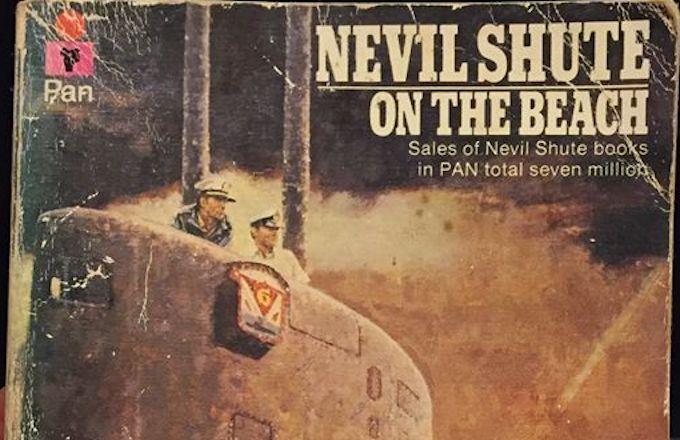 12+   I commented on Facebook recently (5th September 2017) that with all the bleak news on North Korea and brinksmanship by Donald Trump and Kim Jong-un, I thought I'd dust off and re-read my old second-hand bookshop copy of Nevil Shute's On the Beach ... to prepare for the worst, just in case!

For those unfamiliar with the novel, it was published in 1957 and is set in a post-apocalyptic world, where the radioactive cloud from a northern hemisphere nuclear war is spreading gradually and inexorably southwards towards the beaches of Australia and beyond.

I recall the story being powerful and unrelenting. And to my mind, the novel contains a salutary message for today's world leaders — if only they can drag themselves away from social media to read it!

Shortly after my Facebook post, a comment was posted by Richard Thorn, author of Shute - The engineer who became a prince of storytellers (Amazon affiliate link):

"While On the Beach was probably the most well known of Nevil Shute's novels, many of his books are worth revisiting. My recently published biography examines the life and work of this much-underrated engineer and novelist."

Intrigued, I had a look at the PDF Sample of the biography on Richard Thorn's website. I found it fascinating. Nevil Shute was a nom de plume for Nevil Shute Norway, born in Middlesex, England, on 17 January 1899. His (handy) middle name came from his paternal grandmother Georgina Shute, who was also, aptly, a prolific author in her day!

Before his career as an author, Nevil Shute Norway was an aeronautical engineer and a pilot. He helped develop airships, working as a stress engineer on an airship project for a Vickers Ltd subsidiary.

By the outbreak of the Second World War, Nevil Shute was a rising novelist. However, he continued his engineering career, contributing to the war effort. And the British Ministry of Information cached in on his celebrity as a writer to send him to the Normandy Landings and Burma as a correspondent.

After the Second World War, Shute flew his own light aeroplane to Australia and back and on his return home, he decided that he and his family would emigrate to Australia.  This led to a series of books set in Australia, A Town Like Alice (1950), Round the Bend (1951), The Far Country (1952), In the Wet (1953), Beyond the Black Stump (1956) and On the Beach (1957) among them. By now, Shute was one of the world's best-selling novelists.

But as Thorn points out in his biography, "There was more to Nevil Shute than his books, a great deal more." And to think I wouldn't have known this without Donald Trump and Kim Jong-un scaring me to revisit my old secondhand copy of On The Beach!