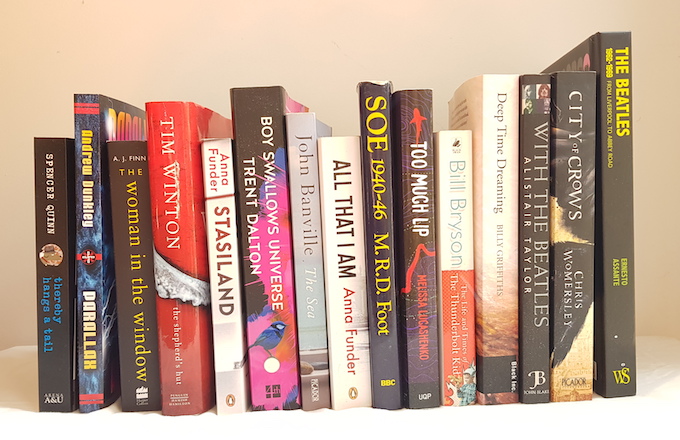 12+   In December 2018, I blogged about the sixteen books I'd read or dipped into during that year in My Year of Books. I'm a bedtime reader and often doze off with a book on my nose. And this is why I'm happy to report there were another sixteen fiction and nonfiction titles in my bedside books for 2019.

In the 2018 post, I listed all the books I'd read with extracts from reviews I'd published on Tall And True or comments I'd shared about them on social media. And I'm going to do similar this year, but only for my five favourites from 2019. It wasn't easy to narrow down the list to five, but hopefully, this will give me more time for writing and reading.

Note: One of the titles below is missing from my 2019 bedside bookshelf photo because I've loaned it to a friend.

Also, click on a cover photo to learn more about a book or buy it on Amazon.com.au — doing so helps support Tall And True.

All That I Am by Anna Funder

Published in 2012 and depicting events that led to fascism and world war seventy years ago, the resonance of All That I Am for today's political climate is disturbing. We should learn from Anna Funder's Miles Franklin Award-winning account of the lurch to populism and nationalism and the disastrous consequences of appeasement. And it has one of the best first sentences I've ever read: When Hitler came to power I was in the bath. 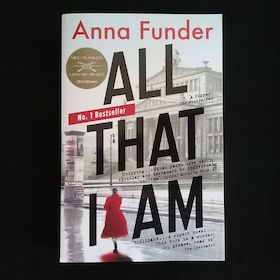 Beneath the Willow by Michael J Murphy

Beneath the Willow opens with a prologue set in rural NSW in 1953. It is a dark scene of fear and domestic violence. The novel then steps back in time and place to the working-class suburb of Balmain in 1915. Australia is at war in foreign lands, and sons of families have answered her call to arms. Michael J Murphy had me invested emotionally in the lives of his characters and hopeful for their future. His is an outstanding debut novel and one which I highly recommend. 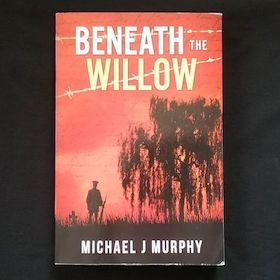 The hoopla surrounding this book after its publication in June 2018 was phenomenal. Set in mid-1980s Brisbane, it's the tale of two brothers, a lost father, a junkie mother, heroin dealers, murderers and an ex-crim babysitter whose jailbreaks earned him the nickname Houdini of Boggo Road. But what makes this book a little uncomfortable is how Trent Dalton based it on aspects of his life. Like the young protagonist, Eli Bell, his parents were heroin addicts and dealers in Brisbane in the 1980s. 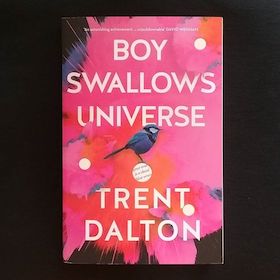 The Shepherd's Hut by Tim Winton

My first Tim Winton was Cloudstreet, bought in 1992 shortly after he'd won a second Miles Franklin Award. I've since added ten more Wintons to my bookcase. I enjoyed reading each book, but, for me, none had the wow impact of Cloudstreet. When I finished reading the last sentence of The Shepherd's Hut, I exhaled the breath I'd held for the final paragraph and exclaimed, Wow! 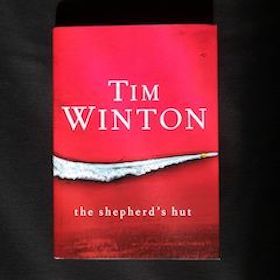 Award-winning Australian author Anna Funder discussed her 2003 bestseller Stasiland on the Better Reading podcast in February 2019. Having visited Berlin in 1987 and 1995, her book on the East German secret police and the lives of East Berliners and East Germans before and after the Wall piqued my interest. And the book lived up to its cover blurb: "Stasiland is a brilliant, timeless portrait of a Kafkaesque world, as gripping as any thriller." 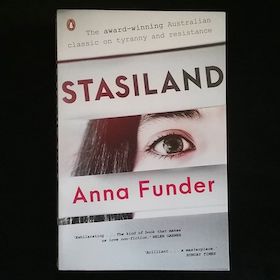 Is there a number one among my favourites for 2019? Well, yes, but it's from outside the five listed above. And it's a favourite not because of the book itself (although I loved reading it), but for its inscription:

You can never have too many Beatles books — and I have a good collection. This latest addition to my library was a parting gift from a young guy who I'd helped learn to drive and clock up his learner-log book hours and to whom I mentioned my love of the Beatles. Inside the cover, he'd written: "Thank you for your time, patience and good chats. It's been a pleasure learning to drive with you." 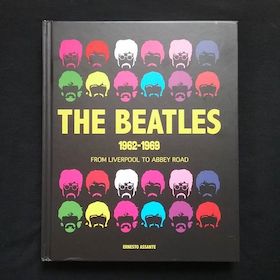 Books bring so much joy to my life. I love reading and reviewing them, I love giving them as gifts, and I love receiving them, especially when they come with a message of thanks.

One month into the new year, my pile of unread bedside books is already growing. Perhaps I need to go to bed earlier, so I can stop dozing off mid-chapter and read more books in 2020?

NB. You might like to read other reviews of books I've written and shared on Tall And True over the years.