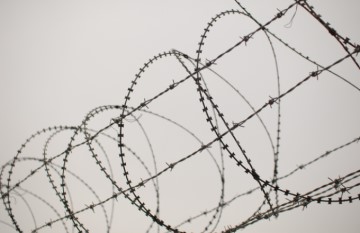 12+   The queue for visas at the border was not orderly. Just a desperate mob of refugees, clawing at the razor wire-topped fencing, pleading with armed guards to be let through the padlocked gates. The smuggler had warned the group this would be the case and showed them the alternative on his map.

"You can cross the border here," he indicated a point on a winding line on the map. "It is a river, but hasn't flowed since the Climate Catastrophe."

"However," he cautioned, "the banks are steep, and you will need a rope to drop down onto the dry river bed. Stay low, keep quiet, and cross only at night, when the moon is below the horizon or hidden behind a cloud."

He ran his finger along the line to a bend. "One of you will need to climb the far bank here and tie the rope for the others. If you evade the border patrols, run into the hills and hide for two nights."

The smuggler moved his finger a short distance to a straighter line. "On the third night, follow this old highway to the city. You will find fellow refugees in ghettos on the outskirts."

He folded the map and addressed the group. "Now, pay my fee, and I will give you a copy of this map. It’s your only chance."

Most in the group offered the smuggler e-credits for payment. Some rummaged through their meagre belongings for worn banknotes. And one couple shuffled away, unable to afford the smuggler's fee.

In years past, none of the group had dreamed of becoming a refugee. But the Climate Catastrophe and Climate Wars had led to the Third Great Depression. There was no work, little food in the shops, and armed gangs roamed and ruled the streets, defying government crackdowns and curfews. And as happened during the COVID Crisis, countries and states turned isolationist and shut their borders.

But rumours filtered back from refugees who had fled earlier that life was better on the other side of the border. And so the group had left their homes and followed a well-worn path to the smuggler.

"Here's your map," he said, pocketing his fee and handing over a faint photocopy. "Memorise the details, and then burn the map. If the patrols find it on you," he told the group, "this route will be closed forever."

The smuggler disappeared into the mob of refugees queuing for visas to seek new customers. The group passed around the map, committing it to memory before burning it as instructed.

There was a sudden commotion among the refugees. One of them had scaled the fence and was trying to climb over the razor wire. Others started to follow. The guards fired warning shots, and then they lowered their rifles. There was screaming, and the group turned and ran with the refugees away from the gunfire.

No one paused to admire the bullet-pockmarked sign spanning the road near the border gates: “Welcome to the Lucky Country”.

With thanks to Grey Yoon from Pixabay for the image of the razor-wire fence.

I didn't win or make the short or long lists for Furious Fiction April. But it's interesting to read the winning and shortlisted entries on the Writers' Centre website and see how different writers approached the QUEUE.

There was a store checkout, a funeral motorcade, a troupe of dwarves on a mountain pass, a trail of black ants, dancers queuing backstage, and a queue of tourists outside St Paul’s Cathedral.

I set my QUEUE at a border crossing. It is a time in the future after the Climate Catastrophe and Climate Wars and during the Third Great Depression. And refugees plead in vain with armed guards to be let through the gates.

A smuggler offers a group of refugees a MAP with an alternative route to CROSS the border using ROPE to climb down onto and up from a dry river bed.

As for the last word in the brief, no one ever dreams of becoming a refugee, especially in the LUCKY Country, Australia.

You might also like to read another of my recent Furious Fiction short stories, Memories and Marshmallows.