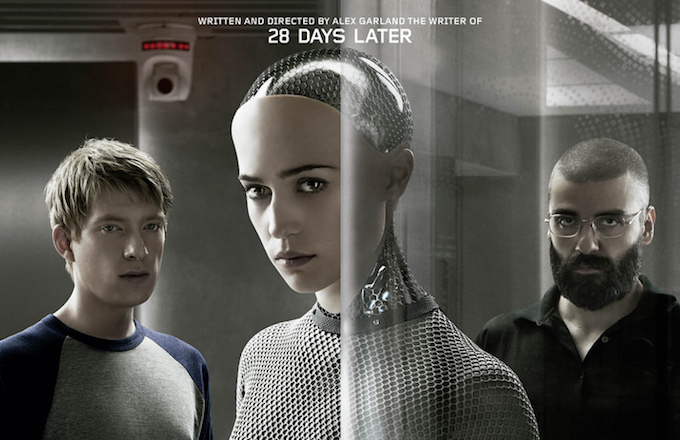 18+   Over the summer holidays, I caught an ABC Science Show podcast, The Year in Tech. Science reporter, Ariel Bogle, discussed with her editor, Jonathan Webb, tech stories which had caught her eye in 2017. She opened with an audio clip from the Ex Machina movie that instantly spiked my interest:

In the podcast, science reporter Bogle explained she didn't play the Ex Machina audio clip to talk about "fembots". Instead, "I wanted to play it because it's such a good movie. I wanted to remind everybody to go watch it if they haven't already."

And Bogle wanted to contrast the artificial intelligence (A.I.) of the fembot, Ava, in the movie with a 2017 article about "the algorithms and machine learning technology that might impact our daily lives". (Can A.I. Be Taught to Explain Itself?, New York Times, November 2017.)

I paused the podcast and Googled the Ex Machina clip on YouTube. It was every bit as eerie visually as it was to listen to on the podcast. I had to watch the movie!

Caleb Smith, a programmer at a Googlesque internet search giant, wins a competition to spend a week with the company CEO, Nathan Bateman, at his mountain estate. As Caleb flies in the helicopter to meet Bateman, he asks the pilot, "How long until we get to his estate?" The pilot chuckles and replies, "We've been flying over his estate for the past two hours." 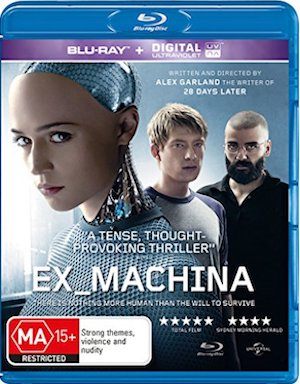 Caleb learns Bateman wants him to be the "human component" in a Turing test, a "test of a machine's ability to exhibit intelligent behaviour equivalent to, or indistinguishable from, that of a human". The "machine" is one of Bateman's latest experiments in A.I., Ava.

"Ava is a breathtaking A.I. whose emotional intelligence proves more sophisticated — and more deceptive — than the two men could have imagined."

Bateman wants Caleb to decide not only if Ava can "explain" herself, but whether her behaviour is indistinguishable from a human. He monitors Caleb's every interaction with Ava via CCTV. And is especially keen to know if Caleb feels "attraction" towards Ava.

It's not much of a spoiler to reveal Bateman proves to be a less than likeable character. Hardly surprising for a technology mogul whose empire is built on understanding and manipulating the use of the internet (with apologies to Google and Facebook CEOs). And whose estate you can fly over for two hours in a helicopter!

Ex Machina could be set in the not too distant future or now. It's a movie about advanced A.I. and Ava's awakening. I think it's also a movie about the unbridled power of technology. And the wisdom of allowing this power to be concentrated in the hands of a single person or corporation!

Ex Machina follows the tradition of sci-fi movies with "sexy female robots" (The Guardian, January 2015). And the role Bateman's A.I. "experiments" play in his life also raises the contemporary issue of using fembots for home help and "companionship". Is it morally right to treat "female humanoid" robots as servants and sexual slaves? Doesn't this reflect and normalise a male-centric and chauvinist view of women in the world?

I have always liked science fiction that challenges me on several planes. So thanks, ABC Science Show and Ariel Bogle for your tip. Ex Machina is a movie I enjoyed and one that made me think!

N.B. You might also like to read another of my film reviews Tall And True, Three Summers by Ben Elton.