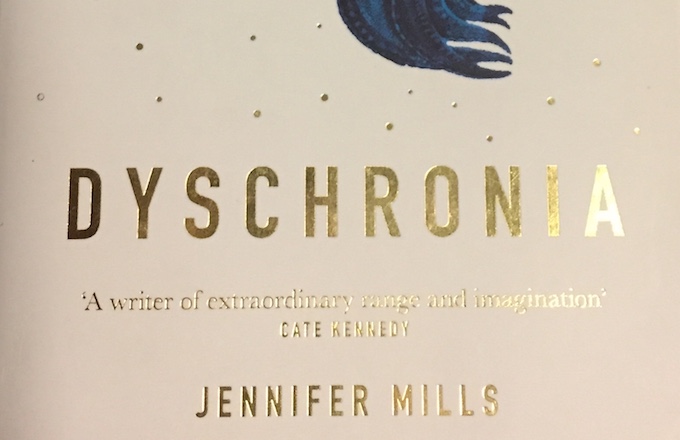 18+   Jennifer Mills sets her novel, Dyschronia, in the run-down coastal town of Clapstone. Sam is twenty-five, and the townsfolk view her as their oracle and depend upon her visions to bankroll their survival.

And yet a great catastrophe has occurred, far worse than any in the past (and there have been many disasters and misfortunes): the sea has disappeared, seemingly taking with it Clapstone's last hope for renewal as a seaside theme park destination.

The novel then shifts swiftly back in time. Sam is school-aged, living with her hard-working single mother, Ivy, when she suffers her first migraine. Through blinding pain and nausea, Sam has a vision: "It's now but it's a memory. Or like a memory, blurred at the edges. Or like a dream, but present to her."

Ivy is sceptical of her daughter's migraine-primed prescience. Even when Sam's first "dream" plays out as predicted, her mother dismisses the coincidence: "It's called déjà vu. It feels like magic but it's just the brain playing tricks."

Sam's migraines continue, and her visions are increasing vivid. Ivy seeks medical help, warning her daughter, "Don't tell them anything weird. I'm not having them set Family Services on us." But an army of doctors and specialists find nothing abnormal with Sam's brain. There are further tests and second opinions.

Then one day, Sam sees an email sent to her mother containing a PDF attachment with the intriguing title, "Dyschronia". Sam opens the attachment and reads the subheading— "Idiopathic perception disorders and temporal dissociation of childhood". She reads further: "It may be contended, that pain and the perception of time have created a dissociative loop, a splitting: migraine as a self-fulfilling prophecy."

Mills' Dyschronia takes the reader on a non-linear journey through Sam and Clapstone's present, past and future. It is a journey of time and perception—of hopes and disappointments. It is a sensory one, too: from the foul taste and smell of Sam's nausea-inducing migraines and the lingering tang of the town's abandoned asphalt plant to the "baroque" stench of the dead and decomposing creatures of Clapstone's lost sea.

Mills skillfully crafts her principal characters in third-person: Sam and Ivy; Ed, a big ideas man who moves in with Ivy and convinces the town to leverage Sam's visions; and Ned, Ed's awkward teenage son and unlikely business partner.

But Mills switches to ‘collective first-person' to tell Clapstone's side of the story. It cleverly underscores how the town's remaining residents have come to think and act as a single, interdependent entity: "We had dreams for Clapstone", "We are decent people", "Why didn't Sam tell us?"

Did Sam know the sea would disappear? Is she an oracle or a liar? Are the town's health and economic woes due to industrial pollution? Has climate change caused the sea and sea life to disappear? Is it just "bad luck", or is it déjà vu? And can Sam close the loop of her visions and save Clapstone?

You will have to read Dyschronia to learn the answers to these questions. Jennifer Mills's imaginative and beautiful writing will be your reward for doing so.

This book review was originally published by Writing NSW in May 2018 . I also wrote a blog post on Tall And True about the review writing process for Dyschronia, titled An Editor's Magic Touch.