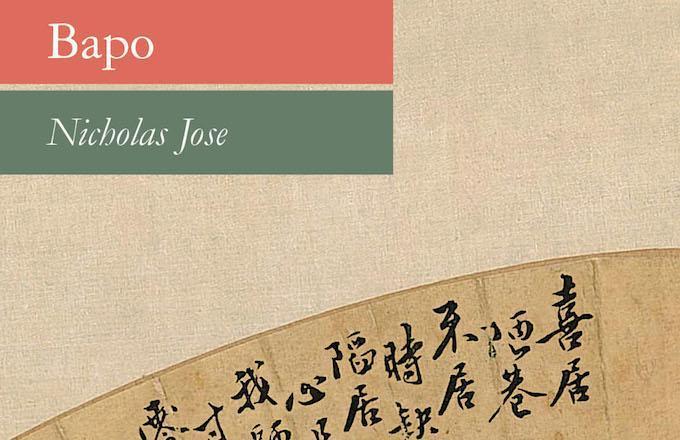 18+   The cover of Nicholas Jose’s Bapo, a 19th-century hand-fan decorated with Chinese characters and a collage of contrasting patterns, catches the eye. It invites the reader to open the book, learn about its author and title, and delve into his short story collection.

Jose is a novelist and essayist. He was general editor of the Macquarie PEN Anthology of Australian Literature and is Professor of Creative Writing at Adelaide University. His association with China dates to the early 1980s when he decided to learn Mandarin. As he confided on ABC Radio National’s Books and Arts show in October 2014, ‘something in my bones told me China would be important to Australia.’

Jose first visited China in 1983, taught in Shanghai and Beijing from 1986 to 1987, and was Cultural Counsellor at the Australian Embassy in Beijing from 1987 to 1990. As he explained, ‘China becomes a big part of your life when you get involved with it. It becomes almost like a partner. It becomes ever present.’

In his latest collection of short stories influenced by China, Jose defines bapo as a form of Chinese painting, where the artist tricks the observer into seeing a ‘collage of fragments’. The word literally means ‘eight broken’, from ba, the number eight and a lucky number in Chinese culture, and po, which means broken. Thus bapo suggests ‘broken luck’, though it can also suggest ‘a luck in simply surviving, less glorious maybe, but not so bad in the long run.’

Jose explores both meanings as metaphors in Bapo, presenting a collage of disparate stories that offer insight into China. Through reflection, he reveals how the lives of his characters – Chinese and Australian, artists, diplomats, entrepreneurs, expatriates and immigrants – have been challenged and changed since the 1980s.

The book is divided into two parts. Part 1 opens with strong Chinese subjects and engaging characters, though drifting into sexual power-play themes towards the middle of the book may not suit all readers. In Part 2, the storylines shift from China, giving the book a disjointed feel, yet it ends with the delightful tale of a Chinese immigrant girl who becomes a local legend.

Reading Bapo leaves one with an appreciation of how an ever-present relationship with China develops and takes hold. I closed the book inspired to learn more about this fascinating country of growing importance to Australia and the wider world.

This review was published by Writing NSW in June 2015. I enjoyed writing in part because at the time I was studying Mandarin to help my son with his language studies at school and it gave me some insight into Chinese culture ... from an expat's point of view.