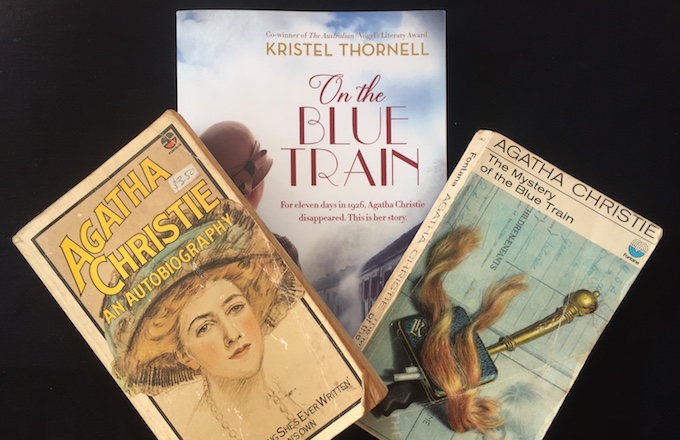 12+   First a disclosure: I have never read an Agatha Christie novel. But my wife loves her books, especially the Hercule Poirot mysteries, and our bookcase at home is full of classic Pan and Fontana paperback "Agathas".

And black and white Miss Marple movies starring Margaret Rutherford were a big part of my wet weekends' TV as a kid. And I attended The Mousetrap at St Martin's Theatre on a visit to London in the 1990s. Though, as you will know if you have seen the play, the audience is sworn to secrecy, which means I can't reveal anything about the performance or "whodunnit".

So when Writing NSW asked if I would like to review On the Blue Train by Kristel Thornell, a novelisation of the eleven day-period when Christie disappeared in 1926, I thought it would be an interesting assignment and a chance to learn more about this famous author. And to finally read one of her books. 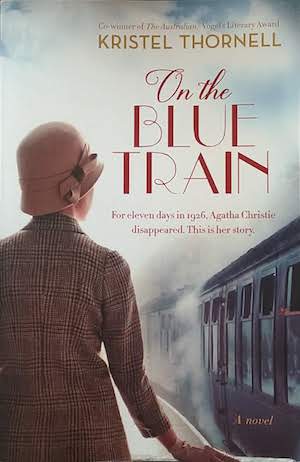 At the moment I'm two-thirds of the way through Thornell's novel, and apart from making a few mental notes, I haven't started the review. So like The Mousetrap, at this stage, I can't reveal much about On the Blue Train, whodunnit or, more to the point, "whyshedunnit".

However, I can make a few preliminary observations (and will later update this piece with a link to the full review). For instance, when I started the novel, I found the writing and characters felt a little "stiff and formal". I reasoned Thornell's narrative style was a deliberate choice to reflect the times and class of Christie and her companions, or maybe it was a homage to Christie's style of writing.

The Mystery of the Blue Train

And so I put On the Blue Train to one side and started reading The Mystery of the Blue Train (1928), the novel Christie was working on when she disappeared. Christie struggled to write this book, both before her disappearance and afterwards. In her self-titled autobiography (Collins 1977), she lamented:

"I have always hated The Mystery of the Blue Train, but I got it written, and sent off to the publishers. It sold just as well as my last book had done. So I had to content myself with that — though I cannot say I have ever been proud of it."

Christie populates her "hated" with stereotypical well-bred and well-heeled protagonists, who sometimes pay thugs to do their dirty deeds and other times do the thuggish-deeds themselves. And of course, the well-mannered and moustachioed Monsieur Hercule Poirot who solves the mystery of whodunnit! Yes, the language can be pompous, but in my reading of it, this book wasn't the inspiration for Thornell's narrative style.

Before returning to On the Blue Train, I made another detour and read chapters from Agatha Christie: An Autobiography (1977) covering the dates leading to her disappearance and the repercussions. Interestingly, Christie opens that chapter of her life with a blunt admission:

It was a "blue year" for Christie. Her beloved mother falls ill and dies, and she struggles with clearing up her mother's house — the family home, 'Ashfield' in Torquay — and with writing her "hated" book. Christie's health suffers from "unhappiness, worry and overwork", and then her husband, Archie, visits 'Ashfield' and declares he has fallen in love with another woman and wants a divorce "as soon as it can be arranged".

There is no mention of those eleven days in December 1926 when it seems Christie may have suffered a nervous breakdown and "disappeared", booking herself into a spa-hotel in Harrogate, Yorkshire, under an assumed name and persona. She concludes the chapter in her autobiography with characteristic bluntness:

"After illness, came sorrow, despair and heartbreak. There is no need to dwell on it. I stood out for a year, hoping [Archie] would change. But he did not. So ended my first married life."

On the Blue Train

I am now back reading Thornell's On the Blue Train, I have settled into the narrative style, and I am enjoying it. On my bookmarked page, Christie has been missing for ten days. There is a public outcry over her disappearance. Many fear she may have committed suicide. A thousand police officers and 15,000 volunteers have scoured the rural landscape. And she has featured on the front pages of British and American newspapers. Meanwhile, idle-life carries on at the Harrogate spa-hotel, seemingly oblivious to the outside world.

Because she never addressed this mysterious episode in her life, it has been left to the curious and novelists like Thornell to blend fact and fiction and provide an explanation as to what drove Christie to stage her disappearance and how she spent her days in seclusion at Harrogate. The former may seem obvious even to an amateur psychologist, but the latter is the realm of the novelist.

I look forward to finishing On the Blue Train and to writing my review!

Update: And here it is, my review of On the Blue Train by Kristel Thornell -- hope you enjoy it, I did!