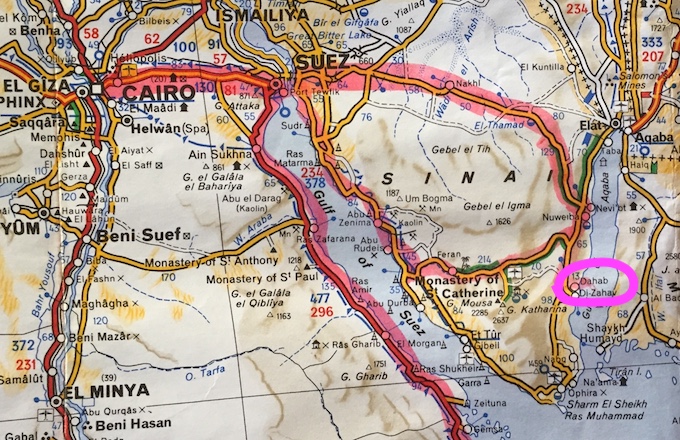 The Turbo Cat ferry from Aqaba in Jordan to Nuweiba in Egypt felt and sounded like we were on a jet plane. It even had onboard video, though the hour and a half crossing wasn't quite long enough to get to the end of the film! After prolonged passport and customs formalities in the terminal (with our passports checked four times!), we haggled with a mob of taxi drivers for a shared fare to Dahab. Found one who agreed to US$3 per person for the four of us for the 65 km drive south.

Based on feedback from other backpackers, I had steeled myself for changes to Dahab. But it was a shock when we drove into what I had once described as a village and what now looked like a tourist trap town! There was no middle eastern identity about the tie-dyed shirts and skirts and tacky souvenir shops and sprawling restaurants and campsites. Even the curve of beach I had laid on five years ago was concreted over with wall-to-wall restaurants. And there wasn't a local dwelling in sight!

Checked into the Muhammad Ali campground, just off the beach, with spartan "cells" for rooms, similar to what I stayed in at the Crazy House. Sand coated everything in our room, and the bedsheets, rugs and mattress all needed a good shake — even then, we used our sleeping bag sheets and our tent fly as a mattress cover. Strong gusts of wind helped make the room less stuffy. Having tidied up our "cell", it was pleasant to lay on the bed and listen to the waves rolling onto the beach. At least that part of Dahab hadn't changed.

Had reunion dinner with friends from Jordan at the Blue Hole restaurant and were joined by T., an American we had met at the campground. The "boys" ducked off to the beach to buy beers for dinner. Passed many other restaurants with loud music blaring and touts who tried to lure us inside OR offer us drugs. Relieved to get back to the more sedate Blue Hole, where we could chat and enjoy the sound of the waves lapping on the shore.

Past midnight when we got back to Muhammad Ali. It had been a long day, but our windowless cell was too stuffy to sleep in with the door closed, so we propped it open and hung a sandy sheet across the doorway to let the breeze billow in. Heading to the toilet block, I saw why campground mattresses and bedsheets are so filthy. Backpackers had thrown them on the ground to escape the stuffiness of the back row of cells. Thanks to our open door and sheet, we stayed cool and slept well, lulled by the sound of wind and waves.

The wind was stronger than yesterday, with whitecaps all across the bay. Not promising snorkelling conditions, so we found a pleasant cafe on the beach with good çay and sheltered from the wind to camp for the day. Soon joined by Jordan crew. We chatted and played backgammon and ate and drank until the wind died down, and then we took turns minding each other's gear while we went snorkelling.

The reef was every bit as good as I remembered it from 1991, and I was pleased C. would finally get to see what I had been raving about for years. I thought the variety of fish and coral, their colour, size and shape, was better than at Aqaba. But K. had heard nearby Blue Hole reef was even better than Dahab — excursion planned for tomorrow.

In the early evening, we walked to Dahab "city" to change money. Outskirts of the Bedouin tourist village strewn with rubbish, far worse than I recalled from five years ago — it looked like we were walking through a tip. Changed our money and decided to take a taxi back to the campground. Some sights you don't need to walk past twice!

Good way to start the day at beach cafe with a brisk dip in the sea from the cafe steps followed by Cornflakes and fruit salad. Jordan crew and T. joined us for breakfast, and we haggled with tourist touts offering to drive us to Blue Hole reef. Amused by one's promise, he wouldn't take us to the "wrong" Blue Hole.

In the end, we chose the Muhammad Ali campground option. However, we ended up with a madman for a driver in a pick-up truck with spongy brakes. B. sitting up front was ready to brain the driver, especially when he tried to drag off another pick-up on a narrow stretch of beach. The rest of us holding on for our lives in the back weren't best pleased, either, and C. thumped on the roof to get the driver to slow down.

Passed what we thought had to be the Blue Hole, a pale aquamarine circle in the reef, but it proved to be the "wrong" one. Our driver parked, and we had a 500-metre walk to the real hole, a deep blue break in the reef shelf right on the shoreline.

K's hearsay on the Blue Hole was right: the reef was better than at Dahab. The fish and coral were spectacular! And once in the water, the reason for the deep blue colour of the hole was obvious, with the sheer sides of the reef falling away 60 or so metres. Guidebooks warn scuba diving is dangerous at the Blue Hole, and the plaques on the cliff face bore witness to the fact.

But snorkelling felt safe and like being in a tropical aquarium or being part of a 4D Magic Eye print. Enjoyed watching the tiny fish as much as the larger ones and got real buzz listening to a big, paisley coloured fish chewing on the reef. Little fish even nibbled me — it was a strange experience being fish food!

Spent long intervals diving, with our skin going goose-pimply and fingers wrinkly. We spent more time out of the water, warming up and drinking çay. It was a balancing act because, although the water was chilly, the sun was scorching. We even had to wear our shirts when snorkelling to stop getting sunburnt.

Eventually, had enough of diving, sunning and drinking çay (and of little kids hawking cotton bracelets for Baksheesh) and returned to Dahab. I was elected to sit up the front with the driver as a "calming influence". Though he continued to mutter madly, his driving was more sensible. I spent most of the time politely rebuffing attempts to increase our agreed price.

Back in Dahab, the "boys" went for a beer while the "girls" showered and changed. I wished time would stand still as we sprawled across a Bedouin terrace on sunset, supping our beers and staring across the sea to Saudi Arabia. I wondered if someone was doing the same over there — only, supping çay instead of beer.

We tried a new restaurant for farewell dinner of the "Dahab Dive Team" (Jordan crew and T.). Three of us chose a simpler fare while the other two couples went all out with calamari and whole fish. They got three times the quantity of food for three times the price. It seemed fair, but goodness knows how they managed to eat it all. After dinner, handed B. his birthday present from the team, a Red Sea fish guide — would have been handy at Blue Hole.

Chatted back at the campground with K. and D. until it was time for them to head to Cairo. They intend staying at the Anglo-Swiss Hotel, so should see them one more time. Pretty shattered after a big day of snorkelling. Would have appreciated a sound night's sleep, but a "force 10" gale rolled in and blew down the curtain across our door. And the open door kept banging in the wind, but we couldn't shut it because the moment we did, the room became too hot and stuffy for sleep!

A final breakfast with B. and S., and T. after a dip to wake me from the crappy night's sleep. There is something "refreshing and right" about having a swim in the sea before breakfast and then eating Cornflakes with good friends in a Bedouin beachside cafe.

B. and S. savoured breakfast and missed their scheduled Mount Sinai bus. Had a reasonable quote from a mini-cab driver and looked all set to head off when the driver reneged on the deal because he couldn't get any other tourists for the trip. It seemed they might be joining us on evening bus to Cairo, but B. found an alternative option, hopefully connecting with another bus from Taba in the north.

Having said goodbye last night to K. and D., who we had met in Petra, it felt odd also saying goodbye to B. and S., with whom we had travelled since meeting on the bus from Damascus to Amman. We had grown comfortable together, and it was hard to believe our paths might not cross again.

With the Dahab Dive Team down to three, we sought shelter from the wind and sun with T. in a cafe near the best bit of reef. The fish and coral may not be as plentiful as at Blue Hole, but the variety and brilliance of colour at Dahab is still stunning. Had several 30-45 minute dives, returning to the cafe each time shivering from the chilly water — an old-timer tourist commented, "Winter's on the way."

The cafes, beach and bay filled during the day with Israelis on Jewish New Year holidays. Some had come from far afield to renew old acquaintances. I overheard one conversation where a Jewish woman, who had spent a year in Japan and a year in New York, complained to her German friend that Dahab had become "too resorty". The jet skis, drugs and sex weren't the Dahab she remembered and loved. "It's changed in five years."

I recalled an old-timer said the same to me in 1991, "You should have been here five years ago." Like the Jewish woman, I'd seen a lot of changes in five years, and it had me wondering what Dahab would be like in another five years time?

Returned our goggles and snorkels and walked past the camels one last time — they're corralled away safely at night when the cars, pick-ups and mini-buses take over the beachfront. Bought provisions and haggled for a new "food bag" starting at 20EP and setting on 10EP — oh, for fixed priced shopping! Showered and did final packing at Muhammad Ali campground. The influx of tourists made it increasingly crowded and noisy, and it was good to get away for a quiet farewell beer with T. Didn't talk much, perhaps trying to hold onto the moment, sitting on the cafe cushions, supping our cold beers, looking out to the sea and listening to the waves.

Our departure from Dahab was a chaotic contrast. The mini-bus was over an hour late leaving because the driver wanted to fill the last two "nooks" before setting off. He relented when told he'd have twelve nooks to fill if he didn't get going! There was no leg room (goodness knows how two more passengers could have squeezed on the bus), the radio blared dance music (until I reached over and turned it down), and the driver hooned along at 120 kph without lights on a crappy, potholed road. Tried to sleep and hoped we would survive the overnight trip to Cairo, Inshallah!