No time for sleeping-in and dreaming after our late night in Red Square, with breakfast served at 9 AM (6 AM in England). Well worth getting up "early" for hearty portions of eggs, sweet buns, bread and cheese, orange juice and tea -- perfect fuel for a full day of sightseeing.

Changed pounds into roubles (hoping Tamara was wrong about hard currency) and headed back to Red Square. More tourists this morning, but it wasn't "crowded". It's too vast -- except, of course, when packed with soldiers, tanks and missiles!

Morning in Red Square was as awe-inspiring as last night. Took loads of photos, especially of St. Basil's Cathedral, then we followed the Kremlin wall down to Moskva River. Bumped into Glaswegian mum and daughter from our tour group. They'd bought matryoshka dolls of Russian leaders from Lenin to Yeltsin and a fur cap (looked like real fur!). Decided I'd buy a set of souvenir dolls but skip the cap.

Spied more gold onion-shaped domes like St. Basil's over the top of the Kremlin walls, found a ticket kiosk, and for 1700 roubles (one pound), we gained entrance to the Kremlin and four of its domed churches. 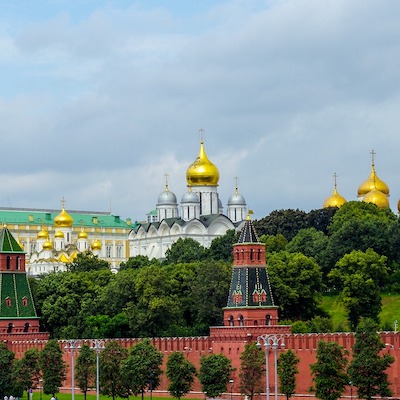 Image by Ramon Perucho from Pixabay

As with Red Square, inside the Kremlin walls, everything is vast and orderly. Soldiers with whistles and batons keep tourists on footpaths and off its cobbled streets. They likely save lives, too, as the black stretch limos of government ministers speeding about don't look like they will stop for anything, including photo-snapping tourists!

It may be fanciful, but thought we saw the silver-haired bulk of Boris Yeltsin in one exceptionally long and overmanned motorcade. Sadly, I wasn't quick enough to take a photo to confirm our sighting!

The churches within the Kremlin walls are stunning. Walking around them on Cathedral Square was like being back in Istanbul with its sculptured mosques. While inside, the pastel-coloured tombs and frescoes had the feel of the temples of Luxor. I particularly liked the small and serene Church of the Deposition of the Robe.

Paused for a picnic lunch in pleasant gardens beside a statue of Lenin (as you do). England's weather seemed to have followed us to Russia, with bands of sunshine and drizzle and an accompanying sudden rise and fall in the temperature. Grateful the sun (and warmth) held out over rain for our lunch.

Had a post-picnic wander through the gardens and then left the Kremlin in search of a cold drink. Checked selection and prices of various kiosks. Naturally, there was a tourist premium. We bought a soft drink for 600 roubles from an "independent entrepreneur" rather than from an official Coke kiosk.

Walking back to our hotel via the subway (safer than crossing Moscow's busy streets during the day), I found an English-Russian phrasebook among a collection offered by an old man on a makeshift table. Expected to be charged a premium, but he only asked 600 roubles for it, like our drink, less than one pound.

We returned to our room and had a restorative nap for a couple of hours. It was still a struggle to open my eyes at 5:30 PM -- I could have slept through the night. But the sun was still high and shining, and neither of us wanted to waste any more sightseeing time asleep.

Heading back to Red Square, I haggled over a set of Russian Leaders dolls with a subway vendor, beating him down from US$10 to US$7. I knew from the Glaswegian mum the going rate was $US6, but as he said, "One dollar is nothing to you, it means more to me."

A young boy tried to cadge the change off me by doing gymnastic cartwheels in the subway. I held out 100 roubles, but he said, "No, mister, one dollar, please." I shook my head, though I did support the Russian arts by donating a dollar to a busking string quartet. (Looking back, I'm ashamed I didn't give the boy a dollar, too!)

We bought a Moscow map in Cyrillic Russian for 600 roubles (a popular tourist price-point) in Red Square. Took more photos and then walked down to Moskva River to photograph the ghostly gothic building we could see from our hotel room. A middle-aged guy walked up and tried to sell me postcards. I smiled and practised my Russian from our new phrasebook, "Nyet, spasiba." He shook my hand and shuffled off.

We crossed onto a built-up island in the middle of Moskva River. Looking at the Kremlin Wall and minaret-like domes poking over the top reminded me of Istanbul, but on the island, I was getting flashbacks of Paris and the Seine. (Why do tourists compare places?)

Left the island and headed towards the columned entrance of Gorky Park. Western pop blared from speakers on the columns, and inside it felt like Glastonbury Festival, with different styles of music wafting from all directions and a carnival atmosphere. There were amusement stalls and a giant Ferris wheel in the distance, which we made our goal.

I'd expected Gorky Park to be a heavily wooded, secretive place. Instead, it's a well laid out and attractive (if somewhat run down) series of gardens and lakes. Nearing the Ferris wheel, we stopped to take photos of paddle-boats and black swans on a lake. Hard to imagine the couples and families paddling about, having fun, as products of an authoritarian regime. It could have been Hyde Park in London.

Growing leg weary, we skipped the Ferris wheel, left the park and crossed back over Moskva River. Couldn't find a Metro station, so we jumped on a trolley bus back to the hotel. Our new Cyrillic Moscow map came in handy, as I only had to point to our destination and let the driver read it in Russian.

However, the trolley bus did not trundle all the way to the Kremlin, and again, we searched in vain for the Metro. In desperation, we asked an English speaking taxi driver for directions. He said our hotel was five minutes by taxi or twenty minutes on foot. Not keen to commit to a taxi-ride, we thanked him and set off to walk back to the hotel.

Our landmark was the gothic skyscraper we'd photographed earlier. As we drew nearer, I wondered if it was KGB Headquarters. But later we saw several similar buildings, so like the sighting of Boris Yeltsin, it was probably just another fanciful thought. 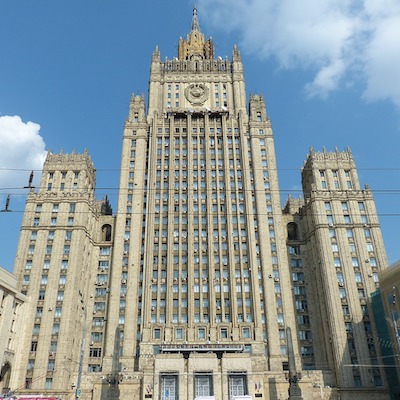 Image by falco from Pixabay

Checked our map at "KGB HQ", turned northwards and stumbled on a crowded mall, lined with shops, bars and buskers. It seemed we were surrounded by locals, not tourists, enjoying their culture and music, ranging from classical to folk and long-haired rock.

It was 10 PM, still light, but still no sign of our hotel. A crowd of people shuffled along the pavement, and we followed them like sheep, passing a line of black marketeers selling loaves of bread and bottles of beer. The crowd entered what I thought was a concert hall (but later learnt was the Metro!) and suddenly we were alone with the black marketeers.

About now, with confidence in my map reading waning, I wished we'd risked the five-minute taxi ride to our hotel. And then we spotted the red star atop one of the Kremlin's towers -- we were almost "home".

Made a last visit to Red Square for the day, arriving in time to watch the goose-stepping changing of the guard at Lenin's Tomb. Then we trudged back to our hotel, well hungry for a late dinner.

The hotel restaurant looked expensive and the clientele in the buffet bar dubious -- fairly certain it doubled as a pick-up joint. I thought of ducking back out for bread and beer from the black marketeers, but we settled for nuts and crackers in our room.

At 1 AM, I gave up writing my travel journal and collapsed into bed. Closed my eyes, but couldn't sleep -- my mind kept replaying images from our full day of sightseeing.