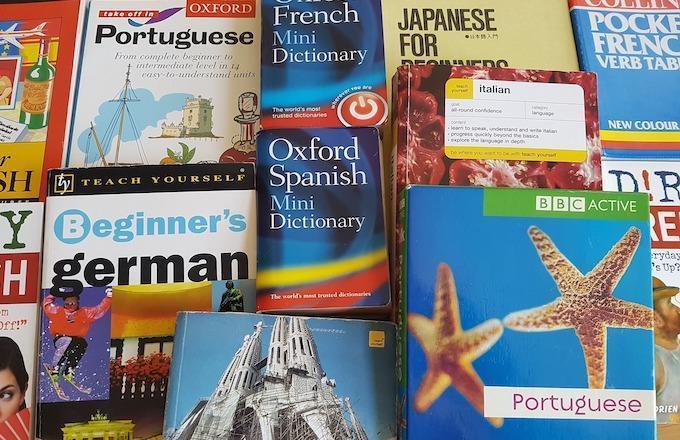 12+   As Ben Elton observed in Gridlock, there seems to be a theory among English-speaking travellers that our language is made understandable to non-English speaking people if you speak slow-ly and LOUD-LY.

Commonsense says this is rubbish, but after an hour lost in the maze of Cairo’s streets, fruitlessly searching for the 7am bus to Egypt’s western oases, I was desperate! “CAN YOU HELP ME FIND THE BUS TO BA-HA-RI-YA?”

How many Brits, Americans and Aussies would understand a similar request from an Egyptian traveller looking for the bus to Manchester? Probably most, because the request is unlikely to be made in Arabic. As with travellers from other countries where English is not the mother tongue, the Egyptian traveller would, at the very least, have some knowledge of English, from school or elsewhere.

This is what sets English mother-tongue travellers apart from the rest of the world. Most of us don’t even bother to learn a few foreign words and phrases, let alone another language before travelling overseas.

With the extent of British colonisation and recent dominance of American money and culture, English is seen by many as the world language, the lingua franca. Should beings from a galaxy far, far away ever visit Earth, then they will speak English, as portrayed in countless American sci-fi films. But it’s worth remembering Spanish is more widely spoken in the Americas than English. Everyone in the world does not speak English – and thank goodness for that.

One of the joys of travel is experiencing different cultures. And language is as much a part of culture as history, art or food. When in Rome, who would dream of ordering fish and chips for dinner instead of pasta? So, when thanking the waiter or waitress for a meal, should you say “Thank you” or “Grazie”? Choose the latter and you will receive the reply, “Prego” – You’re welcome. You’ve tasted another country’s culture, in more ways than one, and have been made to feel welcome for your efforts.

In addition to pleasantries, a few foreign words and phrases are invaluable when shopping, booking hotels, reserving buses or trains, or simply for asking for directions. A point worth noting is that many languages do not use the same Roman script for their alphabet as English. Numbers can also look different. For instance, although our numbers are based on the Arabic system, they bear little resemblance to written Arabic numbers. Knowing foreign numbers is quite handy for paying the right price at markets, or simply for finding your reserved seat on a train.

Obviously, learning Portuguese for two weeks on the Algarve is overkill. However, it’s not difficult to learn a few basic words and phrases and the effort can be quite rewarding. A few years ago while wandering the back streets of Lagos, I crossed paths with an elderly woman. She gave me a scowl as dark as her widows weeds. I smiled and said, “Boa tarde” – Good afternoon. Her wrinkled face lit up. “Boa tarde,” she responded with a smile that left us both feeling good. And to think only took two words of Portuguese!

Is it really worth the effort?

It is true that the knowledge of English is spreading throughout the world. There will be times when your much practised greetings and questions will be answered in English, particularly by the younger generation. I once approached a young guy in Vienna for directions, explaining, “Ich bin verloren”, to which he responded, “Ah, you are lost, I think it is best we speak in English.”

If this happens, don’t get disheartened. It won’t be a slight on your attempt at their language, they will be more likely be practising their own English. Persist with your new words and phrases; your efforts will be appreciated.

The American critic Dorothy Parker said of an acquaintance, “You know, she speaks 18 languages. And she can’t say ‘No’ in any of them.” Sadly, I speak only one language fluently, English. However, I have learnt to say “Thank you” in 12 languages.

So, when the Egyptian student went out of his way to lead me to the bus for Bahariya, I shook his hand and said, “Shukran” – Thank you. He smiled and replied, “Ma’a salama” – Goodbye, peace be with you.

Yes, it is worth the effort to learn another language, if only a few words and phrases!

I wrote this piece for a BBC travel magazine in 1992, when I lived in England. I’ve left out the original section on “The means of learning a foreign language”, because it’s so dated, with talk of “video” and “cassette” courses and no mention of the internet nor podcasts etc. However, I think the sections on why you should bother and how it’s worth the effort to learn another language have stood the test of time … just!