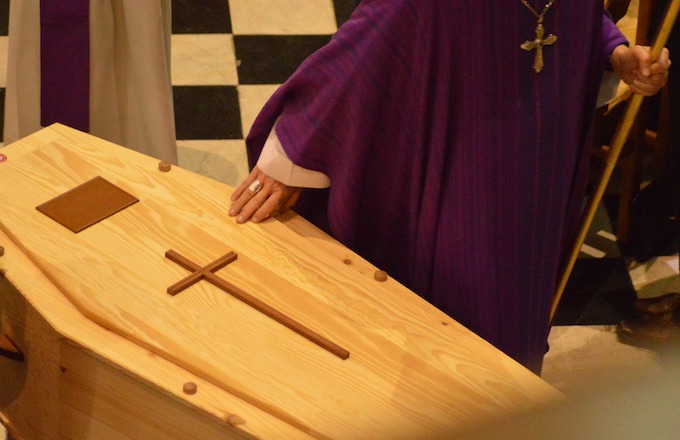 12+   Between you and me, Lenny, there are more mourners at your funeral with the COVID restrictions than would have been graveside had you died before the pandemic. Streaming it over Zoom helps boost your numbers.

Mind you, most of the faces on my computer screen are strangers or I haven't seen for ages. I recognise your ex-wife and your adult kids, vaguely. And a couple of old work colleagues.

The last time I saw Lenny, he was tanned and healthy-looking, which he attributed to playing golf. "You gotta take up golf, Bob," he advised me during our lunch. "Chasing a ball on the fairways will get you back into shape."

I chuckled and chewed my steak.

"And you gotta give up red meat," he went on, waving about a slice of salmon on his fork. "Cows graze and get fat. Fish are always swimming, so they don't drown. That's why eating fish is better for you. They're fit!"

Lenny and I had worked together in advertising. He thought up funny lines, and I wrote body copy. We made a good team and had many good times and laughs. But Lenny got greedy and moved on, and without him, my copy lacked a punchline. The firm let me go, and I blamed Lenny for it. We cut our ties, and I lost track of him.

Two years ago, out of the blue, Lenny called me. "Hey, Bob, long time, no hear. How's retirement? We should do lunch again."

And so we did, regularly, for the next year and a half. As always, Lenny did all the talking, waxing lyrical about golf and life. Like me, he had retired — unlike me, his long-suffering wife had left him. He rarely saw his kids and grandkids, and old friends didn't return his calls. Except for me.

"You know, Bob, sometimes I wonder where I went wrong?" Lenny ruminated during that last lunch. "Perhaps I was too focused on work and money and having a good time. I burned too many bridges."

I opened my mouth and was about to explain to him how I felt he had betrayed me, too. But before I could speak, Lenny laughed and added, "Thank God for golf, I say!"

Six months ago, Lenny called with the shock news he had cancer. "It's inoperable," he told me, his voice suddenly croaky on the phone. "You know what I said to the doc, Bob? Bugger!"

I meant to visit Lenny, but with COVID and lockdown, I couldn't leave the house. We spoke a few times on the phone until he got too sick. Lenny said he was reaching out to family and friends, trying to make amends. "But no one wants to talk to a dying man, Bob. That's why I like calling you."

There and then, Lenny, I wanted to tell you how much you'd hurt me. But I didn't. And now you're six feet under on Zoom.

It's too late, Lenny. But I forgive you.

With thanks to Dorothée Quennesson from Pixabay for the image of the coffin.

I wrote Too Late, Lenny in July 2020 for #FuriousFiction, a monthly 500-word short story competition run by the Australian Writers' Centre. The brief for July’s Furious Fiction was that the story had to take place at either a WEDDING or a FUNERAL, something had to be CUT, and it had to include the words OVER, BETWEEN and UNDER.

I set Too Late, Lenny at Lenny’s FUNERAL. Due to COVID restrictions, his funeral is streamed OVER Zoom. Our narrator, Bob, tells the tale,  “BETWEEN you and me”, of his friendship with Lenny, how it had been CUT and rekindled. And the story ends with Bob watching Lenny’s coffin lowered “six feet UNDER” via Zoom.

I didn't win #FuriousFiction July, but I thoroughly enjoyed writing Too Late, Lenny. However, when I shared it on Tall And True, I changed the narrative slightly. Bob’s still our first-person narrator, but in the original version, he only addresses the reader. Revisiting the story, I thought it sounded better for Bob to speak to his old friend Lenny in the opening and closing paragraphs.

And this dialogue helps make Too Late, Lenny one of my favourite short stories on the Tall And True Short Reads podcast.

You might like to read another of my #FuriousFiction short stories on Tall And True, A Jittery Journey.