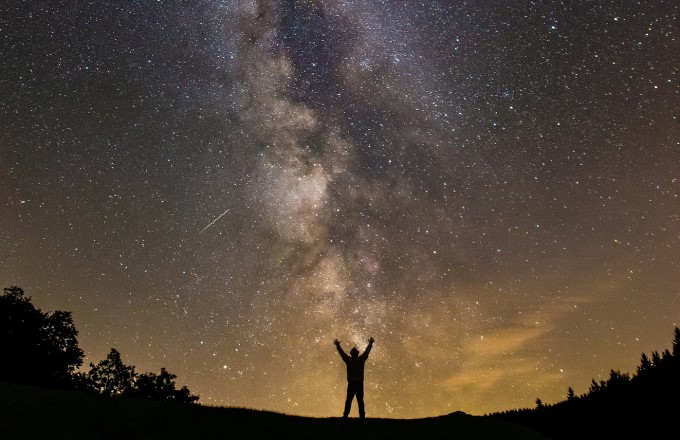 The People Were Happy

12+   A long time ago, poverty, floods, droughts, famines and war blighted a pale-blue planet. But the people endured the hardships and were happy. They believed life in the Here and Now and Ever After was predetermined and fixed like the stars in the sky. And the people found solace and solidarity in their faith.

But then something changed. Historians disagreed on precisely when it occurred or what triggered it. And instead of attributing the change to a single event wrought by natural disaster or a foreign force, most conceded it was gradual.

One theory was mechanisation caused a breakdown of cooperative effort. People no longer banded together to grow and harvest crops and build shelters and infrastructure. Now, one machine controlled by an individual did the work of many.

Others claimed the advent of mass entertainment had torn the social fabric of society. Broadcasts and projections occupied people's attention, dulling their interpersonal skills and sense of solidarity.

A third school of theorists blamed technology for separating people from the natural world and isolating them in virtual realities from the rest of the population.

There were modernists, however, who embraced the change. Yes, they admitted, poverty still existed, as did cycles of flood, drought and famine. But advancements from mechanisation and technology alleviated disease and disaster.

And while conflicts continued to rage with increasingly mechanised and technological brutality, mass entertainment and virtual reality provided an escape from the grim news of death and destruction in far-flung parts of the planet.

But even modernists privately admitted to sharing the traditionalists' anxiety over the pace of the change.

Some people numbed their fear and sadness with drink and drugs or immersed themselves deeper into virtual reality. And others looked to the stars. But the once fixed waymarkers for life and beyond had long since been obscured by smog and light pollution.

Ceasefires were declared worldwide. And a council of leaders, scientists and eminent persons convened to discuss and debate the problem and possible solutions. Modernist delegates argued a return to the past was impossible. The people could not "unlearn" mechanisation and technology. Nor could they wean themselves from mass entertainment and virtual reality.

Traditionalists accepted the change was here to stay. But setting resource consumption and renewable energy targets would slow the pace and give people time to adapt.

However, scientists shocked the council with a stark prognosis. The planet had passed a tipping point. They could not halt the change, and people would not survive its accelerating effects.

The council concluded the only hope was for a select few to leave the planet and populate a new home. And for the first time since the change, people felt a sense of solidarity. Modernists and traditionists banded together and used machines and technology to build and stock the rockets.

It was a global cooperative effort. And when the people watched the rockets launch and fly through the smog towards the stars on mass entertainment screens and virtual reality devices, they were happy.

With thanks to Evgeni Tcherkasski from Pixabay for sharing the Milky Way image.

In December 2021, the Australian Writers' Centre announced that Furious Fiction was shifting from a monthly to a quarterly short story writing competition in 2022. The change was understandable, as Furious Fiction had grown in popularity and become a massive administrative task. However, like many long term fans, I felt bereft.

To help writers cope and keep their "creative muscles twitching", the Writers' Centre launched First Friday Fix emails for the off-quarter months, with 50-word mini-story challenges. And I was honoured to be profiled as a Furious Fiction fan in their first Fix email.

I enjoyed crafting my 50-word stories for First Friday Fix. But I still missed the writing routine and adrenaline rush of Furious Fiction. So I decided to attempt an informal and unofficial version. (The Writers' Centre kindly permitted me to promote it on Twitter.)

I drew a brief at random from the Writers' Centre's 2018 Furious Fiction archive and used the same competition rules to write my 500-word short story in 55 hours, from 5 PM on Friday to midnight on Sunday.

The selected brief from May 2018 specified the story had to:

I deliberately avoided reading the winner or shortlisted entries for May 2018 because I did not want them to influence my short story. (Although I enjoyed reading the stories afterwards.)

But the brief and its accompanying photo, a fisheye lens photo of someone standing staring up at the broad expanse of the Milky Way, had me thinking of a plot and setting that may or may not be far, far away!

It might seem fanciful that the people endured poverty, floods, droughts, famines and war and were happy. And yet, as COVID-19 has proved, there's something to be said for certainty, like fixed stars and Furious Fiction.

N.B. You may like to read another of my "starry nights" inspired short stories, Signs of the Second Coming.