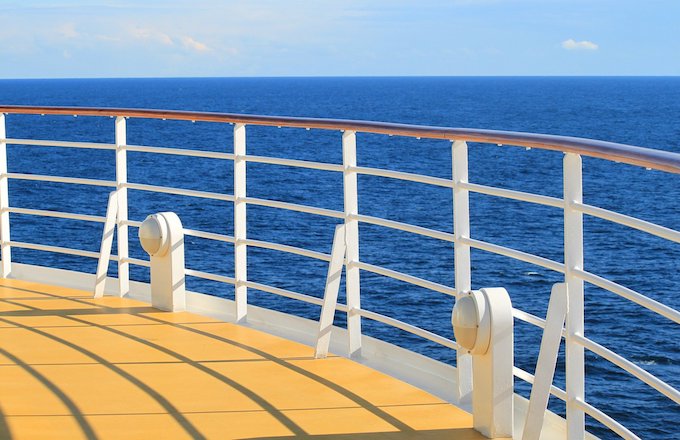 12+   Should have done this years ago. But don't tell Pearl I said that because she's been on at me for ages to do a cruise. I kept telling her I didn't want to be stuck on a floating hotel with a bunch of strangers. I'd rather spend our holidays towing a caravan around Australia, where I know the score.

But Pearl spotted a round trip cruise to New Zealand for seniors. I had to admit, the ship looked well-appointed, with bars and casinos and other free entertainment. And it was a good deal, with food included. A slice of luck, Pearl called it. And the Barnsdales, Ed and Kate, said they come along. I like Ed, he's good company over a few beers, and Pearl and Kate get on like a couple of old schoolgirls.

So I said okay, and we booked the cruise with the Barnsdales. And before I knew it, we were sailing past Sydney Heads. I've never been outside of Australia before, except once to Bali, which hardly counts. New Zealand was a pleasant surprise, with beautiful scenery along the coast and around the Bay of Islands. And picturesque stops and tours in harbour towns and cities. There are huge mountains up the Fiordland, just like in Bali. Only there's more than a sprinkle of snow on the Kiwi peaks, even in March!

Pearl's been sending the family postcards from every port along the way. She even borrowed a stamp from Kate in Auckland because she ran out of them. I told her it was silly because we'll be back home in a few days and then she can show the kids and grandkids all our photos and videos.

But apart from the sights, what I've liked, and don't tell Pearl I said this, is the ship. It's more than a floating hotel. It's like a mini-world, but with so many venues and activities on offer, I don't have to spend any time with strangers, which suits me.

I have spent a lot of time with Ed in the bars and casinos. We've enjoyed more than a few beers and the occasional win on the pokies. And afterwards, we meet the girls for dinner at one of the restaurants and let them talk us into a dance, before heading back to the bar for a nightcap.

Though please don't tell Pearl or Ed, what I've liked doing the most on this cruise is relaxing in a deckchair and staring out to sea at the horizon. Don't get me wrong, I like company, but I'm happy on my own, too.

So when the Barnsdales said they weren't feeling well tonight and Pearl said she had a sore throat and headache, I was happy to switch plans and skip the Captain's farewell party. And sit here on deck by myself.

You know what, I reckon I could get used to cruises. Perhaps I'll let Pearl talk me into doing another one when the Ruby Princess gets back to Sydney.

Thanks to Anja 🤗  #helpinghands #solidarity #stays healthy 🙏  from Pixabay for the ship deck photo. I can picture the protagonist in this story sitting in his deckchair, enjoying the view.

I wrote The Cruise Ship in September 2020 for Furious Fiction, a monthly 500-word short story competition run by the Australian Writers' Centre. September’s brief was:

The ship deck photo had me thinking of cruise ships, and that led me to write another COVID themed story, based loosely on the Ruby Princess debacle in Sydney, in March 2020.

I know someone who travelled on that cruise ship with his wife. And while thankfully neither of them got sick, his Facebook photos of the Captain’s farewell party made it look like a germ factory, even without coronavirus!

The letters SHO gave me the first word SHOULD, as in, “Should have done this years ago.” As for the other words, did you spot them in the story? Each is mentioned once and in the order, SCORE, SLICE, SPRINKLE, STAMP and SWITCH.

The 55-hour submission deadline for the #FuriousFiction competition ends at midnight on the first Sunday of the month. Although I had a fair idea of what I wanted to write, thanks to the usual weekend duties and distractions, and inevitable short story edits, I submitted my September entry with only one final furious minute left on the clock! 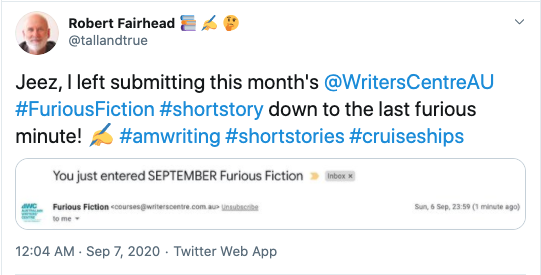 I hope you enjoyed this short journey with The Cruise Ship. You might also like to read another of my Furious Fiction stories on Tall And True, Splendid Views.