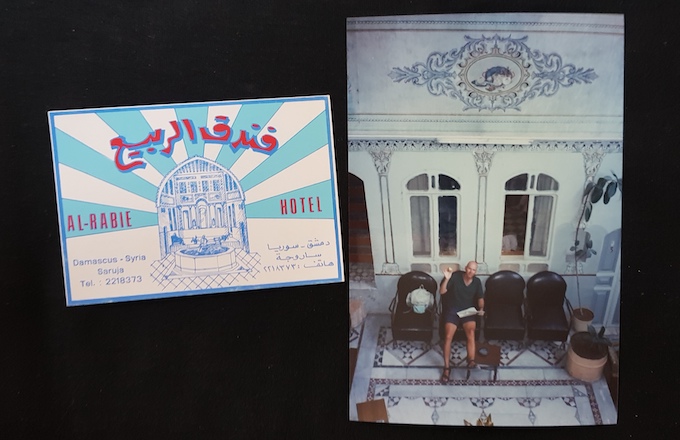 12+   The photograph is gloomy, and the colours are fading. But it was twenty-five years ago. I'm sitting in the high-ceilinged inner courtyard of the Al-Rabie Hotel in Old Damascus, catching up my travel journal.

My wife calls out from the first floor. I stop writing, look up and wave for the camera. Her photo doesn't capture the verdant vines hanging from the railings or the song of the caged birds. Nor the soothing rhythm of the fountain splashing in the centre of the courtyard. The Al-Rabie is an olde worlde oasis amid the concrete and congestion of the Syrian capital.

"Have you been long in Syria?" a clipped accent asks as I return to my journal. I look up again and see a tall, tanned, blonde-haired man with piercing blue eyes.

"Seven days," I reply, "from Aleppo, down through Hama and Homs, and across to Palmyra. My wife and I arrived in Damascus this afternoon."

"Ah, the tourist route," he says, in a tone that jars. "Klaus," he introduces himself, sitting down and holding out a hand.

After his snooty response, I'm keen to resume my journal, but I suppress a sigh and return his firm handshake. "Robert."

Klaus explains he's a Swiss archaeologist working in the Syrian desert and is in Damascus for a week to catalogue his latest findings at the National Museum.

"You must go to the museum," he tells me. "It has an excellent exhibition of Byzantine jewellery, with necklaces and pendants of gold, sapphire and pearls. Your wife would like it."

I thank Klaus for the tip but say no more, hoping he'll get bored with me.

"Will you be heading to Amman, next?" Klaus enquires.

"Yes," I confirm. "My wife and I plan to spend a few days in Damascus. And then we'll take the tourist route to Jordan." I trust Klaus notes my sarcasm and moves on.

"Good, you will enjoy Jordan. I have worked there on several digs, including Petra."

I should press Klaus for travel tips on Petra, but I want to return to my journal. We sit, not speaking for a few seconds.

"Robert, could I ask a favour?" Klaus breaks the silence, nervously running a finger around his collar. "I have an envelope. It's personal. Could you deliver it for me to a hotel in Amman?"

The colour drains from my face. "No, sorry, I can't do that, Klaus. Goodnight." I stand and head to my room, not mentioning the strange encounter to my wife.

Later that night, there is a commotion in the courtyard. I get up and watch from the first floor as a pair of police frogmarch Klaus from the hotel. He glances up, fixes me with his piercing eyes, smiles and winks. Suddenly I feel scared. I wake my wife, and the next morning we leave Damascus.

Unlike the photo, my memory of that distant evening hasn't faded. Nor of the envelope, Klaus somehow slipped into my travel journal at the Al-Rabie Hotel.

The Al-Rabie Hotel is the short story I wrote in November 2020 for the Australian Writers' Centre's monthly Furious Fiction writing competition. For November, the 500-word story:

I was working on a travel piece when the brief arrived, based on ten days I spent backpacking in Syria in 1995. In addition to my travel journal from that period, I had pulled out photos to use in the piece. And one was of me sitting in the courtyard of the olde worlde Al-Rabie Hotel in Damascus.

My journal had an entry about meeting a well-travelled American in the hotel courtyard, whom I'd described as a "know-all". But I'd also noted we had a good conversation when I steered it towards "subjects on which he had knowledge as opposed to those where he had an opinion".

There was also an entry about another traveller who had offered to write a letter for me to give a hotel manager in Amman, Jordan, to claim a book he'd left for safekeeping.

I used the photo and journal entries to create a mystery short story set in the Al-Rabie Hotel. As for the words from the brief, can you uncover them in the story? Here’s a tip: I used each word once.

I'll leave it to your imagination what Klaus's envelope may have contained. However, it’s worth mentioning, the black market and security forces were ever-present during my time in Syria in 1995.

I hope you enjoyed your short stay at the Al-Rabie Hotel. You might like to read my travel piece on Syria, Syrians Love Peace (January 2021).