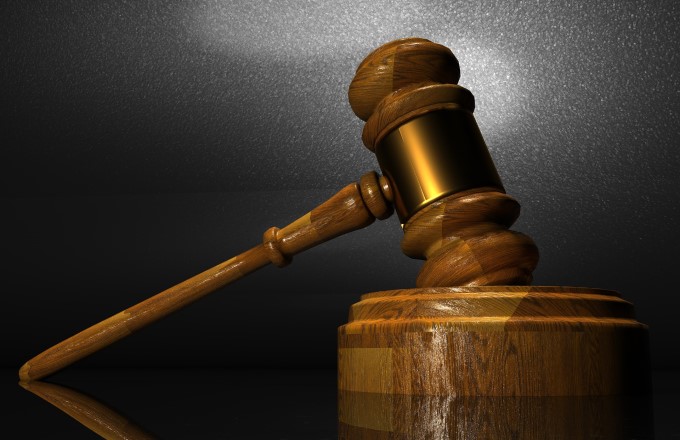 18+   The policewoman at the front of the Court is trying to catch my eye. I have a thing for women in uniform. It's what attracted me to my wife. That night we met, in the pub across the road from the hospital where she worked as a nurse. I couldn't stop fantasising about the front zip on her uniform.

The policewoman is mouthing something, her lips forming the words, "Guilty or not guilty?"

I shake my head vigorously (partly to banish thoughts of my wife's zip and the policewoman's lips) and mouth back, "Not guilty." She shuffles some papers before signalling the same query to the beefy bloke sitting beside me.

"Not guilty," I hear him mumble. But in his too-tight suit, I measure up "Beefy" as guilty as charged. The policewoman shifts her attention to the next case, a fifty-something woman dolled-up like she's come to Court from a seniors' escort agency. "Not guilty," she whispers huskily.

"Ha!" I want to laugh aloud. But I feel like crying, too, because the policewoman must be prioritising cases. And I realise, the more who plead "not guilty", the longer I could be stuck in Court.

I close my eyes and try not to think about "Beefy" sweating beside me or "Dolled-up's" wafting perfume. Or my wife or the policewoman. Instead, I rehearse my defence for the unpaid parking fines.

"It's an honest oversight, Your Honour," I'll explain. "I forgot to change my address when my wife and I separated."

I'm banking on a sympathetic judge. But it's six months since the separation, and I should have updated my address long ago.

The truth is, I've remained hopeful my wife and I can smooth out our rocky relationship. It was my fault. I should have been more attentive. Perhaps if she'd slipped on her old nurse uniform occasionally?

The judge enters the Court, and proceedings begin. The policewoman has prioritised "guilty" cases, with the judge dispensing fines and sentences like an assembly line worker. And then it's the turn of those of us pleading "not guilty".

The policewoman calls "Dolled-up" first, charged with hitting an escort agency client over the head with an umbrella. (Ha, I was right!)

"He made an improper suggestion," she asserts indignantly. And after querying the "suggestion", the judge records a good behaviour bond without conviction.

"Beefy" is up next, charged with stealing a car. (Ha, again!)

"I only borrowed it," he protests. "I meant to leave a note but I couldn't find a pen and paper." I'd expected "Beefy" to thunder like Thor. But he pleads his innocence in a squeaky childlike voice that sounds like he's been sucking on a helium party balloon. And the judge takes pity on him.

Finally, it's my turn. Taking the stand, I try not to glance at the policewoman and instead stare out at the others also waiting to plead "not guilty". I think of "Beefy" and "Dolled-up" and my wife and the policewoman.

And I feel the Court's judgement.

With thanks to Okan Caliskan from Pixabay for sharing the image of the judge's gavel.

After writing and submitting the story (my seventeenth straight entry), I wrote a blog post about the experience, Writing True Sentences. I revealed recalling Ernest Hemingway's advice to writers to write one true sentence. And how I started with, "The policewoman at the front of the Court is trying to catch my eye."

I had a COURT setting and an opening scene to build upon with more true sentences, half-truths and pure imagination. For example, it's true a policewoman once tried to catch my eye in Court. But my wife's never been a nurse. However, I dated a nurse before my marriage, so that part was a half-truth. The rest is imagination.

As for BALLOON, ROCK and UMBRELLA, I felt confident I'd find a place for the first two words. But I sweated on the third until it occurred to me why "Dolled-up" might be attending Court.

In the blog post, I also quoted George Saunders, who has observed, "A short story will undergo hundreds of edits. It's done when it's done. I know it when I see it."

It's the same for me and my stories. A shiver ran up my spine when I wrote the last sentence, "And I feel the Court's judgement." That's how I know when "it's done"!