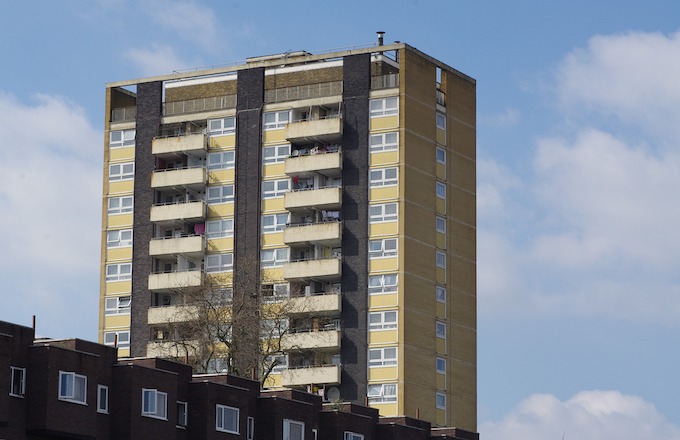 Both Sides of the Story - A Council Flat

18+   The sound of the twins fighting in the bedroom filled the flat. Their screams drowned out the drone of sport on the TV and the sizzle and bubble of dinner on the kitchen cooktop. "For Christ's sake, Ruth," Stu bellowed over the TV, "shut those bloody kids up, will you!"

Ruth lifted the lid from the pot of potatoes. She turned down the gas and waited for the steam and boiling water to subside. Stu shouted at the twins and turned up the TV. But they kept fighting, and Ruth heard him charge into the bedroom. The flat shook with violence as Stu beat the twins. And then there was only the drone of the TV and sound of dinner cooking. Ruth replaced the lid on the potatoes.

"Why can't you stop those bloody kids fighting?" Stu demanded, thundering into the kitchen. "They're at it all bloody day." He opened the fridge door and grabbed a can of beer. "What's a man got to do to get some peace?"

Ruth moved the sausages to stop them from sticking to the pan. The pot of mixed vegetables boiled over. She lifted the lid, turned down the gas, and waited.

"How long till dinner?" Stu asked, opening the can and taking a long drink.  Ruth watched a stream of beer dribble down Stu's unshaven chin and onto the floor. "Well?" he prompted, wiping his mouth with a tea towel. "Are you deaf as well as stupid?"

Ruth dropped her eyes and replaced the lid on the vegetables. Stu swore at her and stomped back to TV. Ruth heard the twins crying in the bedroom. She turned up the gas on the sausages, letting them sizzle loudly, and prayed the twins would stay quiet.

It hasn't always been like this, Ruth reassured herself, staring out of the tenth-floor window at the wispy clouds hanging in the pale sky. It's a bad patch. Stu's been under a lot of pressure since he lost his job. It's hard for a man, sitting in front of the TV all day, especially with the twins carrying on from dawn to dusk.

"It's their diet, dear," the elderly social worker had explained on her last visit. "Children eat too many sweets these days. It makes them hyperactive. You must be firm with them, feed them good food, like a good mother."

Yes, but how do I stop them screaming and fighting? Ruth had wanted to ask but didn't. Instead, she'd nodded, promised to give the twins healthier food, and agreed to meet the social worker again in two weeks. Stu hated her visits.

"A bloody old busy body," he'd called her. "Put on to us by some sodding nosey neighbour. What's it got to do with her what we feed the bloody kids?"

Something was burning. Ruth looked down at the sausages, now blackened and stuck to the bottom of the pan. She lifted it from the cooktop and turned off the gas. Stu was swearing at the twins; they were fighting again.

Ruth turned off the potatoes and vegetables. She had planned to mash the potatoes. But now she just wanted to serve dinner, even if it was overcooked and burnt. Hopefully, it would calm things for a while. The flat echoed with the drone of the TV and screams of the twins.

"For Christ's sake, Ruth," Stu bellowed again over the TV, "hurry up with my bloody dinner, will you. I'm starving."