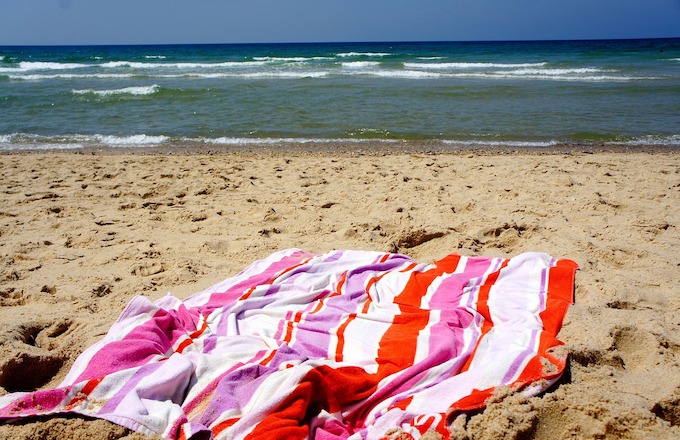 Escape to the Beach

18+   The golden sand squeaks in protest as Megan presses her body more firmly into the beach towel. A gentle breeze carries a salty scent and chills the sweat glistening on her sun-toasted skin, as gulls crawk and waves break in a relaxing rhythm. Megan licks her lips and sighs. And then a phone rings.

Megan clenches her teeth. It’s Edward’s phone — she waits for her husband to silence the interruption. The phone drones on.

"Answer it, Edward!" she explodes, opening her eyes and turning towards him.

The beach vanishes; the phone keeps ringing. Megan groans. She switches on her bedside lamp and reaches across her husband's vacant side of the bed for the phone.

"Yes, who's calling, please?" she asks, rubbing sleep from her eyes and squinting at the alarm clock on the bedside table. 2 AM.

"Is that you, Meg?" asks a young woman with a familiar faux American accent. Megan's face flushes hot — she is suddenly wide awake.

"Of course, Zoe," Megan snaps, "who else would be answering our telephone at two in the morning?"

Now there is loud sobbing. Megan does a quick time zone calculation — it's 9 PM yesterday in New York.

"Zoe, what's happened?" she asks in a flat, no-nonsense tone as if questioning one of her daughters during their turbulent teenage years.

"This morning, Ed, he had a heart attack while out jogging. An ambulance took him to the hospital. But —" Another pause. Megan resists the temptation to tell Zoe to hurry up. "Oh, Meg, he's dead. Ed died this evening."

There is more sobbing at the other end of the line. Megan draws a deep breath but feels nothing, not even guilt for feeling nothing.

"Thank you for letting me know, Zoe," she says matter of factly. "I can't talk now. But I will call Edward's office later today."

Megan knows she should console the younger woman, but instead, she hangs up the phone and lays back on her side of the bed. Megan switches off the bedside lamp and closes her eyes.

In the morning, she will call her daughters with the news about their father. Then she will call his office and other family and friends and organise the funeral.

Tonight all Megan wants to do is to forget her failed marriage and Zoe's phone call, and to fall asleep again and escape to the beach.

With thanks to GREGOR from Pixabay for the beach towel image.

I wrote a version of Escape to the Beach in 1991, when I lived in England, as the entry requirement for a local tutor-led writers' circle.

The tutor panned my short story as "too vague". And looking back, it was vague and flowery AND had an unbelievable premise. In the original version, the forsaken wife, Megan, had remotely dispatched her philandering husband, Edward, by using medieval magic, which she had studied at evening classes!

Setting aside the silly storyline, almost thirty years on, I still loved the contrast between Megan's dream and her response to the phone call. And so I re-worked the short story, and with middle-aged insight, added her desire to shut out reality and escape to the beach.