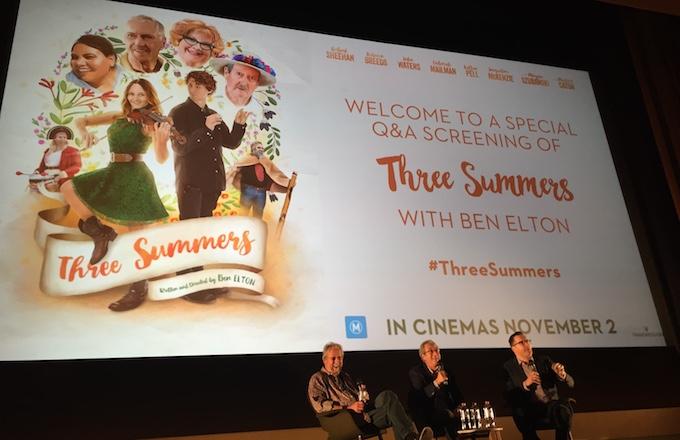 12+   Disclosure: I have admired Ben Elton's work since watching him do stand-up comedy on TV in England in 1987. I also loved the hit TV comedies he co-wrote in the 1980s and 1990s, The Young Ones and Blackadder. And I have enjoyed his novels, starting with Stark (1989) through to his recent, Time and Time Again (2014).

All of which made it extremely unlikely I would not enjoy Three Summers, a film Elton wrote and directed. Oh, and my brother was the film's First Assistant Director!

Elton set Three Summers at a fictional folk festival in the southwest of Western Australia, "Westifal" — inspired by the annual Fairbridge Festival held in Pinjarra, 100 km south of Perth. Over three summers, we meet an ensemble cast of characters who bring to the festival campgrounds their individual stories, some of which intersect and develop. And others that don't, like the middle-aged couples who meet every year and sit between their parallel parked VW campers to chat, eat and quaff wine without ever attending an event.

Australia in a tent

The Westival campground, program and big tent performances will be familiar to those who've attended a Fairbridge Festival (the film uses footage from Fairbridge) or even Glastonbury in England (without the campervans!). Elton describes Three Summers as "Australia in a tent", and the main stories are quintessentially Australian, dealing with Indigenous peoples, immigration and refugees. But the film also offers romance, teenage rebellion, folk music and more. 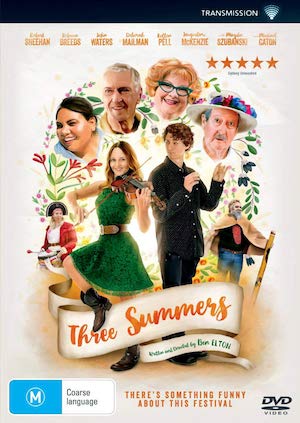 The ensemble cast of actors reads like a Who's Who of Australian comedy and drama:

And the film's young stars provide the romantic and recurring central thread:

Theirs may not look like a match made in heaven, but they share a passion for music and, as the clique goes, opposites attract — or do they?

Weaved around the romantic thread, Three Summers raises the historical and contemporary issues of the treatment of Australia's Indigenous peoples, the debate over immigration, and the indefinite detention of refugees and asylum seekers. The film is thought-provoking and could make some feel uncomfortable about their views.

I attended the Ritz Cinema for the Sydney premiere of Three Summers. Afterwards, there was a Q&A session with writer/director Elton and actor Micael Caton. Although Elton is English born and bred, and England is where he made a household name for himself, he has spent half of the past thirty years of his life in Australia. He met his Australian wife on a "Downunder" tour in 1987, which led to setting his first novel, Stark, in Western Australia.

During the Q&A, Elton professed great pride in the local film industry and joy that he'd finally made an Australian film in his adopted country.

I thoroughly enjoyed Three Summers. I laughed heartily at the funny bits, tapped my foot during the musical bits, and had a good long think during the thought-provoking bits. It's a film I've recommended to family and friends and would enjoy seeing again.

While he describes Three Summers as "Australia in a tent", Elton also said something quite poignant at the end of the Q&A session:

I think this summarises the goal and achievement of this beautiful film perfectly!

Further Disclosure: After the Three Summer's Q&A session, Ben Elton kindly signed my yellowed copy of Stark, which I read way back in 1989.

N.B. You might also like to read another film review I've shared on Tall And True, Ex Machina Movie.