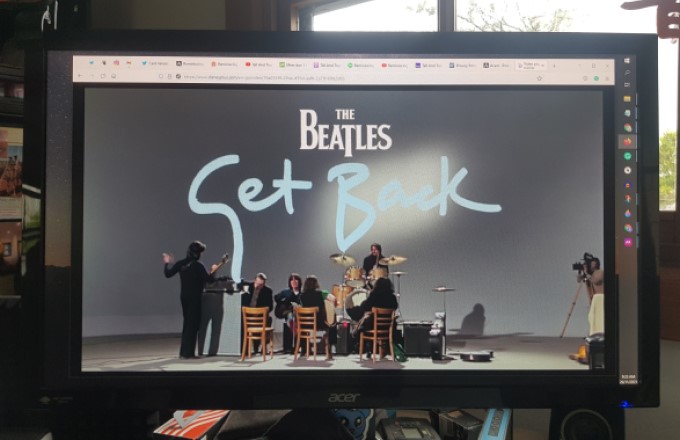 The Beatles Get Back

12+   I was born in 1962, the same year as the Beatles released Love Me Do. Serendipitously, this is the first song on my first Beatles record, The Essential Beatles, from 1972. Fifty years on, I have a collection of Beatles records, books and DVDs. So, of course, I was keen to watch Get Back on Disney.

In a blog post on John Lennon (May 2018), I recounted how my first Beatles memory is not their music. Instead, as a five-year-old, I saw a newspaper photo of John, Paul and George hammering an oversized nail into Ringo's head. And I remember my mother tutting and telling me the Beatles were silly to play with hammers and nails.

My next clear memory at eight involves a school friend. His family had a record player, and his teenage sister had Beatles records. I had neither at home. And I joined the "gang" at his place one day after school, singing and dancing to the Beatles.

But shortly after this, I recall hearing the news on our kitchen radio that the Beatles were breaking up. I was devastated, as was my friend's sister. She refused to play their records after the break-up, which ended my singing and dancing with the Beatles. At least, until my family bought a record player and I got The Essential Beatles LP! (This became so scratched, I replaced it with a cassette in 1978.)

I'm now in my late fifties. I've listened to the Beatles catalogue countless times, read a small library of Beatles books, and watched their Anthology DVDs and other documentaries.

I know the troubled history of the Let It Be film and album and how it contributed to the end of the Beatles. Or so I thought!

Spoiler alert: My review and reflections assume the reader has seen Get Back or is at least a knowledgeable Beatles fan, like me!

Having sat through (and thoroughly enjoyed) Peter Jackson's Lord of the Rings and The Hobbit trilogies at the cinema, Get Back in three long parts wasn't a surprise. But unlike the trilogies, Disney released Jackson's eight-hour documentary film on the Beatles over three consecutive days. And I watched it every day.

Part 1 opens with a familiar montage from the early days of the "lads from Liverpool" to the "White Album" and segues to John, Paul, George and Ringo meeting for the first time at the cavernous Twickenham on January 2 1969.

The Beatles have less than a month to write and rehearse songs for their provisionally titled "Get Back" album and a proposed live performance. And all the while, they're being filmed on "candid camera" for a planned TV special.

George sets an early dour tone for the project, observing, "I don't think this is a very acoustically good place." And the karma of the sessions soon turns dour, too, with tensions rising as "bossy" Paul chivies his bandmates. John looks disinterested (and sometimes stoned) with Yoko beside him, Ringo bored waiting for his drum part, and George increasingly frustrated.

The strained atmosphere culminates in George's famous (and uncomfortable to witness) response to directions from Paul on his guitar playing:

Part 1 closes with a glowering George leaving the band and John commenting acidly, "If he doesn't come back by Tuesday, we'll get Clapton." But after a stress-relieving wild jam with a wailing Yoko and a sombre group hug, John, Paul and Ringo decide to meet George and try and convince him to rejoin the band.

A screen caption reveals, "The meeting does not go well", and the credits roll. And although I (and the whole world) know George returns, it felt like a will-he, won't-he cliffhanger ending!

The 157-minute Part 1 left me emotionally exhausted. The mood had been reminiscent of the original downbeat Let It Be film. And social media feedback on the instalment centred on Paul's "bossiness" and the stresses and fractures within the relationships.

Where was the "joy" Peter Jackson said he'd unearthed in the original film footage!?

Despite this, I'd loved watching and hearing the Beatles work on their raw songs. Especially the hits I knew so well, in their finished form, like, Get Back. And I looked forward to Part 2.

Following on from Part 1's tumultuous ending, Part 2 opens with Ringo commenting the "meeting [with George] was fine" and "there were a lot of good things [said]". But "they all sort of fell apart in the end".

Paul and Linda join Ringo at Twickenham. And we learn Yoko spoke on behalf of John at the unsuccessful meeting. Lore among many Beatles fans is that Yoko is responsible for the band's break-up. But as Paul presciently observes:

"It's going to be such an incredible comical thing [to suggest] in fifty years time: They broke up because Yoko sat on an amp."

After hearing Paul and John's secretly recorded canteen conversation on the causes behind the band's deteriorating dynamics, I feared Part 2 would prove another long, joyless instalment.

But then George returns to the fold, and the Get Back project moves from Twickenham to Apple Studios in Saville Row, London. The band starts working tighter together. And there are smiles and laughter in the studio, with "Goonish" John cracking jokes and pulling funny faces.

The main change in mood occurs when Billy Preston "drops by", and John invites him to play electric piano on the album. Billy's enthusiasm is infectious on an "audition jam". And John announces, "You're in the group!", soon adding, "You're giving us a lift, Bill."

Within a few days, George Martin comments to a much happier looking George, "You're working so well together. You're looking at each other; you're seeing each other." And along with the improvement in the Beatles' songs, we finally see (and hear) the promised joy of the Get Back sessions.

However, the live performance remains unresolved. A Roman amphitheatre, P&O cruise ship and Brighton are rejected as locations. There's talk of abandoning the concert, but Paul wants an appropriate "payoff" for the Get Back project. And then filmmaker Michael Lindsay-Hogg and recording engineer Glyn Johns suggest the rooftop of Apple's building, and Paul's face lights up.

The Beatles, filmmakers and sound engineers scramble up onto the rooftop. (It's a sight that would have safety officers sweating in their hi-viz vests, hardhats and harnesses today!) And despite concern it may not support the weight of the band and all their equipment, they set a date for the rooftop performance.

Thanks to the relocation from Twickenham to Apple Studios and the addition of Billy Preston, the long 173-minute Part 2 fulfilled Peter Jackson's promise to fans. The Beatles looked happy and sounded great. And I only had one more sleep until their famous final concert.

Part 3 contains some of my favourite scenes from Get Back. One of these is watching "uncles" John, George and Ringo interacting with Linda's six-year-old daughter, Heather, in the studio and the close bond with her adopted dad, Paul.

The songwriting and rehearsals are tighter in the studio, the songs less raw and more polished. But there are still joyous moments of free-form jamming and fun and laughter. Even when Glyn Johns reminds the Beatles over the mixing desk tannoy, "You do realise this tape is costing you two shillings a foot?"

However, there is also a sense of foreboding for knowledgeable fans when Paul leaves the studio for a brief meeting. And in his absence, John recounts to George and Ringo about his and Yoko's private meeting with American businessman and wannabe Beatles manager, Allen Klein. "He knows everything about everything," John enthuses.

But the focus of Part 3 is the rooftop concert, and as Paul says:

I've watched the Beatles perform the rooftop rendition of Get Back on YouTube many times. But I hadn't seen all the rooftop songs. And I didn't know that several of the live versions appear on the Let It Be album.

Most onlookers in the streets below and clambering across neighbouring roofs appreciated the free concert, with comments including:

"I think it's jolly good."
"I reckon they give a bit of life to London."
"It's nice to have something for free in this country at the moment, isn't it?"

But there were pin-stripe suited party-poopers, too:

"This type of music is all right in its place, but I think it's a bit of an imposition. First of all, it's too loud."

And eventually, the local constabulary is summoned. I felt sorry for young Police Constables Dagg and Shayler sent to restore law and order. But they provided two of the best lines from Part 3:

"Aren't these studios soundproofed or something?"
"If you're doing a picture, I'm sure you can dub the sound onto the film, can't you?"

Finally (and fittingly), the power is pulled on the amps and the rooftop concert after an encore of Get Back. A screen caption informs us, "This was the Beatles' last public performance." And John thanks the cheering crowd on the roof, enquiring, "I hope we passed the audition."

The 138-minute Part 3 ends with John, Paul, George and Ringo reviewing their rooftop takes. And the following day, the Beatles return to the studio to record acoustic tracks for the album, including Two of Us. I won't lie. I shed a tear or two as the credits rolled, and they recorded Let It Be, the final track on my 1972 The Essential Beatles LP. 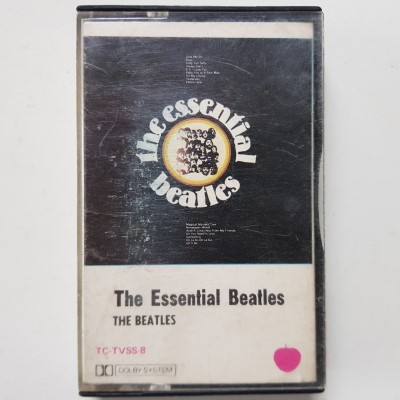 Peter Jackson's marathon Get Back film shows the Beatles as working musicians. Not past their prime, but very much still the "best band in the world". Although, even without the benefit of hindsight, signs of the impending break-up were clear to see.

I still love John. However, Get Back had me reevaluate my feelings for all of the Beatles. Yes, Paul was "bossy", but he was musically brilliant. And yes, George was moody, but Eric Clapton couldn't have replaced him, despite John's caustic comment. And yes, Ringo sat around waiting for his drum parts, but "Richie" was the glue that held the band together for the Get Back sessions.

So now my favourite Beatles are John, Paul, George and Ringo. And I say thank you, Peter Jackson and Disney Plus, for helping me see that with The Beatles Get Back!

N.B. You might also like this 2018 blog post I shared on Tall And True, titled Albums That Changed Your Life. The Essential Beatles didn't make my list of 18 favourite albums on vinyl, MP3, CD and cassette. But the Beatles Blue (greatest hits 1967-1970) and White albums came in at number 1 and 15, respectively.