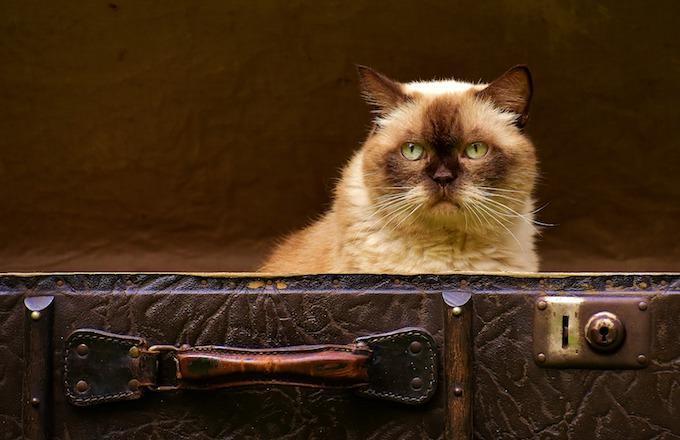 Stevie's heart was thumping hard again. The footsteps stopped, and the lid of the trunk lifted. A bright light shone into Stevie's eyes, blinding him. "Nooo!" he screamed, and the light dipped.

"It's okay, son, don't be frightened," a strange, shadowy figure reassured him. "I'm a policeman."

Stevie blinked, as his vision gradually recovered. First, he made out the uniform of the policeman standing beside the trunk. The police had come to save him from the gangsters! Perhaps they had come to rescue the kidnapped cat, too? Stevie stood up and stepped out of the travel trunk. He looked around the room, which was once again crammed with wonky furniture and his dad's tools. He was back in the shed!

"I've found him," the policeman turned and called out, "he's in here." Stevie's mum and dad ran through the shed doorway and hugged him. Stevie's dad ruffled his hair while his mum kept kissing him and crying. Stevie's eyes were full of tears, too.

But later that night, Stevie was the happiest he'd been in a long time, perhaps since his last birthday. His mum had given him two helpings of ice-cream, and his dad had set up the second TV in his bedroom. And best of all, Stevie hadn't heard his parents fight all night. (Nor had he been told off for going inside his dad's shed!)

The policeman had talked to him about the dangers of hiding inside trunks. Stevie had been tempted to tell the policeman about the gangsters and the kidnapped cat, but he decided against it. After all, Jerry and Daphne must have been a dream.

A knock at the door interrupted Stevie’s thoughts. His parents entered the room.

"Are you feeling better, love?" his mum asked. Stevie nodded, hoping she would offer him a third helping of ice-cream.

"We've got a surprise for you, son," his dad announced, lifting something out of a cardboard box. "Look what I found lurking in the shed," he said, holding out a rusty coloured cat with white socks, a smudgy face and green eyes. "Miaow," said the cat.

"Tom-Tom!" Stevie exclaimed in joyful recognition. The cat purred and rubbed its whiskers against his outstretched hand.

“Looks like you chose the right name for him, love,” Stevie’s mum commented.

"Of course, we can't keep it for good until we've checked if anyone's reported him lost," his dad warned. "He looks like a fine, healthy cat, so it probably comes from a good home. But if no-one claims him, I guess we can keep the cat."

Stevie smiled and stroked Tom-Tom's head. The cat purred louder and nestled on the bed against him.

“Well, we'd better all get some sleep, now,” his mum said, tucking in his blankets. “You won’t forget what the policeman told you about hiding and curiosity killing the cat, will you, Stevie?”

Stevie shook his head, and his parents kissed him goodnight — even his dad! — and left the bedroom, turning off the TV and light.

Tom-Tom's eyes gleamed in the dark, and Stevie smiled, feeling the cat's body purring beside him.

He thought about what the policeman had told him. As Stevie saw it, this was one time where curiosity saved the cat, in more ways than one. And the cat in the trunk, Tom-Tom, purred in agreement.

With thanks to Alexas_Fotos from Pixabay for the perfect image of the cat in the trunk.

I wrote The Cat in the Trunk for a writing competition in England in the early 1990s. The short story had to be 2000-3000 words long and based on the theme Curiosity Saved the Cat.

I was (and remain) fascinated by the possibilities of space-time travel, whether it be real-world, hypothetical or the stuff of dreams. Looking at my original notes, I borrowed the old travel trunk from another plot idea. In that one, the boy was transported to different places by polishing its exotic stickers. He cleaned the dust off a sphinx sticker, hopped in the trunk and ended up in Cairo.

For The Cat in the Trunk, I added Stevie’s arguing parents, the gangsters and, of course, the curious cat. And though I left the dusty stickers on the trunk, they no longer set the travel destination.

Did Stevie dream about Jerry and Daphne after watching the old movie on TV? Or did he travel inside the trunk to the gangster’s hotel room, in the same way as Tom-Tom had escaped to the shed? I’ll leave that to your imagination.