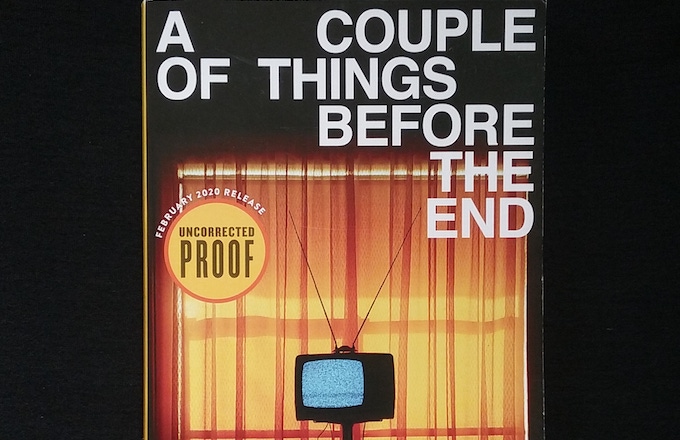 A Couple of Things Before the End - Sean O'Beirne

12+ "Short stories are tiny windows into other worlds and other minds and other dreams. They are journeys you can make to the far side of the universe and still be back in time for dinner." A quote by Neil Gaiman and a perfect description of A Couple of Things Before the End: Stories by Sean O'Beirne (Black Inc., 2020).

In a slimmish, 201-page volume, O'Beirne's debut short story collection gifts the reader with eighteen windows into other worlds, minds and dreams, set in the past, present and future, and all painted on an Australian canvas.

The diverse characters and themes in the collection include a young actress who flirts with a wild Barry Humphries on a London-bound passenger ship in the 1950s. A teenage boy recounts his last year of high school and first real girlfriend, from a first kiss to sex in the 1980s. A security guard delivers a redacted report on the plight of asylum seekers in a Nauru detention camp. The leader of the New Australia Party sets out his racist, authoritarian agenda at a post-election press conference in the not-too-distant future. And a woman pleads to be accepted by a private gated community to escape the heat and rising sea levels threatening her well-to-do home in a climate-changed world. 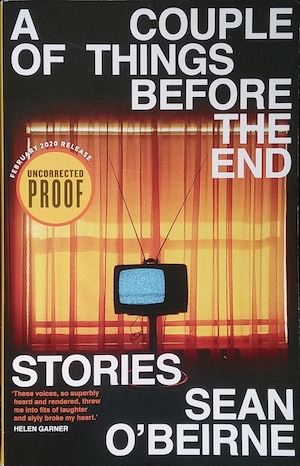 O'Beirne also experiments with form in his writing. In addition to traditional narrative and dialogue structures, the stories are written as diary entries, letters, interviews, phone calls, texts, speeches, reports, social media posts and emails. And O'Beirne closes the collection with the heart-wrenching child-like journal of a young woman eking out a living in a post-apocalyptic underground car park.

A Couple of Things Before the End receives high praise from noted Australian literary figures on the cover. Helen Garner writes:

“These voices, so superbly heard and rendered, threw me into fits of laughter and slyly broke my heart.”

“How do we speak and write into a future? I think Sean O'Beirne is showing us the way of doing it.”

I read O'Beirne's short stories in bed at night before going to sleep. But, unlike Gaiman, I had the joy of journeying to the far side of the universe without worrying about being back in time for dinner.

And in the anxious days of coronavirus and self-isolation, A Couple of Things Before the End provided the escapism I craved.

Note: This book review originally appeared on the Writing NSW website (June 2020). You might like to read another of my Writing NSW reviews on Tall And True, Beneath the Willow by Michael J Murphy.