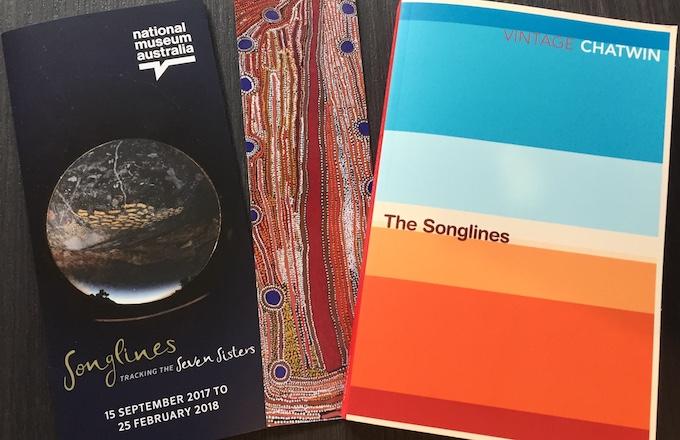 12+   Over many years and many moves, I've cultivated and culled my book collection. Now have a manageable medium-sized library, books I haven't got around to reading and those I plan to read again ... one day! Somewhere along the way, I misplaced a favourite from the 1980s, a book I had always looked forward to re-reading, The Songlines by Bruce Chatwin.

A trip to Canberra with my son in December 2017 and a visit to the Songlines: Tracking the Seven Sisters exhibition at the National Museum of Australia (NMA) was a perfect opportunity to learn more about the importance of Songlines in Indigenous culture and to look for a replacement copy of Chatwin's classic book.

I first read The Songlines in the late 1980s. I was an Australian living in England, viewing my country's Bicentennial Celebrations from afar. But while I had set off from Australia as a "proud Aussie" backpacker, the debate and documentaries on the treatment of Indigenous people triggered by the celebration of "200 years of colonisation" left me feeling uncomfortable. It also made me want to know more. And so I read Chatwin's The Songlines and books by other non-Indigenous writers, like Fatal Shore by Robert Hughes, and Indigenous writers, My Place by Sally Morgan and When the Pelican Laughed by Alice Nannup.

It may seem strange that it was Bruce Chatwin, an English writer, who introduced me to a foundation of Indigenous Australian culture, Songlines. But back in the 1970s, schools taught very little about Indigenous people, or "Aborigines". We learned they had been in Australia for 20,000 years (now revised to over 60,000 years!) and were nomadic. When they weren't on "Walkabout", "Aborigines" sat under trees in parks and got drunk. A few became famous footballers and boxers, and one won Wimbledon. But none were ever our neighbours.

Reading parts of Chatwin's The Songlines recalls the commonplace racism of the time. Descriptions of Indigenous people as "Blacks", "Abos", "Boongs" and "Coons", and the women as "Gins". And the reaction to "Land Rights people" who supported Indigenous claims over their traditional lands: "You're standing in the way of progress. You're helping [Aborigines] destroy white Australia."

However, the book's focus and beauty (and what's seared into my memory) is Chatwin's search for a definition of Songlines for Indigenous people. He learns they are more than "maps". They are "Dreaming-tracks", "a means of bringing the Dreaming into existence", "sacred and ceremonial sites", "title deeds to traditional lands", "trade routes and ways of communication". Songlines can stretch vast distances and language barriers. "A Dreaming-track might start in the north-west, near Broome; thread its way through twenty languages or more; and go on to hit the sea [in the south] near Adelaide."

The Songlines: Tracking the Seven Sisters exhibition at the NMA (15 September 2017 to 25 February 2018) is an Indigenous-led exhibition about a founding Dreamtime narrative, the Seven Sisters Dreaming. It uses Indigenous ways of passing on knowledge through traditional artwork and modern multimedia, including videos, overhead projections and VR (virtual reality) screenings.

There's also a shop in the art centre hub, where you can buy paintings, baskets, sculptures and merchandise "sourced from directly from the art centres involved in the exhibition." And where I bought another copy of Bruce Chatwin's The Songlines for my library.