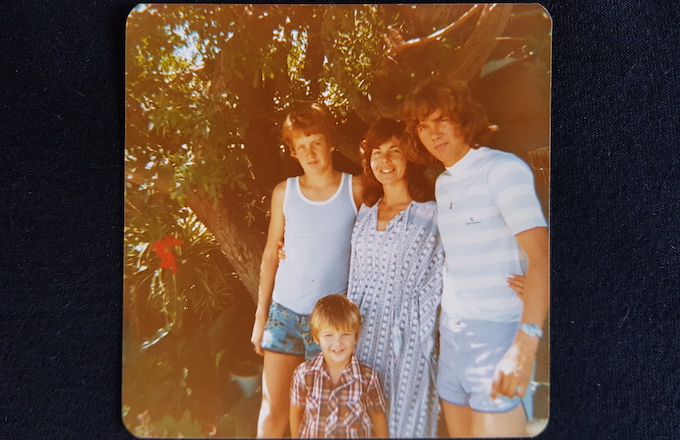 12+   Unlike my son, born in the era of digital cameras and phones, there are few photos of me from my childhood years, and even less of me as a teenager. I do have one with my mother and two of my brothers, taken on Xmas Day 1976 when I was a surly sixteen-year-old. It is a shock for this middle-aged dad to look at that photo and realise my teenage son, Jaiden, is also sixteen this Xmas!

To help me cope with the shock, I thought I’d look back over the sixteen Xmases I’ve had with Jaiden since his birth in 2002. The following are extracts from my diaries (and I’m forever grateful for my diary writing habit!) with treasured Xmas snapshots. Apart from Xmas Day itself, I’ve noticed a recurring theme runs through the diary entries, especially after 2004 — see if you can spot it …

Jaiden’s first Xmas. His early waking gave us a reason to get up and open presents. Jaiden seemed to enjoy the unwrapping as much as the presents themselves — especially eating the wrapping paper (and a CD gift voucher!). Harry enjoyed chewing his present, too, a rawhide bone, before burying it in the back garden — he returned inside covered in sand, dust and cobwebs. I enjoyed our first Xmas Day walk with Jaiden and Harry in Centennial Park. 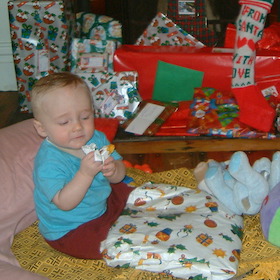 Woke to a “white Xmas”, our farm-stay cabin shrouded in a misty fog. It made for an eery and wet walk through the paddocks to the creek with Jaiden and Harry. The mist burned off during breakfast, and afterwards, we opened our Xmas presents. Jaiden got spoiled but soon lost interest, showing signs of tiredness. So we took a break for his morning nap. In the afternoon, Nanny and I took Jaiden to a beach on the Shoalhaven River. Nanny's new bucket and spade got a lot of use. 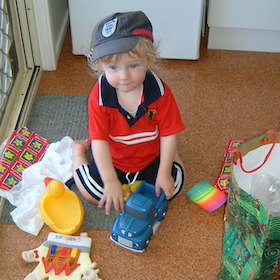 Jaiden’s big cousins woke very early and were sent back to bed at 1 AM! Jaiden woke at 6 AM, had a “good morning” chat with mum and dad and then trotted off to see his grandma. He hadn’t realised the Xmas stocking sitting on the end of his bed was full of gifts, but his cousins soon educated him. All had a great time pulling out and unwrapping the goodies from Santa. And then we moved on to opening the family presents under the Xmas tree. 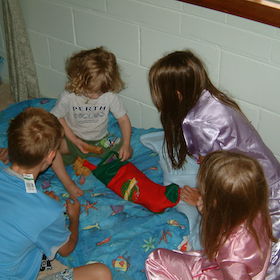 Jaiden woke very early (it was still dark outside) and came into our bedroom to tell us there was a sack from Santa on his bed. Fortunately, we talked him into going back to bed until 6 AM. It was a (bleary-eyed) joy watching Jaiden pull presents from his Santa sack. However, as much as he seemed to enjoy each gift, he’d toss it aside and unwrap another one — it was like watching a feeding frenzy. And when he had emptied the sack, he was eager to move on to the Xmas tree! 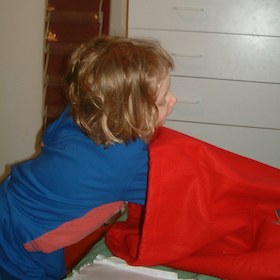 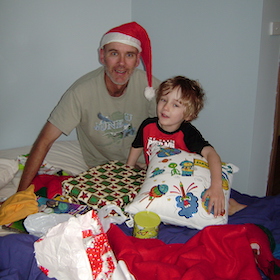 Jaiden woke at 3:30 AM (Perth time, 5:30 AM in Sydney) and wanted to explore his Santa sack. I felt around, selected one present, a Cars DVD, and flopped with him on Poppy’s sofa to watch it. Thankfully Cars took Jaiden’s mind off his Santa sack until dawn. Once again, he seemed excited by Santa’s gifts, as he was later when his uncles arrived and we opened the Xmas tree presents. Goodness knows how we will fit everything in our bags for the flight back to Sydney! 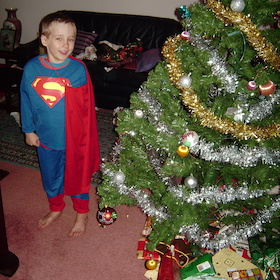 Plan for a reasonable start almost worked, but Jaiden still woke early, asking me to remind him what time he could open his Santa sack presents. Eventually gave up and let him lug it onto our bed. Lovely to see Jaiden so excited by Santa’s choices. In fact, thanks to Santa's thoughtful gifts, we didn't move on to the Xmas tree until after lunch. Jaiden's only grumble was about The Muppet Christmas Carol DVD (Bah, humbug!). But we still enjoyed watching it in the evening. 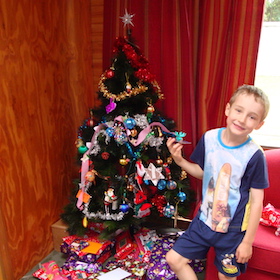 Woken in the pre-dawn Perth darkness by the sound of a spoon chinking in a cereal bowl. Thankfully we talked Jaiden back into bed until 6 AM. And yet it was worth getting up to watch the joy on his face as he reached into his Santa sack (like a lucky dip). After breakfast with the family, we opened presents from under Poppy’s Xmas tree. Jaiden was very excited to unwrap his Star Wars Lego and the Indiana Jones trifecta of Lego, PC game and DVD box set. 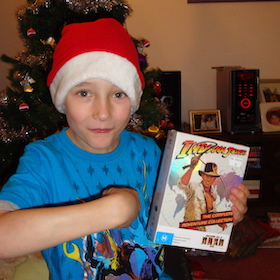 Jaiden kept his promise, opening one present from his Santa sack on waking at 6 AM, and the rest at 7 AM — though he kept checking with me for the time! He was pleased with the haul from Santa (as we were with his response) but was still keen to open presents under the Xmas tree. Jaiden and I had fun unwrapping our surfboards in the backyard. Unfortunately, waves at the beach were dumpy, and every time we managed to catch one, we’d fall off our boards. 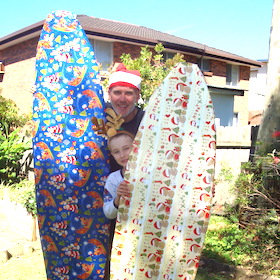 Late-night Xmas Eve meant Jaiden “slept in”, not appearing until 7 AM, having opened only one present from Santa, but eager for more. He plundered his Santa sack on our bed, happy with its contents. Kane from next door joined us downstairs and helped Jaiden open his Xmas tree presents. Both boys very good at guessing contents before unwrapping them — I have suspicions of some pre-Xmas poking and prodding under the tree! 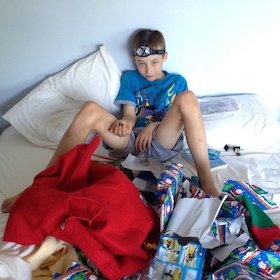 Jaiden stuck to the deal on 5 AM and 6 AM presents (one each from Santa sack on the hour) but forgot we didn’t want status updates. I’d just dozed off again and was enjoying a pleasant dream about dear old Harry when Jaiden woke me with his Santa sack at 7 AM. He looked happy with this year’s haul, but still keen to start on Xmas tree presents. Remote control car proved popular — shame it needed several hours charging before he could play with it (“Dad!”). 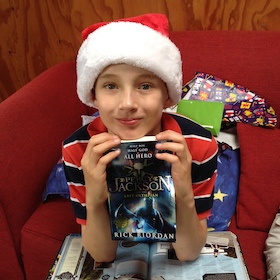 Jaiden up ridiculously early (again!). Agreed to one present from Santa, which kept him amused for about 15 minutes before he stuck his head in our bedroom to see if we were awake. The next minute he was sitting with us in bed, plundering his Santa sack. He seemed happy but was keen to head downstairs to open the HUGE present he’d seen behind the Xmas tree. Sadly Xmas Day drizzle prevented us from setting up his basketball hoop and backboard. 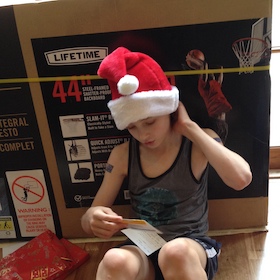 After our Xmas Eve flight back from Perth, it was a very late night for Santa, waiting for Jaiden to doze off. And then he was up at stupid-o’clock, dragging his Santa sack into our bedroom. “Jeez,” he commented, “I must have been naughty this year, Santa’s filled my sack full of coal!” Postponed the Xmas tree presents under until after we’d collected Jet from dog sitter. Like dear old Harry, Jet was as interested in opening presents from under the tree as Jaiden. 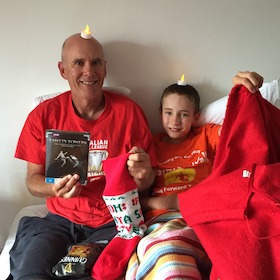 I was up wrapping presents until past midnight – Merry Xmas! Council garbage trucks were busy (and noisy) in our street from 6 AM. Jaiden was up at 6:30 AM, playing with his first present from the Santa sack, bongo drums (stupid Santa!). Gave up trying to sleep and joined him downstairs. This year he was keen to give mum and dad his presents to us from under the Xmas tree. A toasted-sandwich maker for mum and a portable “sandwich” LP record player for dad! 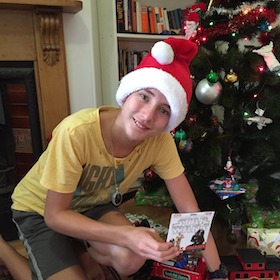 After a “difficult” Xmas Eve, it was the first Xmas when mum and dad have woken before Jaiden. I went for a walk on my own, taking in calming views of the big Clarence River, and northern rivers’ big skies. Surprised to find Jaiden still asleep when I returned. He finally woke and investigated his Santa sack. Unimpressed with Santa this year, Jaiden circled the Xmas tree like a carnivore stalking game until he got the okay to pounce. Gaming headphones were a winner. 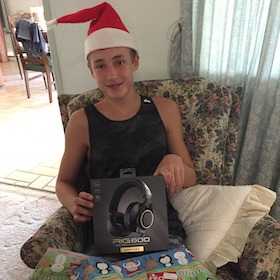 For only the second time in all of his Xmases with us, Jaiden was not up at the crack of dawn to open his presents. He appeared from his room around 8 AM and held off plundering his Santa sack until I’d fetched Xmas coffees from our local (legend!) barista. Jaiden said he was happy with his Santa sack and Xmas tree haul. But the excitement of Xmas morning seems to have waned for him (and me). Said he was looking forward to the Boxing Day Sales! 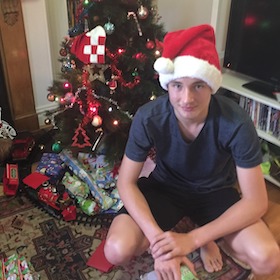 Did you spot it? Yes, Santa and mum and dad have spoiled Jaiden rotten over the years. We could probably have stocked a Toys R Us store with all the presents he’s received in the Santa sack and from under the Xmas tree — erm, on second thoughts, maybe an online toy store!

It is interesting to see how the Xmas morning “frenzy” has settled over the past couple of years, as Jaiden has got older, and perhaps more discerning — or just less keen on toys and, sadly, books.

On my wishlist for this Xmas, is that my sixteen-year-old son enjoys the presents he gets from “Santa” and from under the Xmas tree. And that when we take a family photo, he looks (and feels!) happier than the surly sixteen-year-old did back in 1976.

One thing’s for sure: however Xmas turns out, I will be taking a photo and writing it up in my diary! And so I did …

Jaiden didn’t appear from his room until 8:12 AM. Flopped beside us on the sofa to open his Santa sack presents. Only a few goodies this year, but he was happy with contents and appreciated Santa’s joke of the re-wrapping of his unopened Lego models from last year. As with previous years, Jaiden was keen to open his presents from under our make-shift AirBnB Xmas tree, especially the bulky parcel, which he knew would be his requested camping hammock. 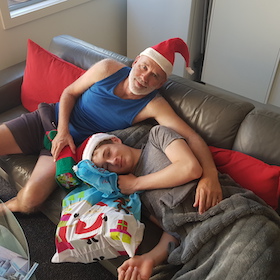 NB. My Xmas Day diary entries also mention two of our dogs: Harry, who was three-years-old when Jaiden was born in 2002 and passed away in 2011, and Jet, who was two-and-half when we adopted him in 2014. We put presents for both dogs under our Xmas tree.

You might like to read about Harry in my Tall And True piece,  A Dog Is Not Just For Xmas, and for an introduction to Jet, please see A Forever Home.