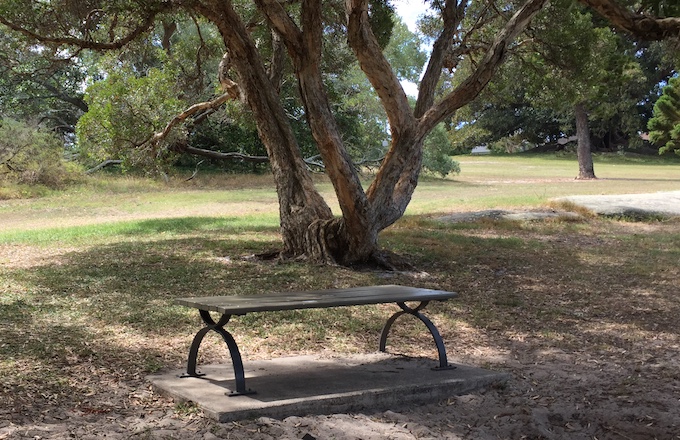 12+   I published this piece about one of my fellow Queens Park dog walkers in my local dog club’s newsletter in August 2001:

I’d known him as “The old bloke who walks Amy the lab for his neighbour”. That’s how it is with Queens Park dog walkers: I’m known as “The black lab, Harry’s dad”.

“The old bloke” walked his own dog, a Staffy, and Amy, a lab pup, for his neighbour in the mornings. We’d nodded hello to each other in the park for a couple of years and I, a lab lover, had enjoyed watching Amy grow from a gangly, excitable pup, into a solid, confident dog.

The other day I saw Amy in the park with her owner, “The bloke with a beard”. He told me that ‘John had died’ and ‘Amy was missing him’. It took a few moments to realise he was talking about “The old bloke who walks Amy the lab for his neighbour”.

That’s how it is with Queens Park dog walkers. We know each other through our dogs. I will miss you, John.

A bench under a shady tree

Shortly after John's passing, I bumped into another Queens Park dog walker, "The bloke whose dog loves to chase balls", who told me that he and other dog walkers who'd known John had raised money for a bench under a shady paperbark tree in the park.

John used to rest under this tree, sitting on a conveniently low, broad fork in the tree's trunk, before walking home with Amy and his Staffy.

A little afterwards, I saw "The bloke whose dog loves to chase balls", and fellow dog-walkers gathered around the bench, toasting it and John's memory with a bottle of champagne. Seventeen years on, it's still there, providing a shady rest for Queens Park dog walkers and their dogs.

But things have changed since then. Dog walkers have come and gone from the park. We've lost dear old dogs and brought home new faithful companions, introducing them to other dog walkers on morning and evening walks in Queens Park.

And we've grown older, too. This week I attended a memorial service for “The bloke whose dog loves to chase balls”, whose real name was Reinier, as in the Prince. Although I'd known him for over seventeen years, in truth, I knew very little about Reinier, other than as a fellow Queens Park dog walker.

At the service, I learned of Reinier's full life. As a naval cadet and officer and a husband and father. As a deeply religious man who played an active role in his church. And a man who supported fundraising for Legacy (a charity providing services to Australian defence force families). As a man who trained his new ball-chasing dog, Farley, to be an assistance dog to visit the sick and elderly in hospitals.

And a man who was so beloved for welcoming new neighbours and organising annual street parties that many in his street wanted to rename it Reinier Street!

But that's how it is with Queens Park dog walkers. We know each other through our dogs. I will miss you, Reinier.

N.B. This piece is also published on my blog at RobertFairhead.com. And you might like to read more of my writing about dogs on Tall And True.