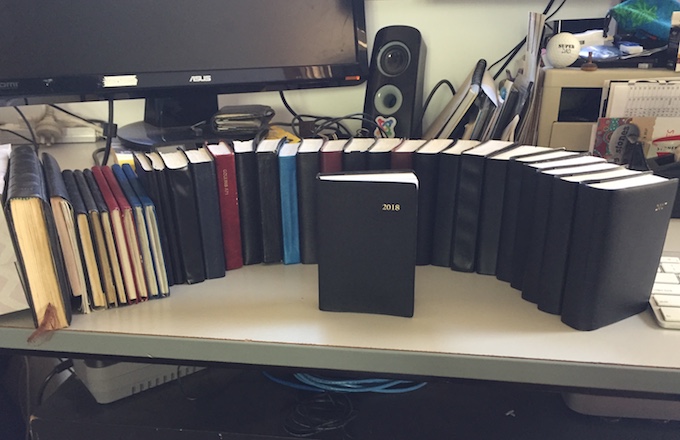 12+   In a loft cupboard at home is a cardboard box containing all the daily diaries and travel journals I've kept since I set off backpacking from Australia in 1987. The travel journals are typically re-purposed student exercise books. Each day's sights and highlights are documented over two or more pages, depending on how much travel and sightseeing I'd done during the day. And how much time I'd had in the evening to write up the journal entry.

By their nature, daily diaries of work and everyday life are less exciting than travel journals, and it took me many years to settle on a format that gave me room to jot down the day's main events without feeling like it was a chore to do so. My 1987 diary was an unwieldy "tome", which I downsized in the late 1980s to mid-90s for slim, week-to-an-opening suit-pocket diaries. Until finally, in the late-1990s, back in Australia, I settled on "Belmont" A7, page-to-a-day pocket diaries.

When I posted a photo of my 32 years of diaries to Facebook on New Year's Eve, a friend asked if I read them often. No, I admitted, though I did revisit my overseas-years (1987-1995) before returning to England for a holiday in 2007. Many entries were difficult to read because I'd written them in tiny print using a thin pencil. The graphite had smudged, and my eyesight is not as good as it was in the 1980s and '90s, so in some cases, I had to guess what I'd written.

Also, there was a degree of embarrassment over many of my diary entries. I was in my mid-20s when I started keeping a diary. But my early efforts read like The Secret Diary of Adrian Mole, Aged 13 3/4 by Sue Townsend. I offer this from the morning after the Great Storm of October 1987 as an example:

A storm blew in overnight, bringing hurricane-force winds which tore branches from some trees and completely uprooted others. Our street was cut off by fallen trees, some missing cars and houses by only a few feet. The whole street looked devastated. Walked to the beach past more shattered and uprooted trees, fences blown down, rooves missing tiles, more fallen trees blocking roads. Waves crashed onto the pebbled beach and the wind was so strong it was hard to stand still. A number of beach sheds had been completely destroyed by the wind. It was so sad to see what had happened. I hope I never see anything like it again!

Okay, so teenage Adrian would have complained the storm had given him a sleepless night, and he'd had to struggle over the fallen trees to visit his true love, Pandora. But the entry is reminiscent of something mundane he'd have written in his diary, only without Sue Townsend's brilliant touch of humour.

To my credit, my diary writing improved over the years, with this entry from June 2002, on the birth of my son, being a particular favourite:

Those who say the birthing process is a wonderful experience are only speaking of the birth itself. Everything leading up to the point when the newborn is delivered is awful. The mother-to-be is in agony and the father-to-be feels useless and guilty for causing so much pain! I bawled when Junior's enormous head finally popped out into the world. And sobbed when I realised that despite his seemingly long and difficult birth, our son was alive and I would soon hold him. I was now a dad.

Reading this entry transports me back to the hospital room on the morning my son was born. Perhaps it's only the emotional moments I can successfully record in succinct detail, like this entry from October 2011, about my dear old black Labrador:

Harry looked up at me but didn't get off his bed when I opened the laundry door. When he finally tried to stand, he couldn't support himself and fell splay-legged on the tiled floor. I cradled his tummy and helped into the kitchen and onto his mat. He wagged his tail, laid down on his side and didn't move again. I knew it was time. I called the vet and organised for a vet and nurse to visit us. Then I sat with Harry, his head resting on my lap, as I looked through old photos of him and the family on the laptop, and waited for the vet to arrive.

It was two and a half years before we adopted a new black Labrador, another emotional though happier moment, recorded in my diary in March 2014:

Text from Labrador Rescue with photos of Jet - have we found our new Lab? After a positive phone call decided we'd "have a look", meeting foster carers at Liverpool animal refuge (a 50-minute drive for us and a one and a quarter hour drive for the foster carers!). Couldn't believe how good Jet looked. He's excitable and pulls on his leash, but he's keen on treats, so decided we'd adopt him. Overcome with emotion and cried when signing adoption papers: tears of happiness at adopting Jet and of sadness remembering Harry.

The quality of my diary entries has gone up and down over the years, reflecting how I've felt "on the day". And before 2005, there were many blank entries in my diaries. Either nothing of interest happened, or I didn't feel like writing up the day. However, on New Year's Eve 2004, I made a rare resolution to write up every day. And to date, unlike other New Year's resolutions, I've stuck with it.

Mind you, diary entries in the past dozen or so years of being a dad and dog owner have been along the lines of:

Woke early, walked the dog, got son ready for school, did dishes and housework, shopped for dinner, and hoped, but failed, to make a start on overdue writing project. Knocked back offer from UN to solve world's problems, because son has sport after school and on weekend.

Oh well, at least I've taken to writing my entries using a fine point pen instead of a pencil and in slightly larger print, so hopefully, I'll be able to read my more recent diaries in another 10 or 20 years!

N.B. I originally posted this piece on my blog at RobertFairhead.com along with a promise to share some of my "better" entries from 32 years of diaries on Twitter with the hashtag #32YearsOfDiaries!