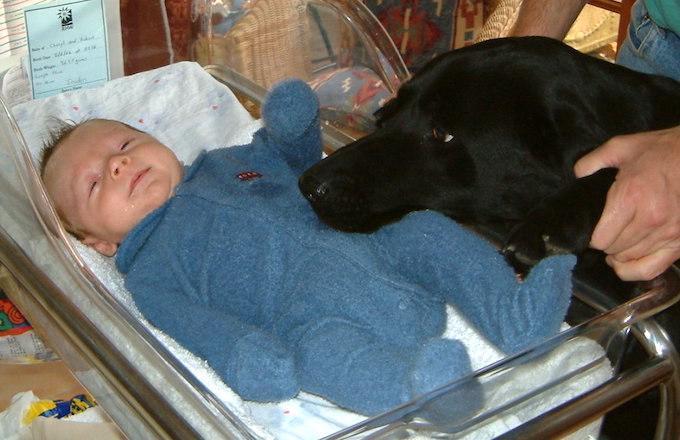 New Baby in the Pack

-12   When my wife and I told family and friends we were expecting our first child, their first response was, "Harry's nose will be put out of joint!" I was determined our three-year-old Labrador's nose would not be put out by, nor would he be shooed outside, away from the new baby in the pack.

I was confident Harry would accept our child. His breed partly inspired my confidence: Labradors are generally good family dogs. He'd also interacted with our nephews and nieces and friends' children. And Harry had had three years of training at my local dog club.

Robin Barker, in her book The Mighty Toddler (Amazon affiliate link), recommends parents "train [their] dog to obey commands. For example, Sit, Come and Stay." These are basic commands for a well-trained dog, like Harry. And lay the foundation for further training and control.

When my wife came home from the hospital, she greeted Harry on her own to let him get over the excitement of seeing her again. Then I carried our son into the house and laid his bassinette on the floor while my wife held Harry's collar.

Our son was left unswaddled, so Harry could see he was a mini-us, with arms and legs. And not, as Barker describes in her earlier book, Baby Love (Amazon affiliate link), a "mewing meal". Harry sniffed him and gave him little licks. And if Harry got too vigorous, my wife pulled him back by his collar, commanded "Gentle" and praised his good response.

"Gentle" proved an excellent command for checking over-exuberance in Harry and our son as he got older and played more with Harry, starting with tail and ear pulling! Four-and-a-half years have passed. There have been jealous moments and the odd accident, but Harry has repaid my confidence.

In truth, I ensured he did so by not banishing him when our child arrived. Harry still gets walked; he's brushed, fed and played with; and he and our son interact as naturally as possible. And I still train Harry.

Dog training brings many rewards, none as important as the safe relationship between a dog and a new baby in the pack.

This article appeared in the Village Voice Eastern-Harbourside in March 2007, titled: When Harry Met Jaiden.

Please note: dogs interaction with children, especially young children, should always be monitored. Never leave a dog alone with a young child, even a dependable dog, like Harry!